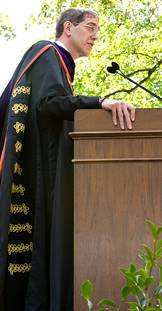 Christopher L. Eisgruber gives an inaugural address during his installation as Princeton University's 20th president on Sunday, Sept. 22, on the front lawn of Nassau Hall. He said the University must ensure that liberal arts education remains a vital foundation for improving individuals' lives and advancing society.

Christopher L. Eisgruber gives an inaugural address during his installation as Princeton University's 20th president on Sunday, Sept. 22, on the front lawn of Nassau Hall. He said the University must ensure that liberal arts education remains a vital foundation for improving individuals' lives and advancing society. 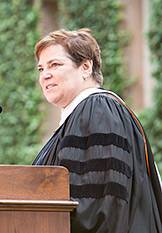 In her opening remarks, Chair of the Board of Trustees Kathryn Hall said Eisgruber is a president who is one Princeton's sons, one of its faculty and one of its gifted administrators.

In her opening remarks, Chair of the Board of Trustees Kathryn Hall said Eisgruber is a president who is one Princeton's sons, one of its faculty and one of its gifted administrators.

A video of highlights from Christopher L. Eisgruber's installation as the 20th president of Princeton University.

A video of highlights from Christopher L. Eisgruber's installation as the 20th president of Princeton University. 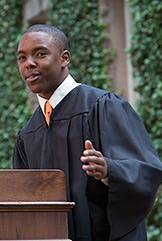 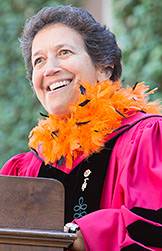 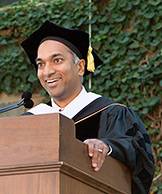 University Counsel Sankar Suryanarayan said "we, the staff, had the privilege" of working with Eisgruber as provost for the past nine years and look forward to working with him as president for many years to come.

University Counsel Sankar Suryanarayan said "we, the staff, had the privilege" of working with Eisgruber as provost for the past nine years and look forward to working with him as president for many years to come. 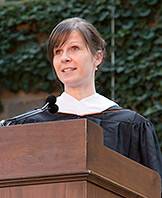 In her greetings, Friederike Funk, president of the Graduate Student Government, wished Eisgruber the courage and wisdom to make the right decisions, to be a pioneer and to shape the field of higher education.

In her greetings, Friederike Funk, president of the Graduate Student Government, wished Eisgruber the courage and wisdom to make the right decisions, to be a pioneer and to shape the field of higher education.

With a University history spanning 267 years, and with only 20 presidents throughout this time, the installation of a new leader of Princeton is a momentous occasion.

Note: The installation ceremony and President Christopher L. Eisgruber's address are archived online and available for viewing on the University's Media Central site.

At his installation as Princeton's 20th president on a breezy first day of fall, Christopher L. Eisgruber said the University must ensure that liberal arts education remains a vital foundation for improving individuals' lives and advancing society.

Eisgruber's heartfelt address on Sunday, Sept. 22, to the crowd of more than 1,000 on the front lawn of Nassau Hall underscored Princeton's influence on him, and in turn, his devotion to the University. He traced his path from his days as an undergraduate, to his return as a professor and provost, to his new post as president. 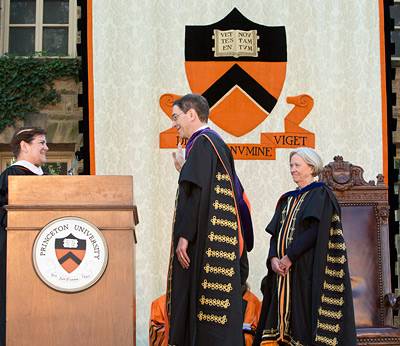 Eisgruber re-enacts the taking of the oath of office administered by Chair of the Board of Trustees Kathryn Hall (left), while his predecessor, President Emerita Shirley M. Tilghman (right), looks on. Eisgruber took the oath at the June trustees meeting before he officially began as president on July 1.

"I am honored to accept the presidency of this, our beloved University," said Eisgruber, a Class of 1983 graduate. "I will work with you enthusiastically to sustain the excellence of what we are doing now; to realize more perfectly the ideals to which we are committed; and to demonstrate by argument and deed the extraordinary value of Princeton University, and of all the colleges and universities that help to bring out the best in the people of this country and this world." 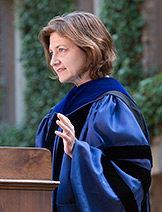 Deborah Prentice, the Alexander Stewart 1886 Professor of Psychology and Public Affairs, spoke of the congenial relationship and partnership between the faculty and University administration.

The installation was a celebratory, public occasion to welcome Eisgruber as president. Alumni, faculty, staff, students and higher education leaders traveled from across campus, the country and the world to hear Eisgruber's inaugural speech and watch him re-enact the oath. Eisgruber took the oath of office at the June meeting of the Board of Trustees before he officially became president on July 1.

The installation ceremony began with a procession of University trustees and officers, faculty, local representatives, and 19 Princeton alumni and former faculty and staff who are presidents of colleges and universities.

"Today we entrust the leadership of this institution … to a president who is one of its sons … one of its faculty, one of its gifted administrators," Chair of the Board of Trustees Kathryn Hall said in her opening remarks. "A man who knows this institution well, who shares our deep devotion to it, and who we are confident will guide it with intelligence and judgment, with imagination and courage, with integrity and wisdom, and with abiding principles of excellence, honor, justice and truth." 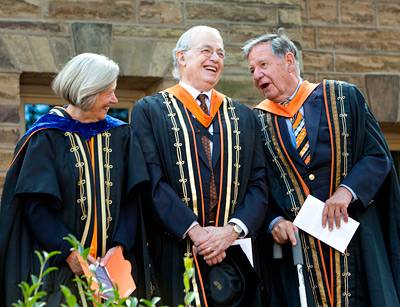 Former presidents (from left) Tilghman, Harold T. Shapiro and William G. Bowen laugh together during a ceremony that included many light-hearted moments.

Joined on stage with University officers, trustees, faculty and his three immediate predecessors — former presidents Shirley M. Tilghman, Harold T. Shapiro and William G. Bowen — Eisgruber wore a black gown with 20 gold bands to represent the number of presidents who have guided Princeton since its founding in 1746. He smiled warmly as he received well wishes from representatives of the University and higher education community. 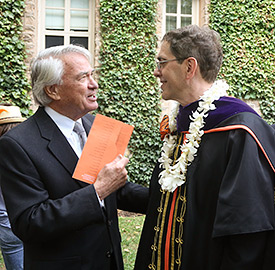 As he began his remarks, Eisgruber humbly admitted he never would have imagined this day when he arrived at Princeton as a student, nor when he first joined the faculty in 2001 as a Constitutional scholar — his "dream job."

"I thought that by becoming a law professor at a university without a law school, I had reduced if not eliminated any chance that large administrative assignments might ever distract me from the teaching and research that I loved," he said as the crowd laughed.

"Of course, by returning to Princeton, I had also come home to a university that I loved more than any other, and where the responsibilities of administration would be more meaningful to me than anywhere else." 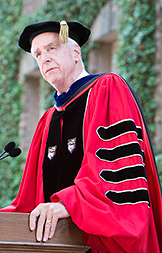 Hunter Rawlings III, president of the Association of American Universities, gave greetings to Eisgruber on behalf of the worldwide community of colleges and universities.

Among the most pressing responsibilities, Eisgruber said Princeton must lead a renewed commitment in America to the ideals of a liberal arts university.

He said liberal arts education, like constitutionalism, is an enduring enterprise that aims to "cultivate our talents, orient us toward the common good, and make us the best that we can be."

He added: "Great teachers, and great universities, make extraordinary investments in students and research in anticipation of future benefits that are usually unknowable and occasionally implausible."

But in today's world where we "demand that messaging be instant and we talk in tweets," Eisgruber said notions of the common good and promises about future returns feel abstract when compared with immediate results. 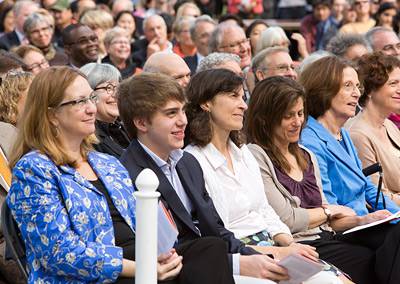 Members of Eisgruber's family take in the ceremony.

Princeton, he said, has an opportunity to play a leadership role in public discussions about the value of research and collegiate education today. It has an obligation to answer those who question whether a college education is worth the cost. 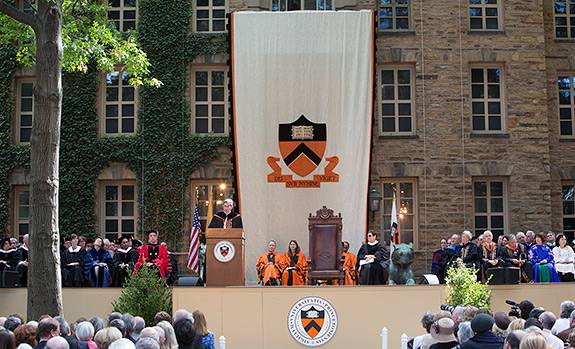 A crowd of more than 1,000 attended the installation ceremony on the breezy, first day of fall. Eisgruber was joined on stage by University officers, trustees, faculty and higher education leaders.

"Make no mistake about it: those of us who lead universities must make our institutions as efficient as possible. We must also ensure, through financial aid and other programs, that our colleges are accessible and affordable to students from every sector of our society," he said. "But there is a difference between expense and inefficiency. Expensive investments can be both efficient and valuable if their returns are sufficiently high."

For example, he said, "when professors provide individual attention to students, their time is expensive and valuable."

Eisbruger gathers with classmates from the Class of 1983, many proudly sporting their orange-and-black class blazers.

Reflecting on his own experience, Eisgruber recognized two teachers in the audience who have served as mentors throughout his career: Pat Canan, his physics teacher at Corvallis High School in Oregon, and Jeffrey Tulis, an associate professor of government at the University of Texas-Austin who previously taught political theory at Princeton when Eisgruber was an undergraduate.

"Great colleges and universities are not cheap. They require big investments, and they are also among the very best investments that this nation, or any nation, can make," Eisgruber said. "And, as I have said in the past, great universities are also places where the human spirit soars. They are special communities where students, teachers and researchers strive to transcend their limitations and, on occasion, to expand the boundaries of human achievement." 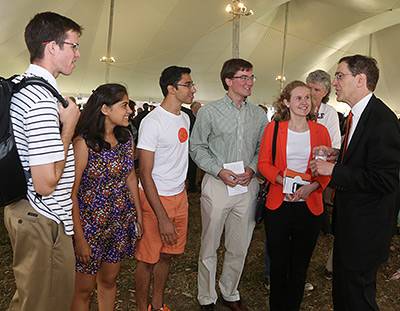 At the reception, freshmen gather to meet the new president, who also is looking forward to new beginnings.

In closing, Eisgruber called on the University community to rededicate itself to Princeton's basic convictions, which will guide his leadership as president. 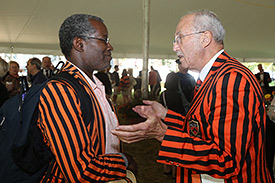 The reception offered an opportunity for members of the Princeton community — including many alumni — to catch up with each other.

Following the installation, students, faculty, staff, alumni and guests gathered for a reception on the lawn behind Alexander Hall.

"I wanted to bring them to see a little part of Princeton history," said Ravida, a junior. "I really loved what President Eisgruber said in his speech about the value of higher education. It was great for my freshmen coming in to hear that all their hard work will pay off."

Blessing Agunwamba, a member of the Class of 2010, said the installation was a wonderful reason to spend the day on campus.

"I hope he continues on the track that President Tilghman established for diversity," she said. "It's lovely every time we come back to see how each subsequent class looks more and more diverse. And I hope the diversity is not just in looks, but in [students'] socioeconomic backgrounds, cultures, everything, because I feel that will enrich the lives of everyone at Princeton." 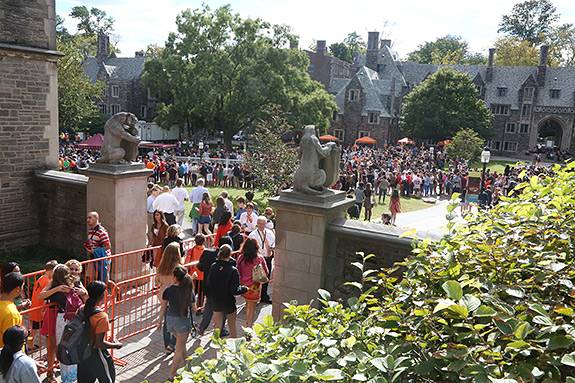 Following the installation ceremony, students, faculty, staff and alumni streamed into Blair courtyard for a concert by Grace Potter & The Nocturnals.

Wearing his orange-and-black striped class blazer, Class of 1983 member Robert Adler said he is looking forward to Eisgruber's tenure as president as a fellow classmate and as a parent of a Princeton freshman.

"President Eisgruber's experience as provost for the last nine years means he knows Princeton inside and out, and he clearly knows the issues facing society and Princeton," Adler said. "He is very committed to liberal arts education."

The day's festivities concluded with a concert by Grace Potter & The Nocturnals at Blair Arch. 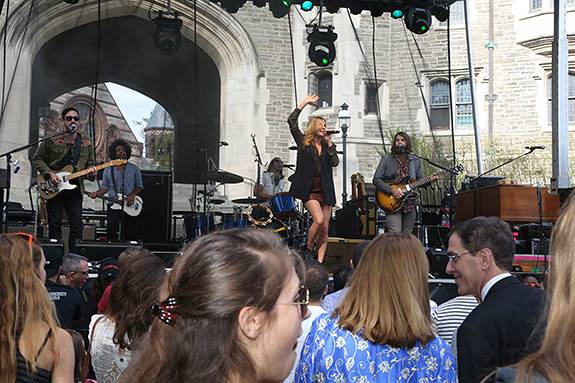 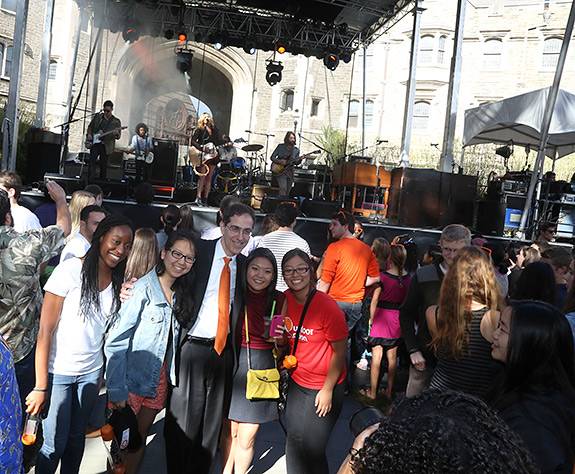 Eisgruber poses with students enjoying the concert on the sunny afternoon in front of Blair Arch.

Installation day started with Eisgruber reviewing his address before processing to the front of Nassau Hall and taking the presidential seat looking out at the crowd. 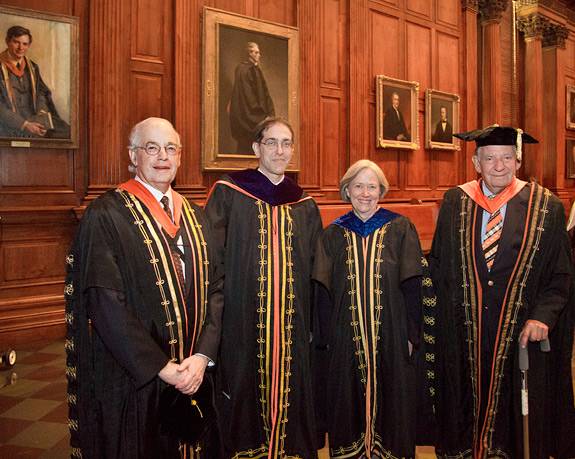 Installation of President Eisgruber to begin outdoors at 1 p.m.