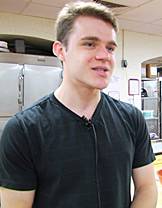 A person can almost taste these and other delectable derivations of Theobroma cacao's bitter seed as Greg Owen muses about his plans for the Institute for Chocolate Studies (ICS) student club. A rising junior at Princeton University, Owen is the president and founder of the ICS, which was established in October 2012 as the University's first student-run chocolate manufacturer. The group makes its own chocolate (as seen in this video) from "bean to bar," which means ushering raw beans imported from far-flung locales such as Venezuela or Peru through a process of roasting, shelling, mixing, melting and cooling.

More than just a love of chocolate, the exploration and mastering of the precise and sometimes-exasperating process of chocolate making is what draws ICS members to spend around eight hours of their weekend evenings in the University Bake Shop. Chocolate making is a fickle pursuit that is extremely sensitive to heat, time and measurement. What could be more enticing to a computer science major such as Owen and the mostly physics, neuroscience and engineering majors who make up the 16-member club?

"We're not a chocolate-appreciation society — we're a chocolate factory," said Owen, noting that when he recently clarified this to prospective 2013-14 members, applications dropped from nearly 40 to eight. "We are a group of people who do stuff roughly like this for our majors every day," he said. "There is some satisfaction in applying what we learn in class to the problems we encounter. Yet we're not in class. If we mess up we can start over, and in the end we get chocolate."

And, ideally, other people get some too. The ICS has distributed and sold (not-for-profit) some of their product, currently limited to dark-chocolate (75 percent cocoa) bars. The club hosted a booth and gave a standing-room only demonstration of their chocolate-making process at Reunions 2013 in May. The ICS has permission to sell their treats at the C-Store in Frist Campus Center.

But ever since Owen first explored chocolate making for his high school senior project, he has learned that a cottage industry chocolatier gets used to disappointment. "There's a lot more to chocolate making than I expected when I started this project," Owen said. "The science of chocolate making is very fine — our understanding of it is probably not as fine. But we have a good idea of what should be happening at each step."

Making chocolate from raw beans consists of several steps: cleaning the raw beans to diminish their naturally bitter flavor; roasting the beans (which resemble wilted almonds); separating the outer shell from the "nib," or lump, of raw cocoa through a process called winnowing; liquefying the nibs into "chocolate liquor" that is mixed with sugar during a stage known as melanging; and finally tempering, during which the chocolate is slowly brought to an ideal solid state.

Tempering is when chocolate takes the form people know and love — so, of course it's the hardest and most scientifically exact part of the process. Nearly all of Owen's plans for the ICS hinge on it.

Tempering more or less means mediating a battle for dominance between the six forms in which the fats in cocoa butter can crystallize. A chocolatier wants "form five" crystals — this produces the glossy chocolate with the firm snap that can withstand temperatures around the human body temperature. "Form four" is nearly as good, though melts easier and lacks the crispness and sheen of form five. Lower forms crumble and melt in temperatures matching a warm spring day, while "form six" equates to a chocolate rock.

"The whole idea of tempering is just to get the chocolate to crystallize properly," said rising junior Mark Stone, who is majoring in mechanical and aerospace engineering. "We have to get it from the syringes into the molds very quickly because the chocolate will cool down and get gummy. Then it's impossible to work with and it usually doesn't cool well."

Form five crystals thrive at around 90 degrees Fahrenheit, but perish at temperatures less than 86 — so there are only roughly 4 degrees standing between perfect chocolate and the drab, crumbly forms beneath it. Once the liquid chocolate is heated to 110 degrees, it must be slowly cooled to and held at the ideal temperature. The process takes about four to five hours, Owen said. Cool it too fast and "you get a nasty effect," he said. All six forms of crystals develop at once and push the cocoa fat to the surface to produce a cloudy film known as a "fat bloom." Anyone who has refrigerated melted chocolate may have seen this phenomenon.

Industrial chocolate makers breeze through tempering with massive machines featuring computerized temperature control. The ICS uses a microwave (Owen hopes to upgrade to a hot plate) and a thermometer. The process can be as tedious as it sounds. If tempering goes wrong, the chocolate must be melted at 110 degrees and the process begun anew — which Owen and his friends know all too well.

"Tempering is pretty much the only remaining problem for us to solve. We have everything else down," Owen said. "It's frustrating, but when we get a bar that is glossy and perfect it's hugely exciting. Once we figure this out we can start doing any number of the things we want to do."

Roasting, while just as sensitive as tempering, is more art than chore, the time when "you experiment and make your mark," Owen said. Experimenting with baking times and temperatures can produce a range of flavors. Like your chocolate a little bitter and nutty, or perhaps with a deep, semi-sweet cocoa taste? It can come down to a matter of minutes in the oven.

"The learning process mostly includes figuring out the right temperature at which the beans reach their ideal flavor," said Rachna Vyas, a rising senior majoring in the Woodrow Wilson School of Public and International Affairs. "It's a bit complicated because it varies depending on where the beans actually come from."

Long hours smashing beans and heating (and re-heating) liquid chocolate wear on a person, Owen said. The linchpin of the ICS is not the confections — it's the members.

"What sustains us from the time we start to the time we finish is the friendship," Owen said. "At a certain point, making chocolate might not be enough for some people. If you confront failure again and again and again, you're going to get frustrated. But because we're friends and know each other it helps us push through.

"Many people have said that they keep going because they don't want to let the team down — that's a fantastic motivator," Owen said. "We sometimes say that our unofficial motto is, 'Come for the chocolate, stay for the friends.'"

Freshmen get a taste of chemistry — through chocolate