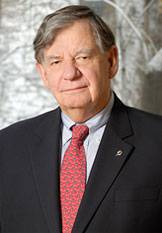 Former Princeton University President William G. Bowen, whose career in higher education has spanned more than half a century, was awarded the National Humanities Medal by President Barack Obama on July 10 at a White House ceremony.

The medal honors those whose work has deepened the nation's understanding of and engagement with the humanities, or helped preserve and expand access to important resources in the humanities. Bowen is among 12 individuals to be presented with the award.

The medal also was presented to historian Natalie Zemon Davis, the Henry Charles Lea Professor of History, Emerita, who taught at Princeton from 1978 to 1996, and served as director of the Shelby Cullom Davis Center for Historical Studies.

"Bill Bowen is one of the great figures in American higher education," said Princeton President Christopher L. Eisgruber. "His legendary leadership of this University simultaneously elevated Princeton's stature and strengthened its core values. After stepping down from the presidency, he resumed his scholarly study of higher education, producing research of unsurpassed quality.

"Bill's work emphatically supports the need to make college education accessible to all groups within our society, and it has had a major impact on public policy debates and university leadership. I am delighted that President Obama has chosen to honor Bill with this well-deserved award," Eisgruber said.

Bowen, a 1955 graduate of Denison University, earned a Ph.D. in economics from Princeton in 1958 and joined the faculty the same year. In 1967, he was appointed provost. In 1972, when he was 38 years old, Bowen was installed as president.

He retired in 1988 to become the president of the Mellon Foundation, where he served until 2006. The foundation makes grants in areas that include higher education and the humanities. Under Bowen, the foundation created an in-house research program to examine doctoral education, collegiate admissions, independent research libraries and charitable nonprofits.

Bowen's interest in the application of information technology to scholarship led to a wide range of initiatives, including the creation of JSTOR and ARTstor, academic databases that focus on the humanities and the arts. Bowen continues to carry out work related to the impact of technology and higher education through his association with ITHAKA, which provides services to the academic community centered on digital technologies, and which he co-founded in 2004 with Kevin Guthrie, a member of Princeton's Class of 1984. This year, ITHAKA and Princeton University Press co-published Bowen's book, "Higher Education in a Digital Age," which focuses on the economic challenges facing higher education and how technology might help address them.

The official citation for the National Humanities Medal honors Bowen "for his contributions to the study of economics and his probing research on higher education in America. While his widely discussed publications have scrutinized the effects of policy, Dr. Bowen has used his leadership to put theories into practice and strive for new heights of academic excellence."

Bowen has published widely on higher education and is the author or co-author of some 20 books. Bowen's 2011 book, "Lessons Learned: Reflections of a University President," draws upon his leadership of Princeton and offers insights into the challenges that almost every college or university president faces — from cultivating relationships with trustees and recruiting administrative team members to setting academic priorities and fundraising.

Other books, including "The Shape of the River: Long-Term Consequences of Considering Race in College and University Admissions" (1998) and "Equity and Excellence in American Higher Education" (2005), expand on Bowen's commitment to the importance of seeking diversity in building faculty and student bodies.

During his tenure at Princeton, Bowen took leadership roles in a number of key initiatives. As provost, he worked with President Robert F. Goheen in planning and overseeing the University's move to undergraduate coeducation in 1969, as well as promoting increased diversity, expanding financial aid and working to form the Priorities Committee, a group of faculty, students and staff that serves as a mechanism for recommending fiscal and programmatic priorities. The reports he wrote on managing the needs of the university in an age of financial restraint were circulated widely by the American Council on Education.

As president, he oversaw the creation of the residential college system, the construction of five new buildings, the expansion of 12 others and the renovation of numerous facilities.

Following his presidency, Bowen continued to give public lectures at Princeton and beyond. In 2000, he delivered the Romanes Lecture, "At a Slight Angle to the Universe: The University in a Digitized, Commercialized Age," at the University of Oxford.

In addition to Bowen and Zemon Davis, one other winner of this year's National Humanities Medal has Princeton ties: sportswriter and NPR commentator Frank Deford is a 1961 Princeton graduate.

The National Humanities Medal, inaugurated in 1997, is sponsored by the National Endowment of the Humanities. More information on the winners can be found on the endowment's website.