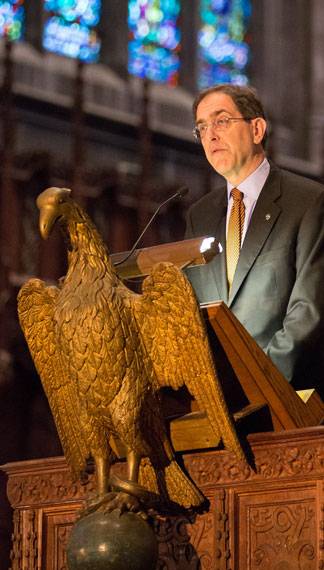 Friends and family recalled the life and influence of late President Emeritus William G. Bowen during a celebration of his life in the University Chapel on Dec. 11. In his opening remarks, Princeton President Christopher L. Eisgruber recalled Bowen as a gifted administrator and tireless champion of equality in higher education.

The cold day could not subdue the warmth with which friends, colleagues and family recalled the long life and lasting influence of President Emeritus William G. Bowen during a celebration of his life in the University Chapel on Dec. 11. Bowen, who served as Princeton's 17th president from 1972 to 1988, died Oct. 20 at age 83. A recording of the event is available on Princeton's Media Central website.

In his opening remarks, President Christopher L. Eisgruber recalled Bowen as a gifted administrator and tireless champion of equality in higher education.

"Future historians will undoubtedly regard Bill Bowen as one of Princeton's greatest presidents and, indeed, as one of the greatest presidents ever to lead any American university," Eisgruber said. "They will, I expect, also name him as perhaps the single most influential and important American scholar of higher education, a man with a passionate dedication to, as he himself put it in the title to one of his many books, both equity and excellence in higher education."

A professor of economics and public affairs, Bowen worked to build the University's academic reputation by creating new departments, emphasizing the arts and life sciences, and attracting first-rate professors. He tripled the size of the endowment, worked to diversify the student body, and oversaw the establishment of the residential college system. Bowen also wrote numerous books — many of them seminal — related to issues in higher education, particularly affirmative action.

Eisgruber also addressed the deep personal connections Bowen had with many of the roughly 250 people in attendance. "I would wager that most of you are here not because of Bill's many and spectacular professional accomplishments, but because of deeply felt connections of a more personal character," said Eisgruber, whose friendship with Bowen began during an advice-seeking lunch shortly after Eisgruber became Princeton's provost in 2004. "Bill was generous with his time, his insight, his support and his counsel. He touched an astonishing number of people as a leader, a teacher, a colleague and a friend." 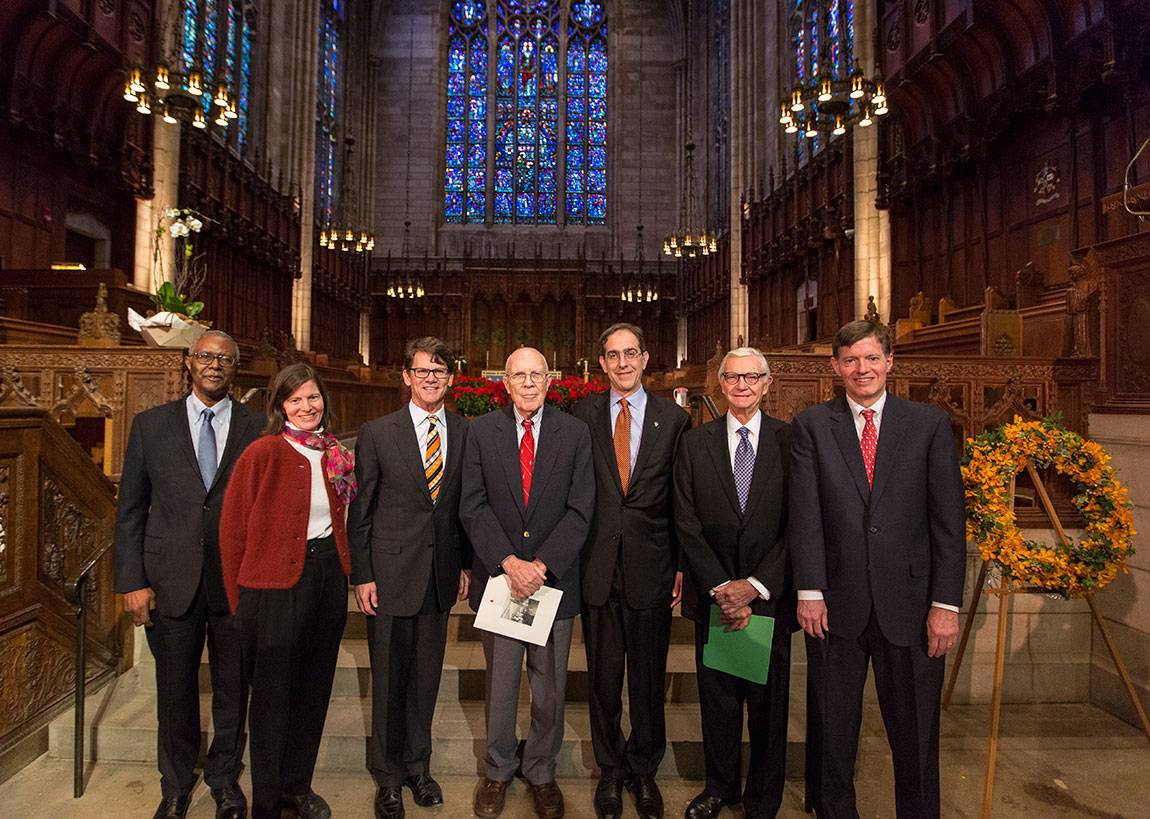 David Bayley, the first of six speakers who reflected on their connections to Bowen, met Bowen on Sept. 18, 1951, when they were first-year students at Denison University in Ohio. The two developed a close friendship that endured up to the time of Bowen's death — they were colleagues and confidants who took part in each other's weddings, took family vacations together and turned to one another in difficult times.

Bayley, a distinguished professor, emeritus, at the State University of New York-Albany who received his Ph.D. degree in politics from Princeton in 1961, attributed their long friendship to Bowen's helpfulness, inclusiveness and infectious laughter.

"My oldest friend is dead and my heart hurts. At the same time, I know by looking at this audience, many of you will share this feeling of mine because not only does my heart hurt, but it's also filled on this occasion with Bill," Bayley said.

"You have experienced his willingness to help, his generous spirit and his laughter," he said. "So, I say, I think on behalf of all of us, that I'm not unique — I share with you these qualities of friendship. We, all of us, are blessed indeed to have had such a friend." 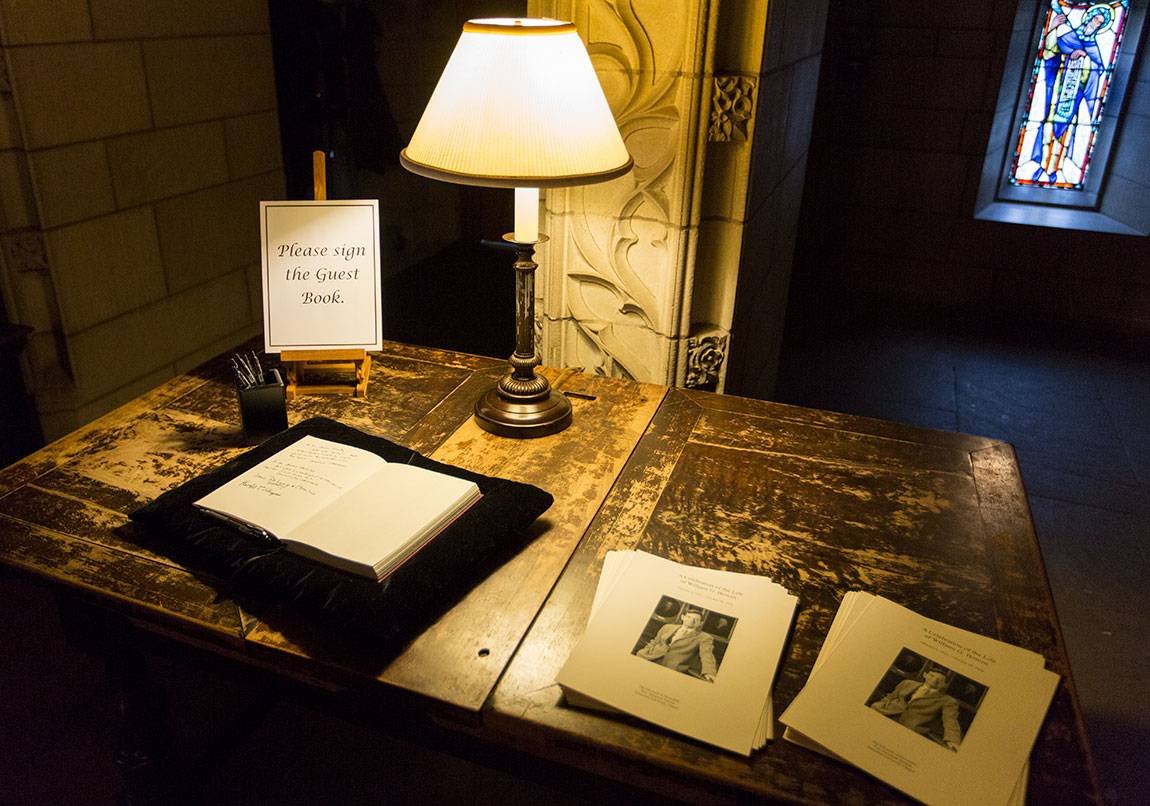 Bowen, who served as Princeton's 17th president, died Oct. 20 at the age of 83. As president, Bowen built up the University's academic reputation, tripled the size of the endowment, worked to diversify the student body, and oversaw the establishment of the residential college system. A professor of economics and public affairs, Bowen also wrote numerous books related to issues in higher education, particularly affirmative action.

Speaker Jerome Davis of Princeton's Class of 1971 described how his nearly 48-year friendship with Bowen began in 1969 with the Black Panther Party wanting to secure an event on campus by frisking Princeton students. Davis, a first-year student, had been invited to a committee meeting convened by then-Provost Bowen to consider the organization's insistence that they be allowed to search students entering Dillon Gym to hear a speech, a request the committee unanimously denied.

Davis, now secretary of the university at Columbia, said that Bowen — whom he called the "most prominent conscience of the University" — exhibited the same thoughtfulness, sensitivity and courage at that meeting that he brought to nearly every challenge set before him, especially in regard to issues of inclusion.

"From the beginning I saw that his approach to delicate and complicated educational, social and racial issues started with a deep respect for others as his peers," Davis said. "In addition to driving progress in Princeton's admissions, faculty recruitment and curriculum, Bill wrote and spoke out, often in hostile settings, for the less recognized, advancing intellectual and data-driven arguments."

"Bill was brilliant. He was fast. He was tireless," said speaker Kevin Guthrie of Princeton's Class of 1984, who began working with Bowen at the Andrew W. Mellon Foundation in 1992. The two eventually co-founded the nonprofit organization ITHAKA — of which Guthrie is president — which pushes for the digital preservation of scholarly material, and owns the digital library website JSTOR.

Guthrie described the baffling ease with which Bowen could dictate letters and responses one after the other in "one take," or in a single weekend, write the core chapters of his next landmark book. But Bowen's powerful influence also stemmed from his ability to establish meaningful relationships with nearly anyone. Their relationship, Guthrie said, began in 1984 when he received a handwritten note of congratulations from then-President Bowen. This led to a chance encounter that ended with Guthrie living with the Bowens after graduation.

"The true essence of this man was his deep and relentless commitment to personal relationships," Guthrie said. "He loved building them, and he loved cultivating them. He loved people from every background and walk of life." 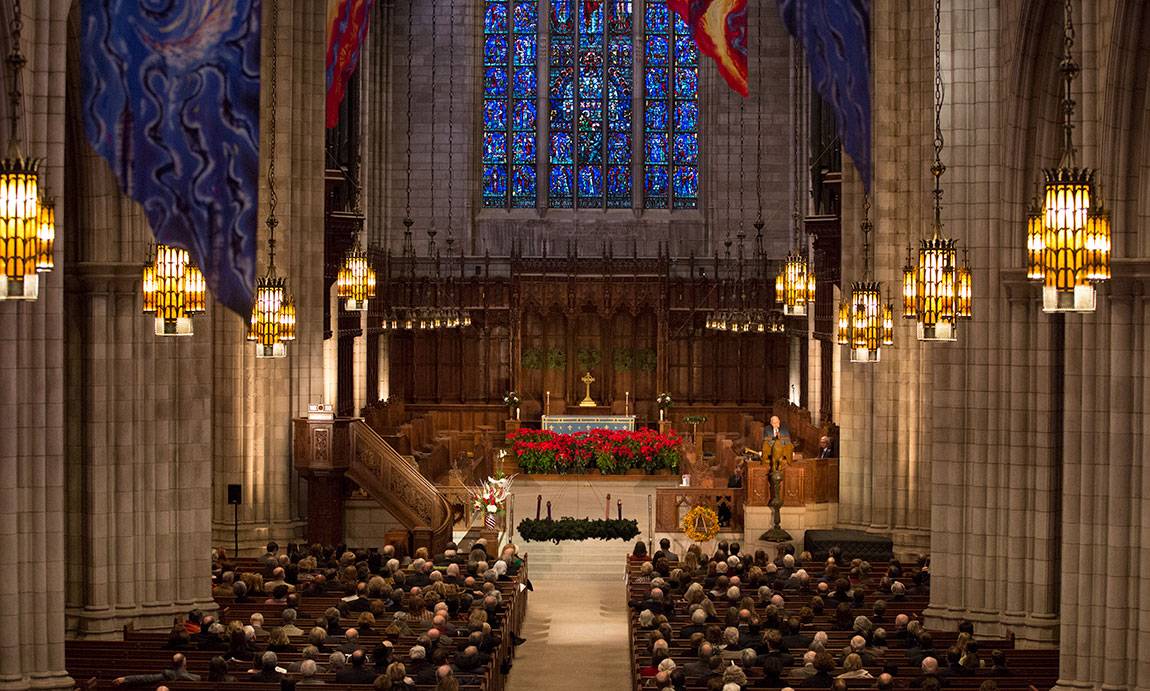 The roughly 250 people in attendance shared professional and personal relationships with Bowen. Speakers remembered Bowen as a loyal and committed friend, a trusted adviser, and an industrious and brilliant scholar.

W. Taylor Reveley of Princeton's Class of 1965 and now president of the College of William and Mary, was seeking a summer job before law school when Bowen, a newly minted full professor, hired him to help with a book on the economics of the performing arts. The job turned into an invitation to stay with the Bowens for the summer — which blossomed into a lifelong closeness with the family, he said, "When I landed the job, how little I realized the wonders that lay ahead over the next half century."

Bowen's family provided the strong foundation to his accomplished career, Reveley said, particularly his wife, Mary Ellen, whom Bowen had known since the fourth grade.

"Mary Ellen was Bill's tower of strength, standing beside him, counseling him, sustaining him," he said. "Could Bill have developed as wonderfully as he did as a leader, indeed as a human being, without Mary Ellen? I don't think so."

Bowen always made time for his family and rarely missed family dinners, said his son David Bowen, referring to his mother as "truly Dad's best friend." For all his industriousness, Bowen also loved sports — especially tennis, in which David was a regular opponent — and had a distinct lack of pretension or desire for luxury, and a quirky sense of humor.

"Many of Dad's core traits visible in his public life were mirrored in his private life as well: his intellectual curiosity; his loyalty; his thoughtfulness; his generosity; his moral compass; his sense of humor; his ability to close the deal — particularly with his diabolical backhand and net game," David said. "Dad had a genuine passion for life."

Karen Bowen-Imhof, Bowen's daughter, ended the reflections by reading the poem "Ithaka" — the namesake of the organization ITHAKA — by Greek poet Constantine Cavafy, which her father first heard in Greece in 1981. The poem recounts a long and difficult journey that pays off not in the arrival at the destination, but by the time spent, wisdom gained and accomplishments made along the way.

"It captivated my father the moment he first heard it. It illuminated the importance of making the most out of life's journeys," Karen said. "Though I cannot recreate our time on a rickety old bus on a hot summer day so many years ago when my father first heard this poem, it seemed nevertheless appropriate to share it with all of you today as we look back in celebration upon his remarkable journey and all that he faced and achieved along the way."

2014 President's Commencement Address: 'Life's Journey and the Value of Learning'