Continuing a conversation that began over the summer with the launch of the Princeton Pre-read program, President Christopher L. Eisgruber sat down with about 20 undergraduates over lunch Friday at Forbes College to discuss Princeton professor Kwame Anthony Appiah's "The Honor Code: How Moral Revolutions Happen."

President Christopher L. Eisgruber and students residing in Forbes College met over lunch Sept. 27 for a discussion of "The Honor Code," the book all members of the Class of 2017 received over the summer as part of the Princeton Pre-read program. (Photo by Denise Applewhite, Office of Communications)

The students — mostly members of the Class of 2017 — came to Princeton from more than a dozen states and at least one other nation. They described interests in fields ranging from history to neuroscience to psychology.

The students received copies of "The Honor Code" over the summer, and discussions about the book have been taking place across campus this fall as part of the new Pre-read program. Appiah, the Laurance S. Rockefeller Professor of Philosophy and the University Center for Human Values, has published widely in philosophy and African and African American literary and cultural studies. 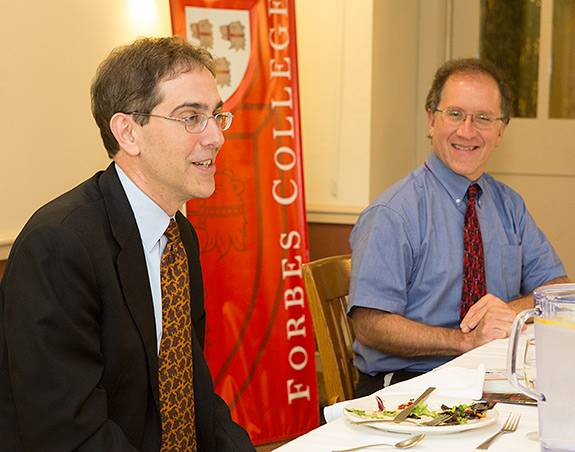 Eisgruber (left) and Forbes College Master Michael Hecht, a professor of chemistry, participated in the discussion. (Photo by Denise Applewhite, Office of Communications)

"[Appiah] describes how older conceptions of honorable behavior — like the idea that people should fight duels to avenge insults — suddenly die out, and he raises important questions about the meaning of honor in our own time," Eisgruber wrote to students this summer, describing the book.

Eisgruber encouraged the students to direct the conversation, and the discussion quickly shifted to Princeton's own Honor Code, which a group of students established in 1893 and remains a center of academic integrity on campus. One student asked: Does it matter that today's students are asked to adhere to a code that isn't of their own making?

"We all made the conscious choice to come to Princeton, whether our other choices were private or public, near home or far from home, we all had choices that probably didn't include an honor code," said freshman Kishan Bhatt.

Freshman Ethan Gordon noted that today's students have the opportunity to amend the code if they feel it is needed. "I think that we can still take ownership of this Honor Code even though we didn't create it," Gordon said. 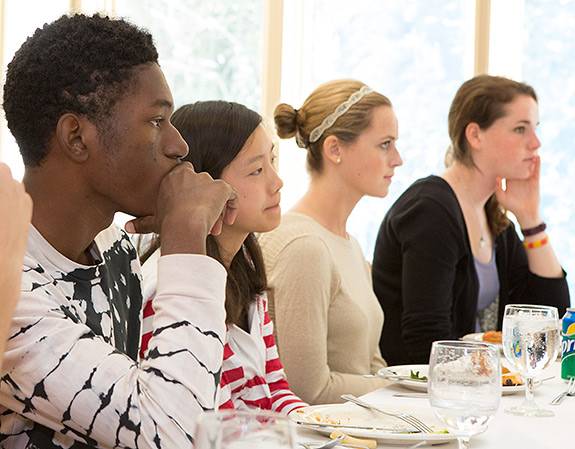 (From left) Sadiki Wiltshire, Alice Tao, Katharine Toll and Eliza Davis — all members of the Class of 2017 — were among the students who discussed "The Honor Code." (Photo by Denise Applewhite, Office of Communications)

Eisgruber, a constitutional scholar who previously led the University's Program in Law and Public Affairs, pointed to the U.S Constitution as another document that can evolve and remain relevant, even though today's citizens didn't have a hand in writing it. "We didn’t write it, but we can amend it," he said.

Eisgruber told the students that he also wanted to use the lunch as an introduction and he hoped they would be able to chat again — about the book or other topics — throughout their time on campus. So he worked to wean himself quickly off the name plates in front of each student. At one point, though, Eisgruber stumbled over the name of a student. She quickly assured him: "It's fine." "No, it's not fine," Eisgruber said. "I really want to learn names."

Even as lunch was cleared from the tables, students were continuing to debate issues of honor and morality raised by the book.

At the end of the discussion, Eisgruber and the students posed for a photo with the Forbes mascot, Malcolm. (Photo by Denise Applewhite, Office of Communications)