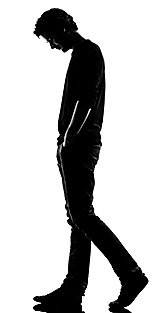 Researchers have found evidence that the emotional experience of guilt can be grounded in subjective bodily sensation. In other words, you may really feel guilt weighing on you.

Ever feel the weight of guilt?

Lots of people say they do. They're "carrying guilt" or "weighed down by guilt." Are these just expressions, or is there something more to these metaphors?

Princeton researcher Martin Day and Ramona Bobocel, an associate professor of psychology at the University of Waterloo, recently published the results of a series of studies that begin to offer answers to that question.

In an article titled "The Weight of a Guilty Conscience: Subjective Body Weight as an Embodiment of Guilt" in the journal PLOS ONE, Day and Bobocel find evidence that the emotional experience of guilt can be grounded in subjective bodily sensation.

Day, a postdoctoral research associate at the Woodrow Wilson School of Public and International Affairs, and Bobocel discuss their findings and how they can contribute to the broader understanding of how humans perceive guilt:

"Embodied cognition is an emerging field in psychology that examines how our thoughts and emotions interact with our bodies to guide behavior. Guilt is important because it plays a role in regulating our moral behavior. It can help us correct our mistakes and prevent future wrongdoing. Of course, people know that guilt feels unpleasant and is sometimes associated with feelings of tension and regret. However, we know less about the broad nature of guilt — such as how it interacts with the body and our beliefs about the body.

"People often say guilt is like a 'weight on one's conscience,' and we examined whether guilt is actually embodied as a sensation of weight. In a series of studies we asked students and members of the public to recall a time that they did something unethical. People recalled a variety of wrongdoings, such as lying, stealing or cheating. Afterward, in a separate task, we asked them to rate their subjective feeling of their own body weight as compared to their average. That is, did they feel less weight than usual, about the same weight, or more weight? We compared these responses to participants in control conditions who recalled an ethical memory, a memory of someone else's unethical actions or who were not asked to recall a memory.

"From an embodied cognition framework, we predicted that recalling personal unethical acts would imbue feelings of guilt that would be embodied as greater sensations of weight.

"Is this theoretical perspective correct? Did people actually report a sensation of more weight? We found that recalling personal unethical acts led participants to report increased subjective body weight as compared to recalling ethical acts, unethical acts of others or no recall. We also found that this increased sense of weight was related to participants' heightened feelings of guilt, and not other negative emotions, such as sadness or disgust. Although people sometimes associate importance with 'heaviness,' we found no evidence that importance could explain this finding. For example, ethical deeds were rated just as important as unethical actions, but only unethical, guilt-inducing memories led to increased reports of weight.

"In a final study we also explored a perceptual consequence of the weight of guilt. Using the same materials, we tested whether recall of unethical memories would affect perceived effort to complete a variety of helping behaviors as compared to a control condition. Importantly, some of these behaviors involved physical effort, such as carrying groceries upstairs for someone, whereas other behaviors did not, such as giving someone spare change. We found no differences between conditions for the perceived effort of the nonphysical actions. However, those who recalled unethical memories, which can be accompanied by sensations of weight, perceived the physical behaviors to involve even greater effort to complete compared to ratings provided by those in a control condition. This research demonstrates our initial investigation into the consequences of this phenomenon.

"Overall, it was exciting to find these patterns of results, which are consistent with an embodied theory of emotion. However, this is still relatively new research, and we are still exploring how to more fully characterize the experience of guilt. There are also very recent and complementary findings on this topic from independent research labs. For example, simulating the experience of the weight of guilt, such as with a heavy backpack, seems to be tied to regulating moral behavior. Such results are encouraging, and hopefully this emerging line of research will lead us to a more comprehensive understanding of the nature of guilt."