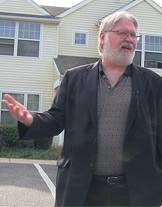 Princeton sociologist Douglas Massey, shown above in Mount Laurel, N.J., examined the impact of building this affordable-housing development in an upscale suburb of Philadelphia. The findings? The development had no negative impact on the surrounding area and brought significant life improvements to residents of the development.

Massey will lead a panel discussion on "Climbing Mount Laurel" at 4:30 p.m. Thursday, Nov. 7, in Dodds Auditorium, Robertson Hall. He will be joined by co-author David Kinsey, an urban, regional and environmental planner and a visiting lecturer in public and international affairs at the Wilson School; and Peter O'Connor, founder and executive director of Fair Share Housing. A public reception and book sale/signing of Massey's book will follow the discussion in Shultz Dining Room.

Douglas Massey first learned about the fight over a proposed affordable-housing development in Mount Laurel, N.J., when he was a graduate student at Princeton University in the mid-1970s.

Mount Laurel, a small town about 40 miles south of the Princeton campus, was in the midst of being transformed into a wealthy suburb of Philadelphia. Poor residents saw the proposed affordable-housing development as a way to ensure they could continue to live there as housing prices rose. Opponents feared the development would hurt property values, increase crime and lead to higher taxes.

The dispute led to landmark New Jersey Supreme Court decisions in 1975 and 1983 that cleared the way for what would become the Ethel Lawrence Homes, a townhome-style neighborhood of 140 units that opened its first phase in 2000. The development, built largely using federal tax credits and loans from the state of New Jersey, is owned and managed by the nonprofit group Fair Share Housing Development Inc.

So by the time Massey returned to New Jersey to join the University's faculty in 2003, the fight in Mount Laurel was over. But there were still no clear answers to the questions about the development's impact on its residents and the surrounding community.

Massey, the Henry G. Bryant Professor of Sociology and Public Affairs and director of the Office of Population Research, saw an opportunity to answer those questions. In this video, Massey tours the development and explains his work.

"I'm a social scientist, and I like to prove things," said Massey, whose research has focused on racial segregation, racial stratification and social stratification in the United States. "It's not good enough for me to just say it looks good or give a few anecdotes. I like to show beyond a shadow of a doubt, and that's what we did here."

Massey and his research team, which included graduate students, a postdoctoral fellow and an adjunct faculty member, began by comparing taxes, crime rates and property values in Mount Laurel with data on Cherry Hill, Cinnaminson and Evesham, nearby townships that didn't have affordable-housing developments. The result? "There was no difference between Mount Laurel and the neighboring townships," Massey said. "We can find no effect at all on taxes, on crime rates, on property values."

Similarly, Massey and his colleagues compared Ethel Lawrence residents with others who applied but were still on the waiting list for one of the development's units, which range from one to three bedrooms. Applicants must have incomes between 10 and 80 percent of the regional median income, between $7,230 and $57,888 annually for a three-person family in 2011.

"We found that people who moved into the Ethel Lawrence Homes had dramatic improvements in the quality of their neighborhoods, and a dramatic decline in exposure to negative life events, like muggings or break-ins," Massey said. "Their mental health improved. They ended up with much higher rates of employment and much higher earnings, a big drop in public assistance, and everybody was much better off."

The history of the fight for affordable housing in Mount Laurel and the results of the research are discussed in a new book, "Climbing Mount Laurel: The Struggle for Affordable Housing and Social Mobility in an American Suburb." The book's co-authors are Massey; Len Albright, an assistant professor of sociology and public policy at Northeastern University; Rebecca Casciano, founder of evaluation services firm Glass Frog; Elizabeth Derickson, an assistant dean for academic affairs at Swarthmore College; and David N. Kinsey, a visiting lecturer at the Woodrow Wilson School of Public and International Affairs. The book was published by Princeton University Press earlier this year.

Overall, Massey says, the Ethel Lawrence Homes offer a lesson in the power of affordable housing.

"I was attracted to this project here because it really provided a model for how to do things, not only to desegregate American society both in racial and class terms, not only to provide decent housing to people who didn't have access to it, but also to provide a program that promotes the social mobility of hard-working people who are just looking for a way to get ahead," he said. "If you give them half a chance they'll do it themselves."

Funding for the research was provided by the John D. and Catherine T. MacArthur Foundation and the U.S. Department of Housing and Urban Development.