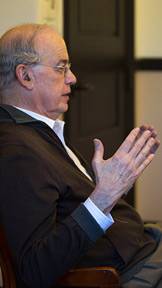 Harold T. Shapiro, president of the University emeritus and a professor of economics and public affairs, leads a freshman seminar that explores the frontiers of science, technology and public policy. The course examines topics such as human cloning, climate change and particle physics, focusing on the social issues raised by the scientific developments.

From a seminar room perched above Blair Arch, 15 Princeton University freshmen are spending their first semester on campus exploring the frontiers of science and technology through the lens of public policy.

Their guide through "Science, Technology and Public Policy" is Harold T. Shapiro, president of the University emeritus and a professor of economics and public affairs. Recognized for his efforts to promote public understanding of scientific issues, in 2012 Shapiro received the Public Welfare Medal from the National Academy of Sciences for his ability to "distill, debate and resolve the complex aspects of controversial scientific issues."

In the seminar, Shapiro brings important issues of the day to the table: human cloning, climate change, particle physics and more.

The goal isn't scientific expertise but an understanding of how these issues create broader questions for society.

"Hopefully, the class teaches students that these developments along the scientific frontier not only raise science problems, but also raise social issues that need to be resolved, sometimes by federal policy, sometimes by state policies, sometimes by individual decisions," Shapiro said. 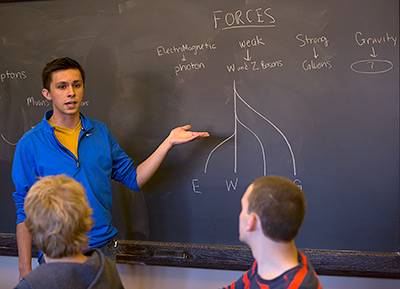 Freshman Joshua Burd discusses particle physics in the seminar "Science, Technology and Public Policy." Among the questions raised in the class: Does it matter if the United States isn’t a world leader in particle physics?

Jack Jankowski, who is from Wilton, Conn., said he was drawn to the course, designated the Brian W.H. Berghuis '81 Freshman Seminar, "because of the wide variety of fascinating topics covered in the course and because I wanted to experience a course in public policy."

"This course seemed like a wonderful option. Also, taking a class with Professor Shapiro seemed like a once-in-a-lifetime opportunity," said Jankowski, who is considering majoring in the Woodrow Wilson School of Public and International Affairs and attending medical school.

In class, Shapiro frequently moves the conversation forward with provocative questions: Should a fetus be able to inherit money? Should vaccines be compulsory? Does it matter if the United States isn't a world leader in particle physics?

Katie Hanss, who is from New York City and is considering majoring in chemistry, said Shapiro's questions compel students to think about issues in a more complex way and to revisit their initial views.

"A few weeks ago, Professor Shapiro posed the question: Should all performance-enhancing drugs just be legalized — wouldn't that truly level the playing field? My immediate reaction was absolutely not. To me, the basis of sports lies in fair competition between humans, and performance-enhancing drugs are an unnatural, unfair advantage," Hanss said.

"During the discussion, someone brought up the fact that there are already so many unnatural advantages — such as state-of-the-art training, advances in equipment, personalized diet plans — that athletes have over the average person," she said. "How are performance-enhancing drugs different? I won't lie, I'm not convinced, but my thoughts on the matter are up in the air. They very well might rearrange themselves upon landing." 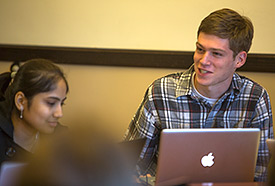 Freshmen Aastha Chokshi, left, and Jack Hollingsworth participate in the discussion. Students take turns introducing issues to be explored during each session.

Another class session early in the semester focused on assisted reproductive technologies, cloning and stem-cell research. Two students gave an overview of the issues — from the first in vitro fertilization attempts in the 1800s to the controversy over the idea of human cloning. Soon, the conversation moved around the room, with students offering facts and opinions drawn from class readings and personal experience.

"The seminar has an open environment that feels quite conducive to discussion and debate, and I've appreciated the process of exploring, refining, challenging and perhaps changing my and others' ideas," said Jonathan Liebman, who is from Williston, Vt., and is considering majoring in the Wilson School.

During the class, Shapiro stepped in at times to redirect the conversation or clarify a point. When discussion reached the movement to regulate human cloning, Shapiro called on his own experience as chairman from 1996 to 2001 of the National Bioethics Advisory Commission, a panel that made wide-ranging recommendations on bioethical issues surrounding human cloning and stem-cell research.

Here, too, Shapiro pushed the students to re-examine their own views. "If you just imagine that human cloning gets perfected, a stranger would have no way of distinguishing a cloned person from anyone else," he said. "So why is this so frightening?"

The conversation didn't end with the class session. Each week, the debate continues online through a discussion board Shapiro moderates. He often kicks off the interaction with a question and directs the conversation when needed as students explore the issues in more depth.

"What's been most interesting to see is that every week there are four to five conversation threads going that take each prompt in very different directions," Hanss said. For example, she noted that a discussion board on eugenics brought up "genetic testing policies, gene therapy policies and are we intelligent enough to participate in design? All the posts definitely make you think," Hanss said.

And that's the point of the course, Shapiro said.

"Even as freshmen, these students are advanced enough to have independent views on these issues," he said. "Those views may change over time, but they can start thinking through and participating in an intelligent conversation regarding the policy issues swirling around various parts of the science and technological frontier." 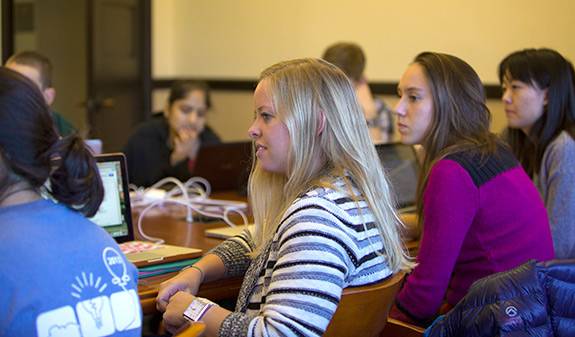 Students in the seminar are considering a range of majors, from chemistry to the Woodrow Wilson School of Public and International Affairs.