The public discussion at the Princeton Municipal Building on Witherspoon Street was intended to strengthen the relationship between the town and the University — an interest that Eisgruber expressed when he was named president earlier this year.

"This place is home to me. I am happy to be here both as president of the University and also as a citizen of this town," Eisgruber said, noting he has lived in Princeton longer than any other place in his life. "As a town and a University we produce together a community that has a depth and texture to it that makes it a very attractive place to live." 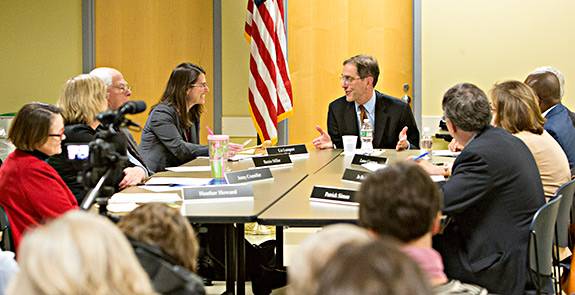 Princeton University President Christopher L. Eisgruber (center) and Princeton town officials engaged in a broad public conversation on Monday, Dec. 2. The meeting was intended to strengthen the relationship between the University and the town. (Photo by Denise Applewhite, Office of Communications)

It was an opportunity for Eisgruber, in his first year as president, and the Princeton Council, in its first year following the consolidation of the borough and township governments, to discuss areas of mutual interest.

"I see it as a welcome step in improving and building upon our town-gown relationship," Lempert said. "There are so many things that make us interdependent, and creating an environment for working on these issues in a productive and constructive way is in all of our best interest."

In advance of their conversation, Eisgruber shared with officials a summary of the many ways the University contributes to and engages with the community, including:

"We know that among the attractions of Princeton for faculty and staff, as well as for students, are the quality of life and diversity of this community, which we seek to support in multiple ways, including through the financial contribution that we have so dramatically increased over the past decade," Eisgruber wrote in his memo to the mayor and council.

Officials at the meeting discussed ways in which the University and town have worked well together, while also focusing on how to create a more constructive relationship, particularly on issues where there are disparate views.

Howard encouraged the group to consider the model of recent partnerships. She cited as examples the memorandum of understanding to improve coordination between the University Department of Public Safety and Princeton Police, as well as the University's work with local health officials during the meningitis B outbreak on campus.

Council members also learned more about Eisgruber's priorities as president, and how University initiatives may affect the greater Princeton community.

"What do you see as the next frontier that the University is going to engage in?" Miller asked.

Eisgruber said he is first looking forward to completing major building projects already underway, including expanding the University's capacities in the arts, neuroscience, and energy and the environment.

As for the future, he cited interests in broadening the University's international partnerships; further increasing the socioeconomic diversity of undergraduate students and the overall diversity of graduate students, faculty and senior staff; developing the next long-term campus plan; and considering a modest undergraduate expansion so more qualified students could benefit from the excellent teaching and research experience at Princeton.

"Diversity is important in our town as well and as we talk about areas where we have common interests … how might that look going forward as an area which we could work on together?" Butler said.

Eisgruber said he would welcome opportunities to work on promoting diversity within the University and town.

"We would have to figure out what the right ways are to do this," he said. "But this is something we consistently hear from our faculty and graduate students. They tell us they care about diversity of this community. It is a shared interest to all of us in the room."

In regard to the University's growth, Simon wondered how town and gown could "communicate more clearly and work together more effectively." Simon said discussions about the University's ongoing Arts and Transit Project became contentious, and he would like to improve the process for future projects.

"I do think that the arts project is a very good project and I am proud of it," Eisgruber said. "I am, on the other hand, regretful of the ruptures … that have been created by the public discussion around that project."

"We have found ways to work together on projects, including some that have proven very difficult in the past. I hope that we can continue to do that," he continued. "I think some of this involves recognizing that … there is a real and rare opportunity here and we need to seize that."

In closing, Liverman asked Eisgruber what his greatest wish is for the University and town.

Overall, Eisgruber said he hopes the two could work together to continue to make Princeton a wonderful place to live.

"Universities continue to grow because knowledge grows and because the community that depends on us grows in size and in its diversity," Eisgruber  said. "I would hope that we could find ways to meet those challenges and continue to grow in a way that allows us to sustain our aspirations in excellence and service, while also preserving and building upon that living tradition [in Princeton] of texture and depth. The combination of cultural activities, of diversity, of a sense of home and a sense of place that is here makes this a special location within New Jersey."