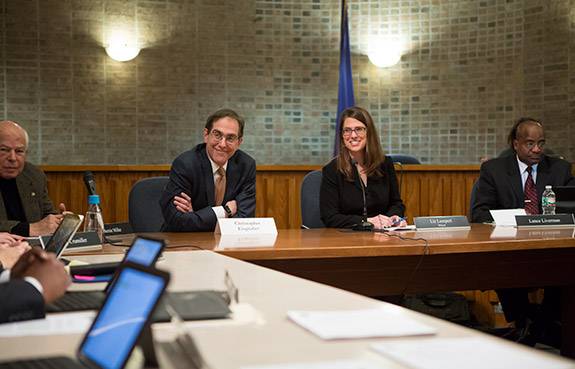 In his remarks Monday, Eisgruber highlighted the University's recently launched strategic planning process. The process is intended to balance the University's needs to expand its teaching and research facilities while remaining a natural and unimposing member of the community, Eisgruber said. In addition, Princeton adopted a campus planning process that will help identify options for campus development over a 10-year period beginning in 2016, in the context of a 30-year horizon. A forthcoming website for the strategic plan will include a forum for public comment.

The development of the strategic plan "includes our desire to be a good neighbor to, and member of, the community," Eisgruber said, touching upon a dominant issue of the discussion — the importance of open communication between town and University officials as both entities experience growth. Eisgruber stressed that the University and town council share a "mutual concern for the character" of Princeton, wanting to ensure that it is "not a sprawling place, but one that is compact enough to where people know one another."

"We should always be thinking as a town as well as a University about how we can do better," Eisgruber said. "We've both grown, we've both developed in ways that are synergistic … in ways that a great university and a great community are better than they were before."

Lempert said that recent "contentious issues" had highlighted the need for respectful and understanding dialog that acknowledges the wishes of both the University and town. She cited the message of His Holiness the 14th Dalai Lama during his Oct. 28 appearance on campus that compassion and empathy are essential for building better relationships. "It's useful to have these discussions to strengthen the relationship between our institutions," Lempert said. "Princeton may have started as a two-building college in a small town, but now it's a world-class university with growth needs."

Council member Simon asked Eisgruber about the role the council could have in University planning and expansion. Eisgruber reiterated that "the channels of communication need to be open and as issues arise, we need to identify them and identify them early."

Eisgruber said he regretted the "ruptures in relations" that had occurred recently, particularly regarding the construction of the new Princeton train station, which is scheduled to open Nov. 17.

Council member Crumiller, who believes relocating the station 460 feet farther from downtown Princeton may affect walkability and ridership, asked Eisgruber if he thought the new station is an improvement. Speaking broadly on the station as part of the University's larger Arts and Transit Project, Eisgruber responded, in reference to the planned restaurants and arts center, "I am looking forward as someone who is a user of that area to the changes that have been made." Council member Miller added that the new station is an opportunity for the University and council to cooperate by encouraging people of the town and campus community to use the new facility. 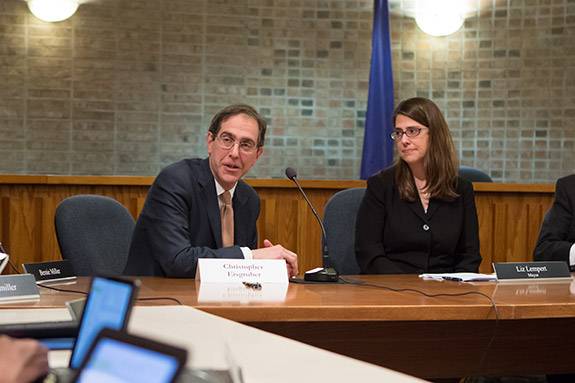 A major topic of discussion was how the University and town can work together to ensure that both develop in a mutually beneficial manner. "The key is that we need to be thoughtful," Eisgruber told members of the council and public. (Photo by Denise Applewhite, Office of Communications)

Other topics of discussion were as follows:

• Characterizing Princeton students as constituents, Crumiller discussed the possibility of Princeton students taking part in the council, perhaps with a student-body representative. Council member Howard noted that students already take part in public-health meetings and proved especially helpful in keeping track of the meningitis outbreak last year. Eisgruber responded that the matter is one for the council and student government to decide, but that the idea is mutually beneficial.

• Howard asked Eisgruber about issues related to public safety, particularly sexual assaults, which is a key issue on many campuses. Eisgruber cited the University's recent formation of a panel to refine procedures for investigating assaults, and the encouragement of students to behave respectfully toward, and help protect, one another.

• Butler, inspired by a Sunday, Nov. 2, New York Times op-ed calling on university presidents to tackle climate change directly, asked what Princeton is doing. Eisgruber responded that the University has set "demanding goals" for itself related to reducing carbon emissions and other measures. More importantly, he said, "The most important thing we can do as a university is provide reliable and credible information about climate change and what it's doing."

In advance of the meeting, Eisgruber shared with town officials a summary of the many ways the University contributes to and engages with the community.