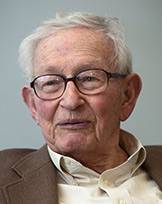 Princeton University's Philip Anderson, who was awarded a Nobel Prize in physics in 1977, celebrated his 90th birthday with 150 of his colleagues and associates at a workshop in honor of his many contributions to the field of condensed matter physics, which deals with understanding the properties of solids such as semiconductors and superconductors. Anderson received the Nobel Prize for theoretical investigations of the electronic structure of magnetic and disordered systems.

Noted Princeton University physicist Philip Anderson celebrated his 90th birthday at a weekend workshop devoted to an illustrious career that included a Nobel Prize and contributions to understanding the fundamental nature of materials — from everyday items such as magnets to exotic superconductors and new forms of matter.

The workshop to honor Anderson, the Joseph Henry Professor of Physics, Emeritus, and a senior physicist, was held Dec. 14 and 15 at the Frick Chemistry Laboratory on campus. About 150 colleagues and former students from as far away as India and Japan attended, as well as five fellow Nobel Prize winners and one Fields Medal recipient. The gathering was organized by N. Phuan Ong, the Eugene Higgins Professor of Physics at Princeton, and Piers Coleman, professor of physics at Rutgers University.

"Phil Anderson has made tremendous contributions to the field of condensed matter physics," said Shivaji Sondhi, professor of physics at Princeton and a member of the advisory committee. Condensed matter physics, also called solid-state physics, describes the properties of solids, such as the semiconductors used in today's electronic devices.

During the workshop, Anderson frequently commented on the presentations or asked questions of the speakers. Still active in research today, Anderson is known for developing the concept that new behaviors of materials can emerge from collections of individual particles, a perspective put forth in a 1972 article in the journal Science titled, "More Is Different." For example, an individual copper atom has little electrical activity, but millions of copper atoms in a wire can conduct electricity. 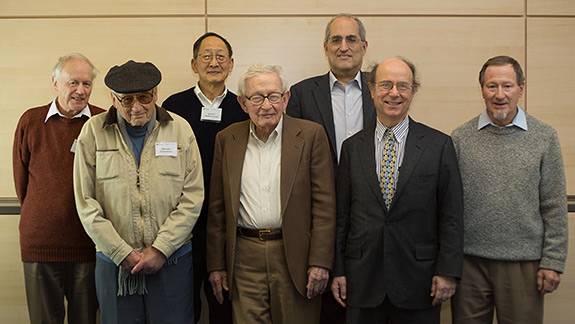 "Phil has totally revolutionized the way the world looks at the physics of matter, and made it clear that there are new properties that emerge when you put matter together," said Coleman, who earned his Ph.D. with Anderson at Princeton in 1984.

Born in Indiana and raised in Illinois, Anderson entered Harvard University as an undergraduate in 1940 and earned his Ph.D. at Harvard in 1949 under the guidance of John Hasbrouck van Vleck. Upon graduation, he joined Bell Telephone Laboratories in Murray Hill, N.J., where he contributed to understanding both ordinary ferromagnetism and antiferromagnetism, a behavior whereby magnetic atoms orient in opposite directions and cancel each other out.

During this period, Anderson conducted research that would later lead to the 1977 Nobel Prize in physics with van Vleck and Sir Nevill Francis Mott of Cambridge University. The prize was given for "fundamental theoretical investigations of the electronic structure of magnetic and disordered systems." Anderson's Nobel-winning work centered on how electrons move in disordered metals. His concept of how electrons behave when trapped, or localized, became known as Anderson localization.

In 1962, Anderson published a now-famous paper on how the photon acquires mass. Anderson's theory was cited two years later by Peter Higgs in his paper on the discovery of a mechanism for understanding the origin of mass, a theory for which Higgs and François Englert won the 2013 Nobel Prize in physics. The mechanism, which was confirmed by the discovery of the Higgs particle at the Large Hadron Collider in Switzerland, is sometimes referred to as the Higgs-Anderson mechanism.

During the 1960s and '70s, Anderson explored the theoretical basis for superconductivity, which is the conduction of electricity without resistance at temperatures near absolute zero. He also explored the strange properties of helium-3, a rare form of helium with one instead of two neutrons in its nucleus.

"I would often talk with Phil when I was at Bell Labs, and he was always very helpful to me," said Douglas Osheroff, a professor emeritus in physics at Stanford University who, with two colleagues, earned the 1996 Nobel Prize in physics for the discovery of superfluidity, or resistance-less flow, in helium-3.

In 1967, Anderson began dividing his time between Bell Labs and a faculty position at the University of Cambridge in England.

He returned to the U.S. in 1975 to take a half-time faculty position in the Department of Physics at Princeton. There, Anderson revisited his localization theory and developed precise predictions about how electrons behave in disordered materials. The work led to a 1979 paper in Physical Review Letters that became known as the Gang of Four paper in reference to Anderson and colleagues Elihu Abrahams, T.V. Ramakrishnan and Don Licciardello. During this period, he also worked on theories of materials called spin glasses, which are nonmagnetic metals embedded with randomly spaced magnetic elements.

Anderson retired from Bell Labs in 1984 to become a full-time professor at Princeton. He continued his research on spin glasses and developed a theory of the behavior of high-temperature superconductors, which operate at higher — but still frigid — temperatures than traditional superconductors. His "Resonating Valence Bond" theory of high-temperature superconductivity has engendered controversy but also stimulated much discussion. He became an emeritus professor in 1996.

"There are very few people in condensed matter physics who have not been influenced by Phil's ideas," said Anthony Leggett, a professor of physics at the University of Illinois at Urbana-Champaign who received the 2003 Nobel Prize in physics for additional insights on superfluid helium-3. "Even when he turned out to be wrong, he was influential because he got people to think in new directions."

Anderson's theoretical work extended to fields beyond condensed matter physics, said Edward Witten, the Charles Simonyi Professor of Mathematical Physics at the Institute for Advanced Study in Princeton and winner of the 1990 Fields Medal. "Phil was one of the inventors of the close analogy between condensed matter physics and relativistic particle physics," Witten said.

"Anderson's work illustrates his own famous epigram 'More is different,'" said Frank Wilczek, the Herman Feshbach Professor of Physics at the Massachusetts Institute of Technology and recipient of the Nobel Prize in physics in 2004. "It is a collection of creative approaches and solutions to specific problems so large and impressive that it takes on a life of its own, expressing a scientific philosophy and personality — not only a series of revelations, but an inspiration. The more you know about modern science, the more amazed you are that one person could accomplish so much."

"The conference was an illustration of the breath of Phil's influence on several generations of condensed matter physics and on physics more broadly," said William Brinkman, a senior physicist at Princeton, former head of research at Bell Labs and until recently director of the U.S. Department of Energy's Office of Science. "His devotion to physics research made him unique and the extent to which he continues to think about problems is remarkable."

Many of the conference attendees were former students who earned their Ph.D. theses with Anderson as their advisers. Clare Yu, a professor of physics at the University of California-Irvine, began working with Anderson on her undergraduate senior thesis. After graduation in 1979, she stayed on at Princeton to complete her Ph.D. in 1984.

"Phil is the most honest person I know," Yu said. "He is the sort of person who will always give you straight answers to your questions. It is a testimony to him that so many of his students came to this workshop."

Anderson received the National Medal of Science in 1982 and has honorary degrees from several institutions. He has served in leadership positions at the American Physical Society and was deeply involved with the formation of the interdisciplinary Santa Fe Institute, which is dedicated to exploring the science of complexity. Anderson's research files and other papers are held in Princeton University Library's Department of Rare Books and Special Collections.

Of the event and its attendance, Anderson said, "It is just wonderful that so many people from my past are here."