Philip Warren Anderson, one of the greatest theoretical physicists of the postwar era, died Sunday, March 29, at Princeton Windrows, age 96. Anderson was the Joseph Henry Professor of Physics, Emeritus, at Princeton University. His illustrious career included a Nobel Prize and fundamental contributions to understanding the nature of materials and collective phenomena more generally — from everyday items such as magnets to exotic superconductors and new forms of matter such as topologically ordered states. He also contributed to the Anderson-Higgs mechanism, which is a key basis for the Standard Model of Particle Physics. 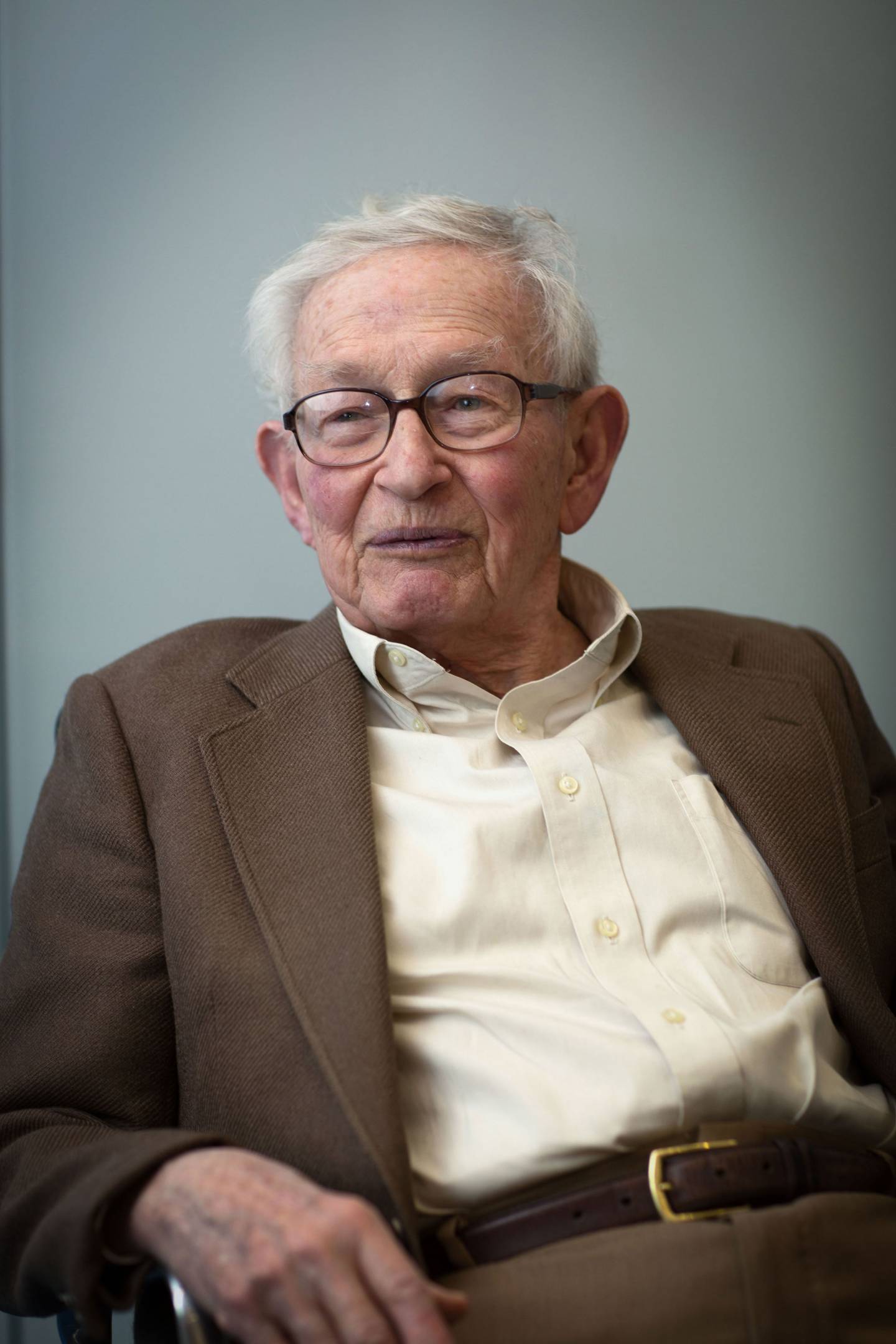 Philip Anderson was born on Dec. 13, 1923, in Indianapolis, Indiana, and grew up in Urbana, Illinois, where his father was a member of the faculty of the University of Illinois. He entered Harvard University for his undergraduate work and, after a short wartime stint at the U.S. Naval Research Laboratory to build antennas, earned his Ph.D. at Harvard in 1949 under the guidance of John Hasbrouck van Vleck. Upon graduation, he joined Bell Telephone Laboratories in Murray Hill, New Jersey, where he contributed to the understanding of ferromagnetism and antiferromagnetism and thereby to the emerging understanding of spontaneously broken symmetries across physics.

During this period, Anderson conducted research on the electronic structure of magnetic and disordered systems, which influenced the development of electronic switching and memory devices in computers. This work would later earn him the 1977 Nobel Prize in Physics, shared with van Vleck and Sir Nevill Francis Mott. Anderson’s concept of how extended electron states can be localized by the presence of disorder in a system became known as Anderson localization and became a central inspirational paradigm in the field.

In another famous paper written in 1962, Anderson showed how the photon acquires mass inside a superconductor. Anderson’s theory preceded the Nobel Prize winning work of Peter Higgs and Francois Englert on the mechanism for understanding the origin of mass in what later became the Standard Model of particle physics.

In 1967, Anderson began dividing his time between Bell Labs and a faculty position at the University of Cambridge in England. During this time, he explored the theoretical basis for superconductivity and the strange properties of helium-3. He returned to the U.S. in 1975 to take a half-time faculty position in the Department of Physics at Princeton. There he revisited his localization theory and was one of the “Gang of Four” (with Elihu Abrahams, T.V. Ramakrishnan and Don Licciardello) and developed a scaling theory which made it into a quantitative experimental science with precise predictions. During this time, he also worked on theories of materials called spin glasses where he again introduced, with Sir Sam Edwards, a set of ideas that remain fruitful today.

Anderson retired from Bell Labs in 1984 to become a full-time professor at Princeton. He continued his research on spin glasses and developed a theory of the behavior of high-temperature superconductors, which operate at higher temperatures than traditional superconductors. His “Resonating Valence Bond” theory of high-temperature superconductivity stimulated much debate and led to the field of “spin liquids,” which is at the root of a flourishing field of topological matter. He became an emeritus professor in 1996 but continued to be a regular presence in the department until very recently.

During his long career, Anderson advised many successful condensed matter physicists, including F. Duncan Haldane, winner of the 2016 Nobel Prize in Physics, and he inspired countless others, including Brian Josephson, winner of the 1973 Nobel Prize, who took a class from him in his Cambridge days. 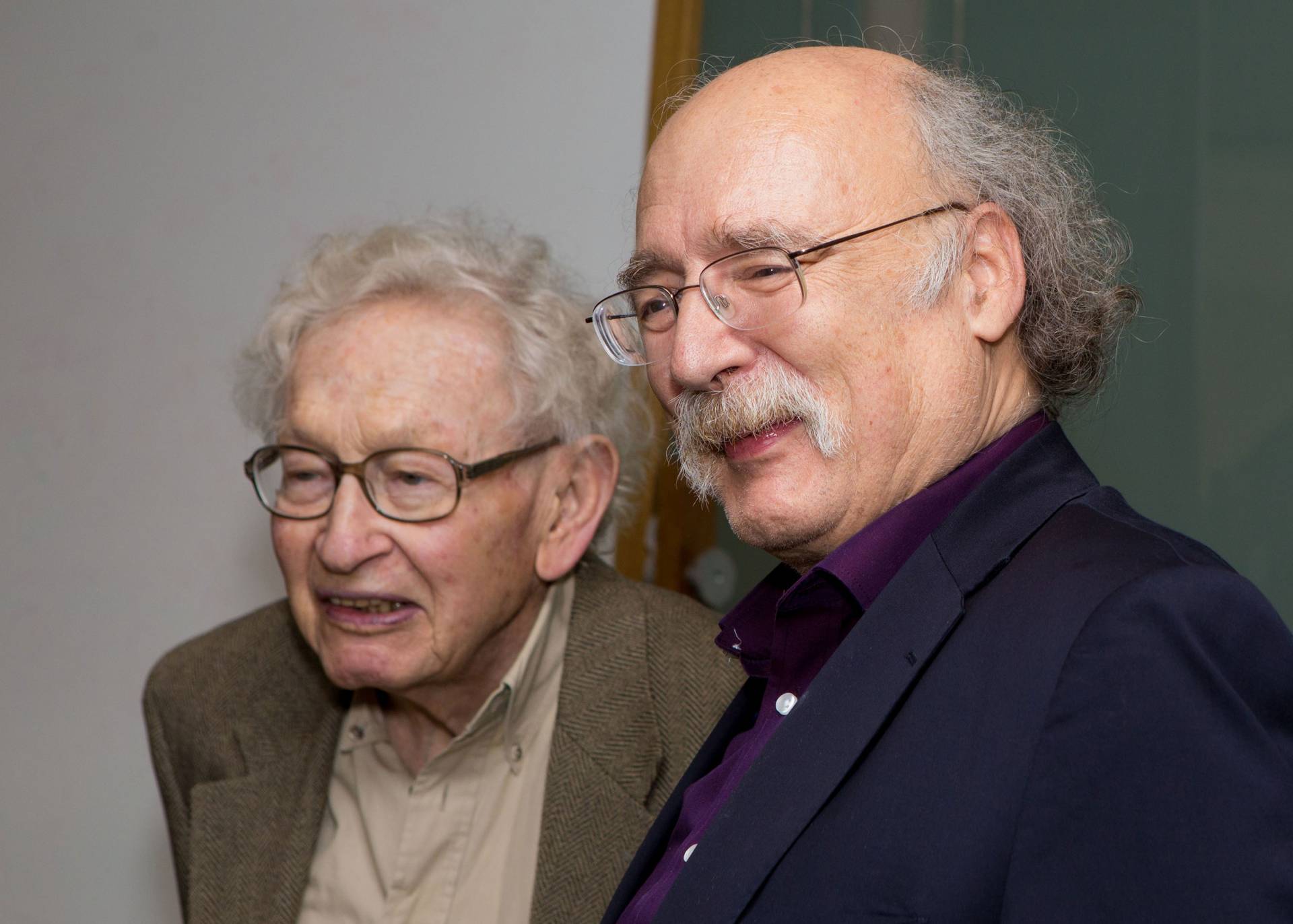 “Phil Anderson was a giant in the field of "condensed matter" physics, with an intuitive and often contrarian way of seeing the essential features of a problem from a new angle, which has often changed our way of thinking about it,” said Haldane, the Sherman Fairchild University Professor of Physics. “I had the great fortune to have had him as my mentor when I was a graduate student.  I would regularly meet him to talk about the problem he had given me to work on, but instead he would tell me about the things he was thinking about that day, and seeing his thought process was an amazing lesson in how to think about problems that decisively shaped my future career.  What a mentor!”

Anderson is also known for contributions to the philosophy of science through his elucidation of the concept of emergent phenomena. In his famous 1972 article "More is Different," he emphasized that complex systems may exhibit behavior that cannot be understood only in terms of laws governing their microscopic constituents, but may require hierarchical levels of science each with their own fundamental principles.

“Phil Anderson will always be known as the person that started solid state physics as a field,” said Bogdan Andrei Bernevig, professor of physics. “He was a complex person, a Renaissance man, and I was always in awe of his intellect. He was working on theories for regular days well into his ’90s. Seeing him come to my office — during my times as a postdoctoral researcher and assistant professor — to explain his latest theory, to guide me on what he thought were the most important directions in the field and to listen to my research, was one of the most humbling and exciting experiences of my life. It is probably the equivalent of a young writer having a conversation with Tolstoy or Hemingway.”

“Phil was one of the true giants of theoretical physics,” said Herman Verlinde, the Class of 1909 Professor of Physics and chair of the physics department. “He was a uniquely creative scientist. His many contributions and ideas inspired several generations of physicists and continue to do so up to this day. He came in to the department almost every day until very recently and we will really miss him.”

Nai Phuan Ong, the Eugene Higgins Professor of Physics, recalled that Anderson called himself “a curmudgeon,” when in reality he was “at heart a warm and amazingly loyal friend to all his collaborators.”

Added Ong: “Numerous former students and postdocs who found difficulties in their career path after leaving his group often returned to Princeton to work with him until they found their footing. In one instance, when a collaborator suffered a serious stroke, Phil caught the next flight and flew to stay with him for a week. Over the years I have enjoyed many lunches with him. The topics, if not on superconductivity, spanned the full spectrum of intellectual pursuits.”

Anderson received the National Medal of Science in 1982. He was deeply involved with the formation of the Santa Fe Institute, an interdisciplinary center dedicated to exploring the science of complexity. Anderson’s research papers are held in Princeton University Library’s Department of Rare Books and Special Collections. He was a certified first-degree master of the Chinese board game Go, a game he continued playing until late in his life.

“Being Phil's colleague for the past quarter century — when he was already a legend — was an honor in itself,” said Professor of Physics Shivaji Sondhi. “My experience of him was of a man of wide learning well beyond physics, broad interests across science, enormous creativity and an extraordinary capacity — almost literally to the very end — to get up and think about important problems in physics. I find it hard to imagine Jadwin Hall without him.”

Anderson is survived by his wife, Joyce, and daughter, Susan.

Contributions in his memory may be made to the Santa Fe Institute and the Climate Science Legal Defense Fund.

View or share comments on a blog intended to honor Anderson’s life and legacy.