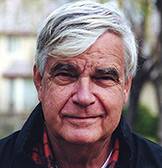 Fred Hargadon, who admitted a generation of students to Princeton University as dean of admission from 1988 to 2003, died at his home in Princeton on Wednesday night. He was 80.

Hargadon, who was once called "the dean of deans" by The New York Times, was a national leader in the field of college admissions. At Princeton, he was known for the personal attention he paid to each applicant and for his active engagement in the life of the campus. His acceptance letters were legendary for beginning with the single word "YES!" — a phrase now carved in stone in front of Hargadon Hall, the Whitman College dormitory named in his honor.

"Fred Hargadon was a legendary figure in the lives of thousands of Princetonians who will never forget the life-changing moment when they received his famed 'YES!' letter," Princeton President Christopher L. Eisgruber said. "Fred's standing as a national leader in the field of college admissions was well deserved. Princeton benefited greatly from the attention and care he paid to each application in shaping extraordinary classes for 15 years, and Fred built lasting relationships with those students through his enthusiastic engagement in campus life. I am happy that the beautiful Hargadon Hall stands as a testament to his tremendous impact on this University."

Hargadon spent more than 35 years working in college admissions. He worked to make the admission process fair and equitable, and to demystify the often-stressful experience for students and parents. While Hargadon was at Princeton, the undergraduate student body became more diverse and the University adopted its landmark 2001 no-loan financial aid policy.

"Dean Fred," as students called him, was appreciated on campus for his wisdom, wit and energy.

"Fred Hargadon came to Princeton in 1988 as the dean of all admission deans, a reputation he enhanced significantly during 15 years of outstanding leadership at Princeton," said former Dean of the College Nancy Malkiel, who led the search committee that recommended Hargadon and to whom Hargadon reported.

Malkiel continued: "From the Class of 1993 to the Class of 2007, he received — and read — some 207,900 applications, and he sent his signature 'YES!' letters to 17,400 lucky admits. When students matriculated at Princeton, he quickly demonstrated that he knew them personally and cared about them as individuals. He taught them to take the best advantage of their opportunities at Princeton, to treat their fellow students with respect and kindness, to believe in themselves and be confident about their abilities, to be humble, and to understand the difference between what was temporarily annoying and what was profoundly important." 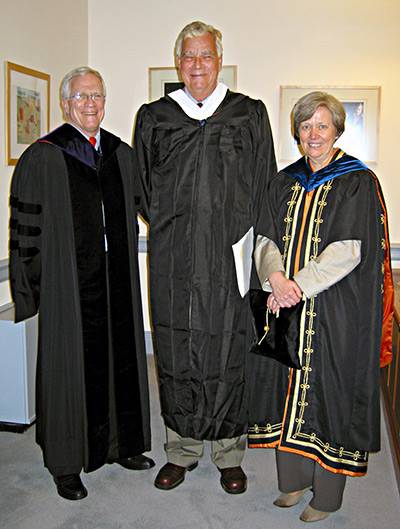 Fred Hargadon (center) posed for a photo with Robert Rawson Jr., chair of the Board of Trustees executive committee, and Princeton President Shirley M. Tilghman before Hargadon gave the Baccalaureate address on June 1, 2003. (Photo courtesy of the Office of Communications)

Before his retirement, Hargadon was selected to deliver the Baccalaureate address to the graduating Class of 2003.

"By no means is [a Princeton diploma] meant to certify that you are now a completely educated person," Hargadon told seniors at the time. "Rather you should consider it as hard-earned evidence that Princeton now believes that you will be well prepared to continue to educate yourselves for decades to come."

Even after Hargadon left his position, he remained part of the University community.

"He always had an enormous connection with the students, both the ones he admitted and the ones that followed," said his son Andy Hargadon. "He was interested in their growth and development over the years. You could always count on him to be at some sporting or cultural event on campus each weekend."

Prior to coming to Princeton, Hargadon was a senior officer at the College Board. He served as dean of admission at Stanford University from 1969 to 1984, and held the same position at Swarthmore College from 1964 to 1969.

His enthusiasm for and knowledge of college admissions made Hargadon a leader in the field. On his appointment to Princeton in 1988, he called admission "one of the most interesting jobs in a university." A 1984 New York Times profile noted his license plate was simply "ADMITS."

Hargadon spoke and wrote frequently on the subject of admission, including an essay in the 1989 issue of the Princeton Alumni Weekly that said: "One would gather from the mail we get each year that many people view the admission process either as totally mysterious or as easy and evident. In fact, it is neither. Instead, it is complicated and complex, and if it is to be done well, enormously time-consuming."

Lisa Dunkley, a 1983 alumna who worked in the Office of Admission from 1988 to 1994, said Hargadon's approach to admission was "all about the applicant."

"Fred's approach seemed right to me: Our responsibility was to pay very sharp attention to all details and to make the playing field as even as possible for everyone, from the child of itinerant migrant farm workers to the offspring of royalty, both real and conferred," said Dunkley, who now works in the Office of Development. "Our job was to render a reasoned opinion about how well each student took advantage of whatever resources were at his or her disposal."

Born in 1934 in Ardmore, Pa., Hargadon had a somewhat unconventional route to college admissions. He was among the first members of his family to go to college. After high school, he worked briefly for the Atlantic Refining Co. and the post office before serving in the Army for two years. He later graduated from Haverford College, and did postgraduate work at Harvard University and Cornell University. He began his career on the political science faculty at Swarthmore.

"For his colleagues, Fred was a source of great wisdom, not only about college admissions, but about the widest range of matters of educational policy," Malkiel said. "He was a towering presence both in physical stature and in the friendship and counsel he gave so generously."

A campus memorial service is being planned for the spring. Donations in Hargadon's memory may be made to Princeton or Stanford universities.

Wisdom and cheers for new undergrads