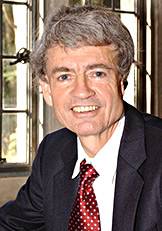 Michael Cook, the Class of 1943 University Professor of Near Eastern Studies, has been awarded the Holberg Prize, a major international honor established by the Norwegian parliament to recognize outstanding scholarly work in the arts and humanities, social sciences, law or theology.

Cook, who joined the Princeton faculty in 1986, is a highly regarded Islamicist who has made major contributions to the intellectual history of the medieval Islamic world. His works on Muhammad and early Islamic theology have become classics.

In its announcement of the prize, the Holberg Committee cited Cook as "one of today's leading experts on the history and religious thought of Islam. ... His contribution to the entire field, from Islam's genesis to the present, displays a mastery of textual, economic and social approaches."

In learning of the honor, Cook said: "It's thrilling and at the same time intimidating. One thing I know for sure is that if I hadn't come to Princeton all those years ago this never would have happened to me."

In 2001, Cook won the Middle East Studies Association Albert Hourani Book Prize for "Commanding Right and Forbidding Wrong in Islamic Thought." The "New Cambridge History of Islam," for which Cook was the general editor, won the 2011 American Historical Association Waldo G. Leland Prize. Cook's 2003 book, "A Brief History of the Human Race," examines the last 10,000 years and explains why and how history has unfolded the way it has.

In describing Cook's work, Sükrü Hanioglu, the Garrett Professor in Foreign Affairs and chair of the Department of Near Eastern Studies, said Cook "has dealt with issues ranging from Ottoman socioeconomic history to the roots of Muslim faith, and from Islamic intellectual history to human civilization. I cannot think of any other scholar who could grapple with such a broad range of subjects."

In 2006, Cook received the University's Howard T. Behrman Award for Distinguished Achievement in the Humanities. He has received the Andrew Mellon Foundation's Distinguished Achievement Award and the Farabi International Award in the Humanities and Islamic Studies. He is a fellow of the American Academy of Arts and Sciences, a member of the American Philosophical Society and a corresponding fellow of the British Academy.

Cook is also known as an excellent teacher who teaches undergraduate and graduate courses on the early centuries of Islamic history and on world history. In 2007, he received the University's Graduate Mentoring Award by the McGraw Center for Teaching and Learning.