A robotic insect that waves hello, a calculator controlled by a few pokes in midair, an alarm clock that sprays water and posts embarrassing social media statuses — not ordinary products of a college student's weekend. But this was no ordinary weekend — it was HackPrinceton.

For 36 hours ending Sunday afternoon, March 30, Jadwin Gym on the Princeton University campus was packed with some 500 undergraduates from more than 40 universities, working furiously on programming and hardware projects. Such "hackathons" have grown in popularity in recent years. Usually 24- or 36-hour events, they provide the students with food, camaraderie and a location to devote a weekend to develop an idea — whether an extension of their senior theses, a pitch for a startup company, or a computer game. 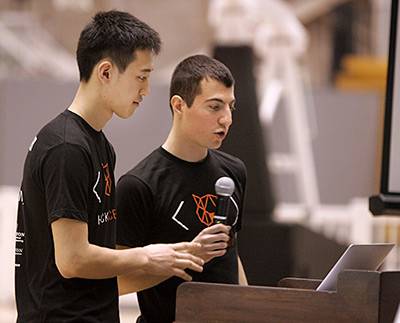 HackPrinceton, a weekend-long event held in Jadwin Gym March 28-30, brought some 500 college students to campus to build hardware and software tools and toys. The event was organized by Princeton undergraduates Hansen Qian (left) and Adam Yabroudi (right) with a committee of student volunteers. (Photo by Frank Wojciechowski for the Office of Engineering Communications)

At the end of the Princeton event, a panel of judges including experienced technologists in business and academia decided on the best projects. The winners were awarded prize money and goodies, so-called "swag," from sponsors such as Google and Facebook.

The students came from all around the East Coast and beyond. Yi Qin and Jian Zhang of Purdue University drove 13 hours, picking up teammate Paul Wong from the University of Pittsburgh.

"We just really wanted to build something cool," Qin said. The three developed SmartCar, an inexpensive accident-avoidance system for older cars that combines turn-by-turn navigation with tools that issue a warning if a driver leaves a lane or risks a collision.

The hackathon opened Friday evening with a talk by Jon Steinberg, the president of Buzzfeed and 1999 Princeton alumnus, and continued with a fair of products from corporate sponsors who made their technologies available for teams to use throughout the weekend. On Saturday, Stephen Wolfram, creator of online computation engine Wolfram Alpha and computation software Mathematica, pitched his new product for hackers to test and offered insights into his own success. 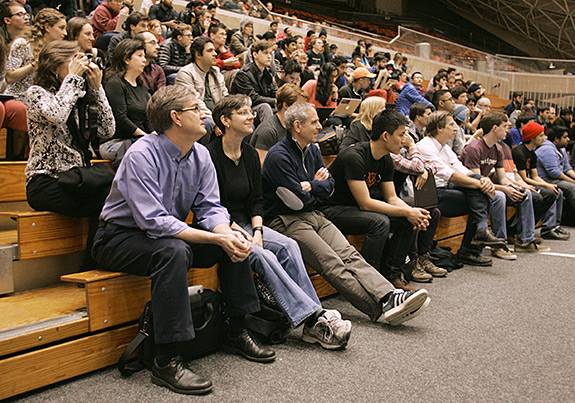 Professor Edward Felten (at left in blue), director of Princeton's Center for Information Technology Policy, attended the closing ceremonies and delivered a talk on electronic currencies such as Bitcoin. (Photo by Frank Wojciechowski for the Office of Engineering Communications)

At the closing ceremony, which was open to the public, 20 finalists presented rapid-fire pitches before a large audience. Also, Edward Felten, the Robert Kahn Professor of Computer Science and Public Affairs and director of Princeton's Center for Information Technology Policy, gave a talk about the methods and challenges of developing digital currencies such as Bitcoin.

Most of the rest of the hours were a marathon of intense coding, wiring and soldering.

But it was not all work. As a break, tired students could face off against Olympian Ariel Hsing, a Princeton freshman, at Ping Pong, or challenge "Jeopardy" champion and Princeton sophomore Terry O'Shea. Throughout the weekend, a-capella groups including the Roaring 20 and Wildcats performed, and participants could rock climb or take part in a banana-eating contest.

Organized by Adam Yabroudi, a junior in electrical engineering, and Hansen Qian, a sophomore in computer science, HackPrinceton has grown rapidly since last spring when it had 150 participants. A new part of the event this semester was its system of mentors – a mix of scientists and engineers at the University and businesses as well as local alumni —  which  won particular praise. "A lot of times people are afraid of hackathons," said Qian. "We wanted to combat that. The mentors were really helpful, the students were enthusiastic, and everyone seemed to enjoy it." 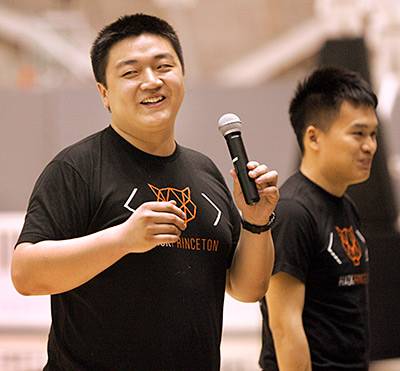 Paul Wong (speaking), of the University of Pittsburgh, teamed up with Yi Qin (right) and Jian Zhang (not shown) of Purdue University, to create SmartCar, a device to improve safety in older cars not already equipped with modern accident-avoidance technology. (Photo by Frank Wojciechowski for the Office of Engineering Communications)

Chen Ye, a freshman from Brown University whose team won first place in the hardware category, noted that HackPrinceton was one of the best he had attended this academic year. Ye and classmate Nate Parrott created AirBike, an innovative system of bike sharing based on a mixture of software and hardware that allows bikes to be locked and unlocked via mobile devices.

"I just love the atmosphere here — the ability to be able to connect with all these different people and to develop your skills in a nonacademic, exploratory setting," said Ye. He said he particularly appreciated the opportunity to try a hardware project, which is not emphasized as much in other hackathons. The Department of Electrical Engineering opened its student teaching lab to facilitate hardware projects.

The 35 hardware projects were a considerable increase from the 20 of the fall session and three at last spring's event — enough to form a sizeable group of competitors in the field. In the end, second place in the category went to a robotic insect, dubbed Twitchy the Hexapod, built by Princeton computer science seniors Harvest Zhang and Bonnie Eisenman. The robot could walk, turn and even wave hello to the audience.

"HackPrinceton is really special to me because of its hardware track," said Eisenman, who was attending HackPrinceton for the third time and has participated in other hackathons. "As a computer science major, I don't usually get to work on hardware projects, so it's fun to spend a weekend working on something entirely random, and put my skills to use for purely creative purposes."

Third place in hardware was awarded to Cryptocard, the senior thesis work of computer science major Lawrence Diao and economics majors Joe Goss and Eric Rehe, which exposed the vulnerability of credit card fraud and devised a system of encryption.

In the software category, Derrick Dominic, a Princeton junior majoring in electrical engineering, won first prize with his project, named Echocast.  Using high-frequency sound that the human ear cannot detect, Dominic demonstrated how he could transmit data to his phone, which was on airplane mode, meaning it could not receive the data through WiFi, Bluetooth or other conventional wireless technologies.

Second and third place in software went to Moving Math and Alpha Latex, respectively. Moving Math, created by computer science seniors Chhaya Werner, Natalie Weires and Wenley Tong, is an interactive educational program that allows users to visualize simple computations such as addition and multiplication by swiping and poking in the air. Amiel Kollek of McGill University developed Alpha Latex, which integrates the vast web of knowledge provided by Wolfram Alpha with the typesetting software Latex. 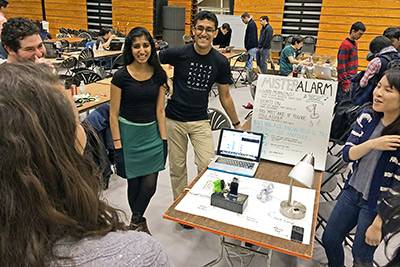 A team from Carnegie Mellon University created an alarm clock that mists water onto a sleeper if not shut off in time. For deep sleepers, the device escalates to posting embarrassing status updates on social media and finally blasts a car horn if the person doesn't wake up and shut it off. (Photo by Steven Schultz, Office of Engineering Communications)

The judges also gave out smaller awards for categories such as "most adorable" and "social entrepreneurship." Qin, Zhang and Wong, the team who drove from Purdue and Pittsburgh, won "Best Mashery Hack." They also were selected as one of the 20 finalists.

A team of freshmen from Carnegie Mellon University developed the MisterAlarm, aimed at waking even the sleepiest person. It first turns on a desk light, then sprays a fine mist of water on the sleeper. If these don't work, it escalates. It posts embarrassing status updates to the sleeper's Twitter and Facebook accounts and finally simply blasts a car horn. Their project was chosen as one of the 20 finalists.

Yabroudi and Qian are determined to keep the momentum going for HackPrinceton and have assembled a committee of 11 students. "We hope to grow even more and get three or four more members," said Yabroudi. "In the end, we want to integrate it with the Princeton community and overall make it a friendly and fun event in addition to it being a tech-centered, competitive and educational environment."