by Tammy Tseng, Class of 2018, for the Office of Engineering Communications

HackPrinceton's organizers adopted a space theme for this year's event, so they asked hackers from around the country to come up with out-of-this-world ideas. The teams that gathered in the engineering school did not disappoint — they emerged at the end of 36 hours of tinkering with with a $20 3-D scanner, an ethical personal assistant and even a tank.

This spring's hackathon, held the first weekend of April, attracted about 500 participants, half students from Princeton and half from other universities. The annual event, one of a number of hackathons held at universities around the world, offered students workspace, food and advice for an intense weekend devoted to creating new devices and computer programs. Mentors from Princeton and industry advised the teams throughout the event. 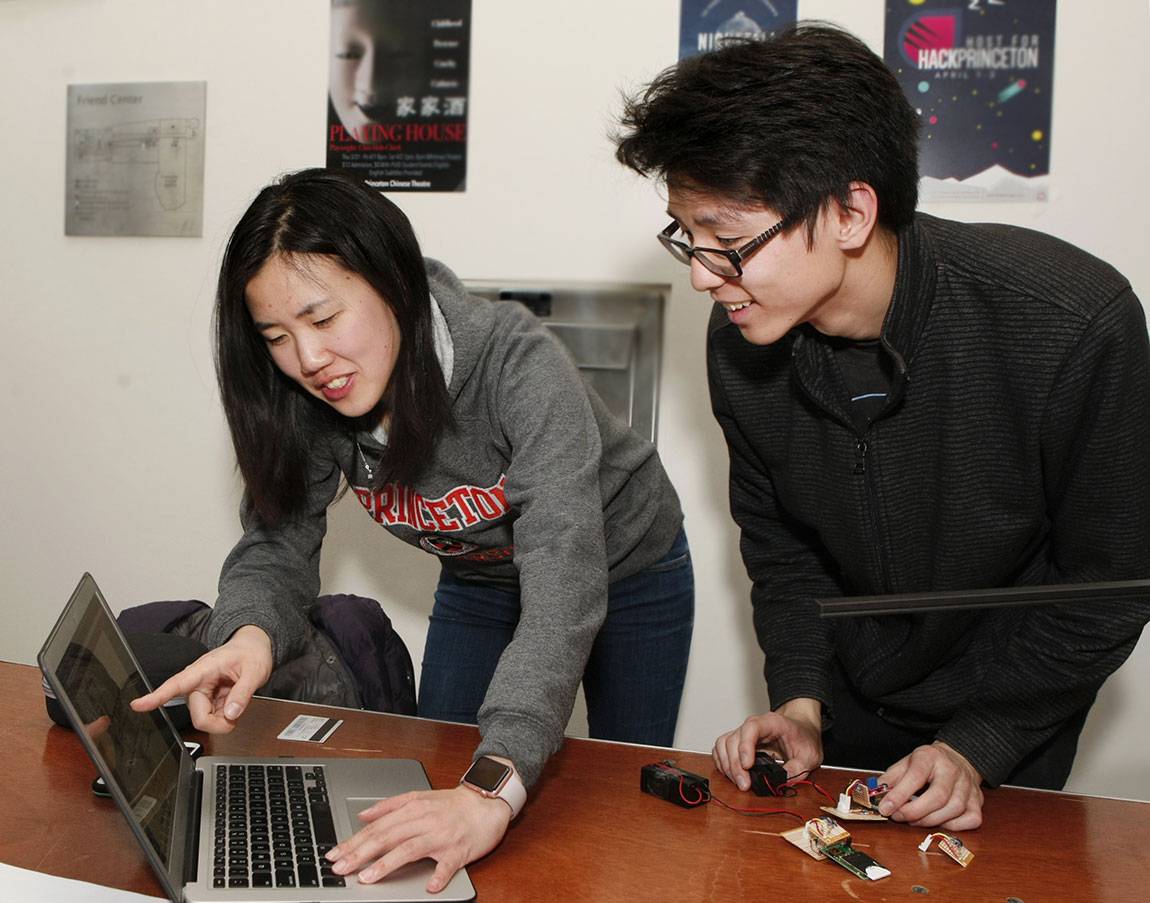 Princeton sophomores Erica Wu and Nick Jiang joined nearly 500 other participants who developed new hardware and software devices at this year's hackathon at Princeton. Wu and Jiang were part of a team that developed FreeSpace, an application that tracks available space for studying, music practice and other activities. (Photo by Frank Wojciechowski for the Office of Engineering Communications)

Tahmid Mahbub, part of a Cornell University team building a miniature, remote-controlled tank called "The Tank," was dozing on a workbench in the Electrical Engineering Lab on Saturday afternoon as his teammates scavenged for food and more parts. As soon as his alarm went off, he leapt up and immediately got back to work, grabbing a handful of rubber bands — "for a projectile launching system," he said.

"The hardware lab access is amazing," Mahbub said, adding that his teammates were trying to add a virtual reality interface to allow the driver to see the tank's point of view. "Most hackathons have some parts but not much equipment — this lab has a lot of tools for us to use."

Team Tank — like most other teams — was running high on adrenaline and creativity, and despite limited time and a general lack of sleep, they were having fun while still challenging themselves, Mahbub said. The night before the team competed in Minute to Win It, a series of 60-second challenges such as such as building newspaper towers and stacking cups. They won, Mahbub noted proudly.

It's that balance of work and play that HackPrinceton lead organizers Zachary Liu and Monica Shi, both sophomores at Princeton, wanted to make more cohesive this year.

Liu, who has also helped organize the past three HackPrinceton events, noted that "each time, there's a better focus on the participant."

This year, organizers made sure that the hackathon catered to hackers of all experience levels. That meant offering more student-run, introductory workshops on subjects like design, web development and data science.

A team of freshmen from Yale University especially appreciated mentors' help in developing StockTalk, an iPhone app that lets users test stock trading algorithms against historical market data. The team got off to a rocky start trying to learn how to use a programming technique called "callback functions," but with the help of a mentor, was able to set up a communication infrastructure.

"It's helpful to be able to message someone dedicated to helping you," said team member Annie Chen, a veteran of two other hackathons. Her team, which included experienced hackers as well as a first-time participant, placed as one of the top 10 overall finalists.

As for play, the organizers' goal was to have fun activities around the clock for students to "take a break from hacking and release some stress," Shi said. Over the weekend, hackers played laser tag, went on campus tours, and even jumped around in a bounce house on the lawn in front of Friend Center.

"We spent a lot of time playing Ping-Pong and Smash," said Andrew Ng, a Princeton sophomore whose team, Lucy, took home the Best Overall prize for a voice recognition-powered personal assistant for hands-free web browsing. Ng and his team hope to continue developing their project and release it as a web browser extension.

The organizers also changed this year's HackPrinceton judging criteria to encourage a broader range of projects. Instead of choosing first-, second- and third-place teams in overall software and hardware categories as in previous years, industry judges picked Best Overall, Most Technically Challenging, Most Creative and Best Design winners from the top 10 overall finalists. All teams also had the opportunity to win category prizes (e.g., Best Mobile App, Best First Time Hackathon Hack), as well as awards provided by industry sponsors such as Google and the Thiel Foundation.

"We wanted people to just learn and create cool things instead of focusing on the competition," Shi said.

CUNY-Baruch College student Peter Zheng and his teammates developed Cliqur, a web app to facilitate communication between professors and students in large lectures. Although they placed in the top 10 and won a sponsor prize, they were ultimately focused not on winning, but on gaining more technical experience during the weekend.

"We came in trying to learn something new," Zheng said, noting that he spent the majority of the 36 hours coaching and teaching his peers new skills.

That's precisely the mission that the organizers wanted to focus on most — actively encouraging first-time hackers and keeping seasoned ones inspired. "We want people to get excited about building things," Liu said.

Just as important, people also got excited about breaking things — and learning from the experience.

In the last 10 minutes of the competition, The Tank's microcontrollers burned out and everything stopped working. What did they learn? "Minimal functionality before fancy features," the team wrote on their project submission post, adding, "We would like to be considered for the last- minute flop award."

The Tank did end up winning the Biggest Failure to Launch prize — and Mahbub and his team came up to accept the honor with huge grins, to enthusiastic applause from their fellow hackers.