University leaders and government officials from five continents on Thursday explored challenges and opportunities from economics to diversity that higher education faces. The second day of the Princeton-Fung Global Forum in Paris also featured vigorous debate on whether online learning platforms pose more risks or rewards for academia and society.

Gideon Rosen, the Stuart Professor of Philosophy and chair of the Council of the Humanities at Princeton University, described a "nightmare scenario" spawned by Massive Open Online Courses, or MOOCs. In "MOOC World," Rosen said, institutions lured by lower costs and greater efficiencies switch fully to online learning and forsake traditional interaction between students and teachers, who may no longer know students' names.

"When those things go missing, something of real value is lost," Rosen said. "If you doubt that, just ask yourself the question, is that the sort of education you would want for your children?

"The worst-case scenario," he continued, "is that the scholar becomes a genuinely rare bird." 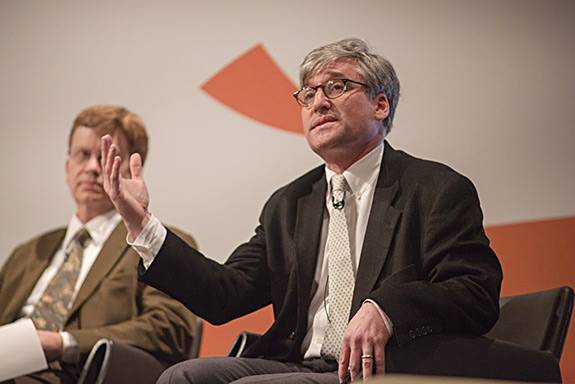 Gideon Rosen, the Stuart Professor of Philosophy and chair of the Council of the Humanities at Princeton, speaks about the risks and rewards of online education Thursday, April 10, during a Princeton-Fung Global Forum panel discussion in Paris. Rosen described a "nightmare scenario" in which technology diminishes or destroys academic life and scholarship. (Photos courtesy of Princeton University)

Rosen's remarks followed a presentation in which Daphne Koller, a professor of computer science at Stanford University, described — and made a compelling case for — the rapid international growth of the Coursera online learning system that she co-founded.

Koller described how students around the world had benefited from MOOCs from a wide range of colleges and universities, including Stanford and Princeton. She said that an online course certificate today does not carry the same weight for employers as a college diploma. But she said employers increasingly use online learning certificates as a "signaling mechanism" putting a value on online learning.

Koller said she expects a faster and broader adoption of online education in countries other than the United States that would "leapfrog" the U.S. by establishing better digital networks. She told the story of a woman in Bangladesh who changed her and six other women's lives after immersing herself in MOOCs to learn business skills. 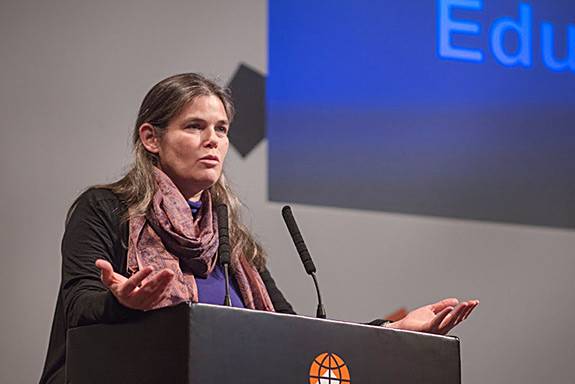 Daphne Koller, a Stanford University professor of computer science, explains the development and growth of the Coursera online learning platform that she co-founded in 2012.

William Lawton, director of the Observatory on Borderless Higher Education in London, said MOOCs and online learning do not threaten the core values of higher education. Rather, the threats are commercial imperatives forcing universities to run as businesses and equating education goals with those of government.

"The real revolution will come when there are digital platforms everywhere that are providing hundreds and thousands of courses that are designed specifically for the needs in those places," Lawton said, and when employers and society in those countries recognize and accept such credits as valid.

Lawton predicted that rather than going to extremes, most institutions will combine traditional and online practices. "The future is basically blended," he said.

Bruno Latour, scientific director at the Sciences Po Médialab in Paris and who has taught online, likened the expansion of digital education to a brain expanding its capacity upon its development of a nervous system.

"The title of my MOOC and the motto of my MOOC on scientific humanity is taken from Latin," he said. "Not 'cogito ergo sum' but 'cogitamus ergo civitas sumus.' We think, thus we form a collective together. And that, I think, is a good motto for the university of the future."

On Thursday evening, Princeton President Christopher L. Eisgruber moderated a discussion on "How to Think About the University in the Global Age." Eisgruber noted that American universities have a long history of looking overseas to improve education, citing as an example Princeton recruiting John Witherspoon of Scotland in 1766 to become its president. 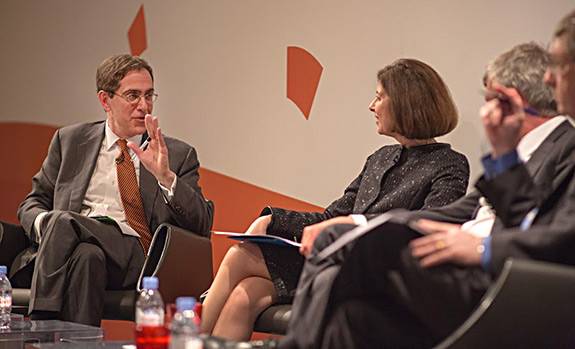 Princeton University President Christopher L. Eisgruber engages with Paulina Gonzaléz-Pose, chief of UNESCO's section for higher education, and other panelists in a conversation he moderated.

Jeffrey Lehman, vice chancellor of New York University Shanghai, observed that universities now assume that students will interact with the world during their lives, which requires a different concept of what skills they will need.

Globalization has created tremendous pressures for universities worldwide and most are not prepared to meet them, added Paulina González-Pose, chief of UNESCO's section for higher education.

The day opened with a session examining ways universities can sustain their efforts to educate increasing numbers of people worldwide seeking a college education.

"Education is an investment," said Cecilia Rouse, the Lawrence and Shirley Katzman and Lewis and Anna Ernst Professor in the Economics of Education and dean of the Woodrow Wilson School of Public and International Affairs at Princeton. "On average in the U.S., it still makes sense for students to think about going to college." 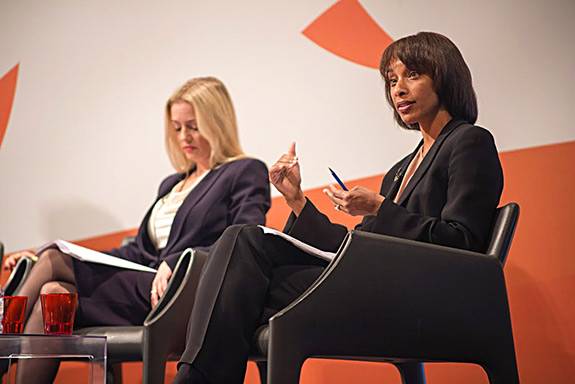 Wendy Piatt, director-general and chief executive of The Russell Group representing 24 leading universities in the United Kingdom, said "we've always tried to catch up with the U.S.,” but now UK schools must compete with institutions in China, India and other countries.

Victor Berger, special adviser to French President François Hollande for higher education and research, said France approaches education as an investment. He described common problems confronting France and other nations: "We share the same problem," he said, "how to do more with less."

Helga Nowotny, professor emerita of social studies of science at École polytechnique fédérale de Zurich, commonly known as ETH Zurich, also mentioned concerns over funding for higher education. She said she worries about the day when governments discover that MOOCs can shave education costs and act on that.

Another session Thursday focused on expanding educational access to growing, diverse populations from all economic strata around the world. Panelists argued that diversity improves both universities and societal economies yet noted that most institutions lack resources to take full advantage of the opportunity.

This is the second annual Princeton-Fung Global Forum, established from a gift to the University from William Fung, a Class of 1970 alumnus who is group chair of the Li & Fung companies based in Hong Kong. The forum is designed to bring together thought leaders and policymakers from around the world to address pressing issues of the day.

The forum opened Wednesday evening with a welcome by Eisgruber and an address by Fung. It will conclude Friday with sessions on universities as agents of social change and the future of undergraduate education.