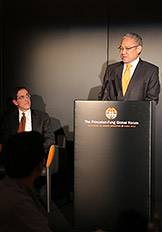 Speaking Wednesday night in Paris at the Princeton-Fung Global Forum, alumnus and former trustee William Fung describes the impact his Princeton University education had on his life and how he hopes the forum will broaden the University’s engagement in the global community. Princeton President Christopher L. Eisgruber looks on.

University leaders and policymakers from around the world gathered in Paris on Wednesday evening to begin a discussion on the future of higher education that will run over three days at the Princeton-Fung Global Forum.

In welcoming participants to the opening session, Princeton University President Christopher L. Eisgruber said the conference would address the future of higher education "at a time when it is the object of high hopes, the site of rapid change and the focus of intense scrutiny."

"It is imperative that all of us who care about higher education think creatively and share ideas about how to address the significant, evolving issues that we face today," Eisgruber said. "As this conference itself illustrates, higher education is globalizing through networks that facilitate discussion of the challenges facing colleges and universities throughout the world."

The conference in Paris is the second annual Princeton-Fung forum; the first was held in Shanghai in 2013. Partnering with Princeton in hosting the 2014 conference is the Paris-based Fondation maison des sciences de l'homme, which advances and advocates for scientific research.

The Fung Forum was established in 2012 as part of a $10 million gift to Princeton from William Fung, a member of the Class of 1970 and former trustee. The gift is intended to enhance the University's engagement with the international scholarly community and to inspire collaborative thinking about important global issues. Fung is chairman of the Hong Kong-based Li & Fung group of export and retailing companies.

William Fung, alumnus and former trustee, speaks at the opening of the Princeton-Fung Global Forum in Paris on April 9. (Princeton University, Office of Communications) 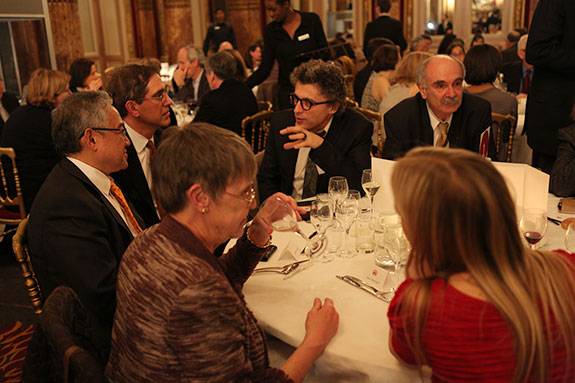 In remarks to the audience of about 200 people, Fung reminisced about how he flew in an airplane for the first time when he left home to enter Princeton. "You can imagine the profound effect Princeton has had on me," he said, adding that he hopes the forum and the discussions it produces on key issues will deepen the University's involvement in the international community.

After dinner, David Remnick, editor of The New Yorker and a 1981 Princeton graduate, moderated a panel discussion on tensions over whether higher education should be devoted to knowledge for knowledge's sake or be a means to create higher-paying jobs and overall economic success.

Christine Musselin, vice president for research at Sciences Po of Paris, said that all knowledge has value yet public expectations have shortened the time in which results are expected from researchers. "You want that knowledge to be applicable very quickly. You want technology transfer immediately," she said as she and the other panelists contemplated the meaning of "usefulness" of an education.

David Remnick (left), editor of The New Yorker, moderated a panel discussion, "Knowledge for What? Have Universities Lost Sight of Their Purpose?" during the opening session of the Princeton-­Fung Global Forum in Paris. The panelists were: Alexander Nehamas, the Edmund N. Carpenter II Class of 1943 Professor in the Humanities and professor of philosophy and comparative literature, Princeton University; Serge Haroche, director, Collège de France, 2012 Nobel Laureate in Physics; and Christine Musselin, vice president for research, Sciences Po, Paris.

Alexander Nehamas, the Edmund N. Carpenter II Class of 1943 Professor in the Humanities and professor of philosophy and comparative literature at Princeton, said some advocates for educational utility take a narrow view. "The usefulness here is usefulness only for the person getting the education," Nehamas said. "It's not usefulness for the world."

Nehamas advocated for a broader view, optimistic that educators can find ways to better convey how study of the classics or liberal arts in general leads to more able and active citizens.

Serge Haroche, director of the Collège de France and a 2012 Nobel laureate in physics, said the value of an education should not be judged merely on the salary of one's first job upon graduation.

Nehamas said in closing the discussion that universities need to get "more public support for the goals they want to promote in society."

The opening event was held in a salon at the Westin Vendôme hotel in central Paris. Events Thursday and Friday will be held at the Hôtel de Ville, which houses the offices of the mayor and city council of Paris. Sessions there will focus on the risks and rewards of online education, expanding higher education access to diverse populations, the future of undergraduate education and many other topics.

One of the high points of the conference will be a public discussion, which Eisgruber will moderate Thursday evening, titled "How to Think About Universities in the Global Age." Panelists include Paulina González-Pose, chief of the Section for Higher Education at UNESCO; Bernd Huber, president of Ludwig Maximilians University of Munich and chairman of the League of European Research Universities; Jeffrey Lehman, vice chancellor of New York University Shanghai; and François Weil, rector of the Academy of Paris and chancellor of the University of Paris.