Concluding a three-day conference in Paris, education leaders and policymakers from around the world on Friday shared a vision of the future in which universities anticipate, influence and drive change in global society.

"In a split world where everyone has a singular mindset, universities are in fact a great agent of transversality," Bernard Ramanantsoa, dean of HEC Paris, said in the opening presentation on the final day of the Princeton-Fung Global Forum.

Ramanantsoa stressed the importance of universities taking a long-term view and protecting their mission, resisting market-driven approaches that demand short-term results. Dealing with that tension was one of the themes threaded through the conference, the last two days of which were held at the historic seat of Parisian government, the Hôtel de Ville. 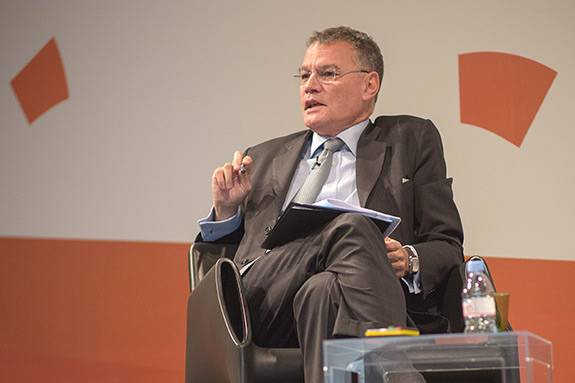 On April 11, the third and final day of the Princeton-Fung Global Forum in Paris, Bernard Ramanantsoa, dean of HEC Paris, responds to a question during a discussion of how universities can be agents of social change. (Photos courtesy of Princeton University)

The panel on social change was moderated by Francisco Marmolejo, lead tertiary education specialist and coordinator of the Network of Higher Education Specialists for the World Bank. He said universities can serve as the conscience of society. "Many times when we talk about social changes, we have to take positions that are controversial," Marmolejo said. "Many times there are issues that are, politically, extremely sensitive."

Lan Xue, dean of the School of Public Policy and Management at Tsinghua University in Beijing, agreed that social change is important but said it should not supplant the core teaching and research missions at universities.

He also described how over the past several decades most universities in China were built in large cities, luring students from rural areas. "Once they finished their studies, they no longer wanted to go back,” Xue said. "The end result is the university system becomes an internal brain-drain machine, sucking all the talent from the rural (areas) to the major cities."

Ambuj Sagar, a professor of policy studies at the Indian Institute of Technology in Delhi, added that universities must insulate themselves to protect academic freedom but not isolate themselves; they must stay connected to society. 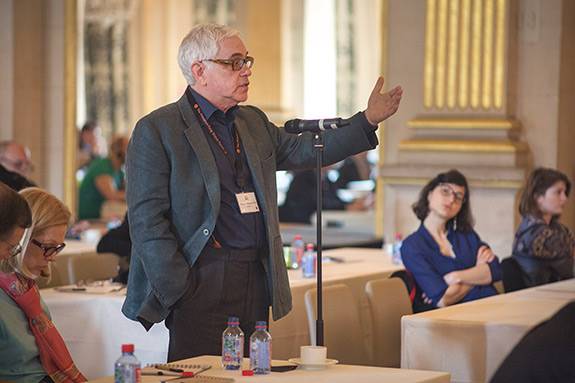 Princeton Professor Alexander Nehamas poses a question from the floor during a session on the future of undergraduate education.

Princeton alumnus and University of Chicago President Emeritus Don Randel began the final panel with an eloquent statement on the purpose of undergraduate education. Randel, who is also president emeritus of the Andrew W. Mellon Foundation, said undergraduate education should train students to think about all things, including those they cannot imagine.

An undergraduate experience should leave students with a sense of "life-long regret" that they graduate without having learned all they could during college, and that they spend the rest of their lives regretting they couldn't read all they wanted to read.

He refuted the popular view that there is a dichotomy between the sciences and the humanities. "There is really only one culture, and that is this passion for finding or making order where there didn't seem to be any.

Over the course of the conference, education executives, government officials and policymakers discussed and debated the purpose of higher education as well as the challenges and opportunities presented by advances in technology, changing demographics and financial pressures. 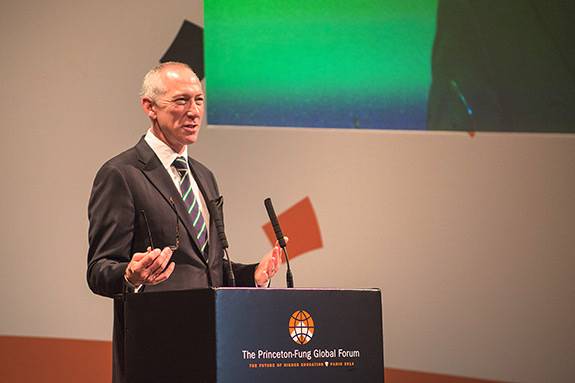 Another recurring issue was the impact of university rankings. Conference organizer Jeremy Adelman, the Walter Samuel Carpenter III Professor in Spanish Civilization and Culture and director of the Council for International Teaching and Research at Princeton, noted that rankings were the "third rail" at the conference. "It's like cat hair," he said. "You can't get it off your suit."

The Princeton-Fung Global Forum was established from a gift to the University from William Fung, a Class of 1970 alumnus and former trustee. He is group chair of the Li & Fung companies based in Hong Kong.

In closing remarks, Princeton President Christopher L. Eisgruber thanked Fung for making the forum possible. He described the Paris conference as a "wonderful series of rich conversations" that he hopes will "forge networks that will continue over time."