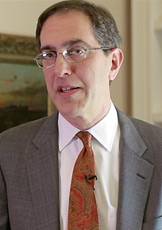 Christopher L. Eisgruger, president of Princeton University, will be the moderator at a special public conversation on "How to Think About Universities in the Global Age" during the Princeton-Fung Global Forum in Paris from April 9-11.

University leaders and policymakers from around the world will meet at the Princeton-Fung Global Forum next month to consider technological innovations, financial pressures, shifting demographics and other opportunities and challenges universities face in the 21st century.

The conference on "The Future of Higher Education" will run from April 9-11 in Paris, with most sessions held in the city's historic seat of government, the Hôtel de Ville.

"Each year the forum addresses an issue of major significance not only to academics, but also to policymakers in the world," Eisgruber said in an interview for the accompanying video. "I think this year's event in Paris will be a terrific opportunity to bring together a wide variety of people on an issue of critical importance."

The future of higher education is being shaped by societal, economic and technological forces, to be addressed at the conference in lectures, panel discussions and a special public conversation the evening of April 10. Eisgruber will moderate that conversation, titled "How to Think About Universities in the Global Age." Panelists include Paulina González-Pose, chief of the Section for Higher Education at UNESCO; Bernd Huber, president of Ludwig Maximilians University of Munich and chairman of the League of European Research Universities; Jeffrey Lehman, vice chancellor of New York University Shanghai; and François Weil, rector of the Academy of Paris and chancellor of the University of Paris.

Eisgruber noted that while higher education is "probably more important than it has been at any time in the past," colleges and universities are dealing with diverse constituencies, the growth of online education and budget pressures.

"These issues are arising at a time when universities are simultaneously facing different pressures but interacting around the world more than they ever have before," Eisgruber said.

The conference opens on the evening of April 9 with a discussion titled "Knowledge for What? Have Universities Lost Sight of Their Purpose?" David Remnick, editor of The New Yorker and a member of the Princeton University Class of 1981, will moderate. The panel features Serge Haroche, director of the Collège de France and the 2012 Nobel laureate in physics; Christine Musselin, vice president for research at Sciences Po of Paris; and Alexander Nehamas, the Edmund N. Carpenter II Class of 1943 Professor in the Humanities and professor of philosophy and comparative literature at Princeton.

Further information on the program is available at the Princeton-Fung Global Forum website.

The inaugural forum was held in Shanghai, China, in 2013 on "The Future of the City."

The forum is an annual event made possible by a gift to Princeton from William Fung, a Class of 1970 alumnus, a former University trustee and group chairman of Li & Fung, a Hong Kong-based multinational group of export and retailing companies. The gift also established the Fung Global Fellows Program at the University.