by Dan Day, Office of Communications 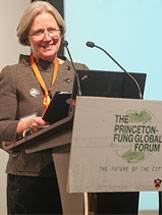 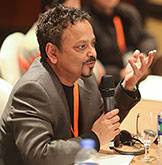 Gyan Prakash, the Dayton-Stockton Professor of History at Princeton, asks a question from the floor during one of the Princeton-Fung Global Forum sessions.

Gyan Prakash, the Dayton-Stockton Professor of History at Princeton, asks a question from the floor during one of the Princeton-Fung Global Forum sessions.

Photos and video by the Office of Communications

In the bustling megacity of Shanghai, architects, engineers, urbanists and other scholars gathered recently for the inaugural Princeton-Fung Global Forum to discuss population growth, social trends, climate change and other factors determining "The Future of the City."

Nineteen Princeton faculty members from various fields joined professors and policymakers from other institutions around the globe to share their research, identify challenges that cities face and begin a dialogue to find solutions.

"It's really intended to spark conversations," President Shirley M. Tilghman said in convening the three-day forum Jan. 30. "We hope that this will be the beginning of a wonderful series of conversations in which Princeton engages with some of the most important questions facing our world."

Play video:
Play Video: Clips from the 2013 Princeton-Fung Global Forum: the Future of the City

With a population of 23 million people and the largest city in China, Shanghai was an apt location. The conference was held at the Hongta Hotel in the Pudong district, which a mere two decades ago was mostly farmland. Today, Pudong and all of Shanghai project a jagged profile of skyscrapers and cranes erecting even more towers and high-rise housing.

"By all accounts, China is urbanizing at the rate of about 14 million people a year," in essence creating a new Tokyo annually, said Princeton Trustee William Fung, Class of 1970. Fung is chairman of the Hong Kong-based Li & Fung group of export and retailing companies. His $10 million gift to Princeton last year established the forum and the Fung Global Fellows Program.

Speakers at the forum represented universities, governments and organizations from Asia, Europe and North America. The world's urbanization was a recurring theme. 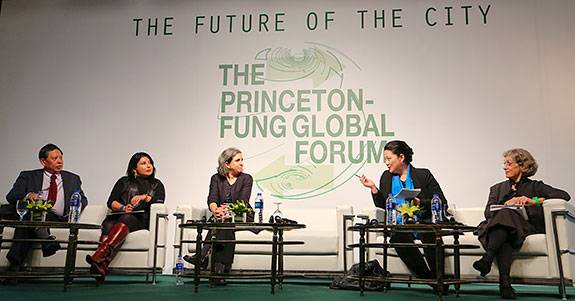 "Gandhi was wrong about the future of India being decided by its villages, not cities," said Edward Glaeser, Class of 1988, a professor of economics at Harvard University. He said cities have always drawn people away from rural areas because they offer pathways out of poverty. "At the start of the 21st century, instead of spreading out, we're clustering in," Glaeser said, noting a paradox that even as technology and social media allow people to communicate over long distances, they still congregate in urban areas.

Daniel Bell, professor of arts and humanities at Jiaotong University in Shanghai and a professor of ethics and political philosophy at Tsinghua University in Beijing, said citizens often identify more with their city than their country. "The need for community is as profound as the need for freedom," he said. 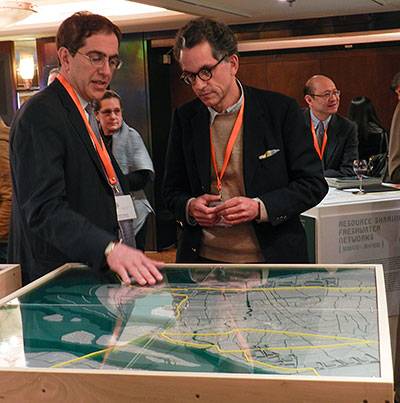 The clustering of millions of people in cities doesn't come without problems.

"What is the creature we've unleashed here?" asked Max Page, a professor of architecture and history at the University of Massachusetts-Amherst, on a panel about megacities — those with a population of 10 million or more. "They have created more slums at a greater pace than they've created prosperity."

Ye Qi, a professor of environmental policy at the Tsinghua University School of Public Policy and Management in Beijing, said Chinese citizens can own homes and cars. But they must breathe bad air and deal with choking traffic. "The cities bring us the freedom but at the same time we're suffering from a lack of freedom," he said.

Forum participants got an up-close view of Shanghai traffic, taking a bus tour into the historic center of town while smog obscured the tops of some of the city's tallest buildings. 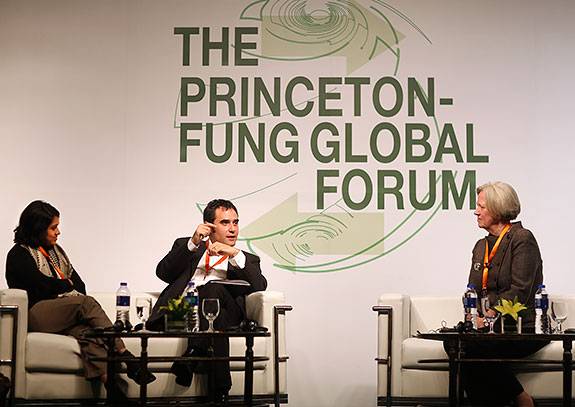 Alejandro Zaera-Polo, dean of Princeton's School of Architecture, makes a point during the forum's welcoming conversation with Tilghman, who moderated the session, and (at left) Rupali Gupte, an architect and urbanist from Mumbai, India. (Photo by the Office of Communications)

Denise Mauzerall, a professor of civil and environmental engineering and public and international affairs in Princeton's Woodrow Wilson School of Public and International Affairs, showed slides of her research on the deteriorating air in China. The foul air causes many health problems, and acid rain is so severe, she said, that "the features of the monuments are melting away" at Chinese historic sites.

The balance and interrelation of the world's ecosystems, particularly air and oceans, were frequently addressed during forum sessions. 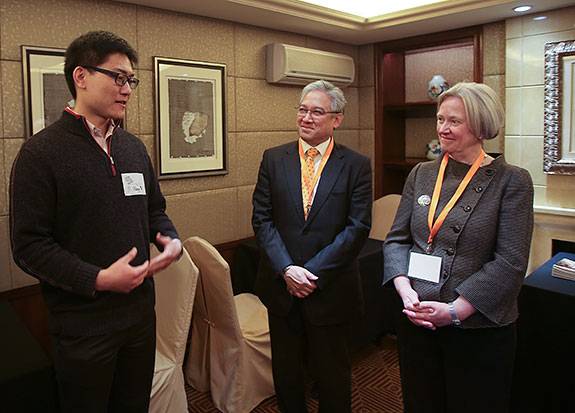 Tilghman and William Fung (center), Class of 1970, chat with Yi Wang, Class of 2009, during the Princeton-Fung Global Forum in Shanghai. Fung's $10 million gift to the University in 2012 made possible the forum as well as the Fung Global Fellows Program. (Photo by the Office of Communications)

Michael Oppenheimer, the Albert G. Milbank Professor of Geosciences and International Affairs at the Woodrow Wilson School, cited the damage Hurricane Sandy did in New York City as a call to action over climate change. "We clearly need better models and measurement" to forecast the effects of shrinking ice masses and the subsequent rise in sea levels threatening coastal settlements around the world, he said. Calling for smarter public policy and urban design, he said: "We've got to do better. And if we don't do better, it's going to be a nasty world we live in." 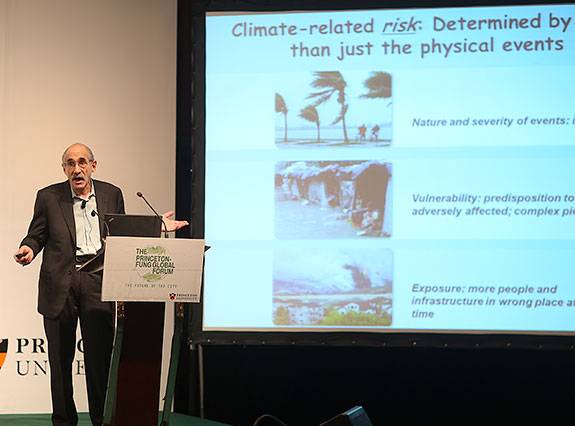 François Gemenne, a research fellow at the Institute for Sustainable Development and International Relations in Paris, said cities will need to adapt to the environmental and demographic challenges of the coming decades. "There are too many people living in regions that are way too exposed to climate change," Gemenne said, predicting that people from low-lying areas will flee to other locales as the waters rise.

Speakers offered potential solutions, too. Mauzerall pointed to successes in reducing air pollution in North America and Europe. Guy Nordenson, a structural engineer and Princeton professor of architecture, showed proposals developed and tested at Princeton for the design and conservation of natural storm surge protection for the New York harbor, Mississippi Delta and Yangtze River Delta.

Several research projects — on flood management, urban architecture, civil engineering and other topics — were featured in an exhibition on "The Resilient City" set up for the forum. The exhibition, showcasing research by Princeton faculty, students, graduate students and others, was to be moved to Tongji University in Shanghai for further display. 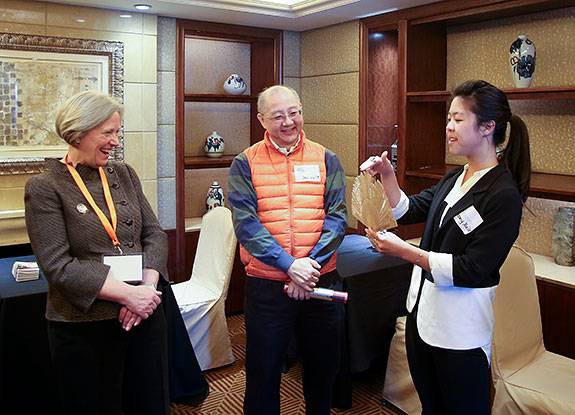 Stephany Xu, Class of 2012, presents a fan to Tilghman as David Wu, Class of 1979, looks on. (Photo the Office of Communications)

Also on the Fung Forum program was a discussion on cities in cinema, featuring American filmmaker Andrew Jarecki, Class of 1985, and Indian filmmaker Anurag Kashyap. Prompted by Gyan Prakash, the Dayton-Stockton Professor of History at Princeton, they discussed how cities play a significant role as settings in the movies they've made.

Plans for the 2014 Princeton-Fung Global Forum, to be held in Paris, are in the making under the direction of Jeremy Adelman, director of the Council for International Teaching and Research. Adelman, who is also a professor of history and the Walter Samuel Carpenter III Professor in Spanish Civilization and Culture, was the lead organizer for the Shanghai forum. 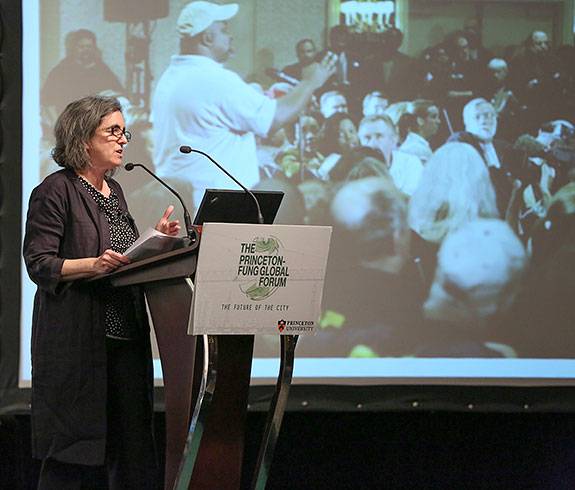 Alison Isenberg, professor of history and co-director of Princeton's Program in Urban Studies, speaks during the "Planning and Equity" session during the Princeton-Fung Global Forum. (Photo by the Office of Communications)

While Tilghman moderated the forum's opening session, Provost Christopher Eisgruber was the discussion leader for the final session, "Urban Challenges for the 21st Century."

"We are grateful to William Fung for making possible a conference that launched conversations across fields and across oceans," Eisgruber said. "The world's most pressing problems, including problems about the future of cities, are international and interdisciplinary in character. Princeton is well positioned to contribute to the solution of those problems, but we will have to forge new partnerships and collaborations in order to be maximally effective.

"Many of the Princeton faculty attending the conference mentioned to me that the conference put them in contact with new colleagues or stimulated them to think about issues and places that were not previously a focus of their research," Eisgruber said. "That is a major part of what we were trying to achieve. Jeremy Adelman's leadership was crucial to that good result, as were William Fung's vision and support."

More videos from sessions at the Shanghai forum will be made available on the Fung Forum website. 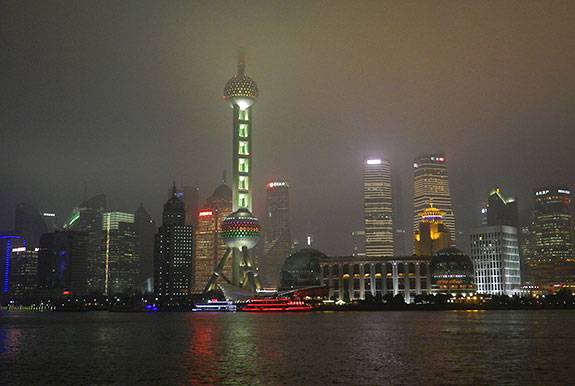 The Oriental Pearl Radio and TV Tower, the signature building of the Shanghai skyline, pokes into the fog on Feb. 1, 2013. Scholars attending the Princeton-Fung Global Forum got a view of the tower during a tour of the city. (Photo by Dan Day) 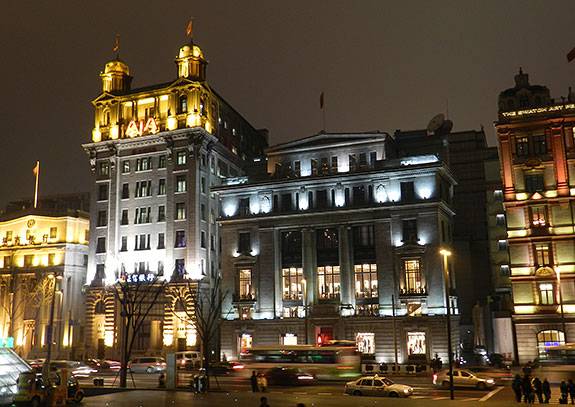 Attendees at the Princeton-Fung Global Forum had this view of classic buildings along the Bund, Shanghai's fabled district along the Huangpu River, during a tour Feb. 1, 2013. (Photo by Dan Day) 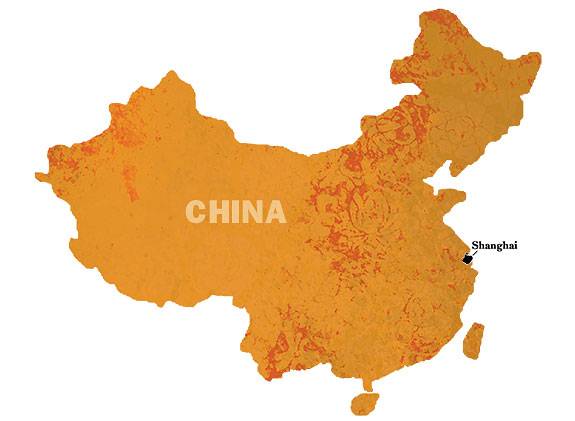