The conference, which featured more than 200 prominent and influential scholars, government officials and private and nonprofit sector leaders, was co-sponsored by the Woodrow Wilson School of Public and International Affairs' Center for Health and Wellbeing (CHW) and the Nicholson Foundation. 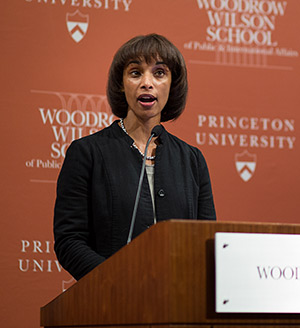 Cecilia Rouse, dean of the Woodrow Wilson School of Public and International Affairs, gives the opening remarks at a conference on "Big Data and Health: Implications for New Jersey's Health Care System." (Photos by Tori Sulewski/Fotobuddy for the Wilson School)

Cecilia Rouse, dean of the Wilson School, said the purpose of the conference was to learn how big data affects health care.

"The four panels we've assembled will explore big data in the context of health, privacy, cost and transparency, as well as opportunities and challenges in New Jersey," Rouse said in opening the event. "Our keynote speakers will examine how data can transform health care and help clinicians improve care and patient outcomes."

On a state level, big data has the potential to answer vital health questions that cannot be addressed using standard techniques, said Janet Currie, the Henry Putnam Professor of Economics and Public Affairs and director of CHW. While people understand the costs, in terms of potential threats to privacy, state officials need to better understand the potential benefits. She cited her research on the effects of flu on preterm delivery, the effects of air pollution from cars on the health of babies and the effects of the foreclosure crisis on increasing hospital admissions as examples.

Yet big data in health care is often difficult, if not impossible to access, experts said.

"Policymakers need to understand that big data can save lives," said Jeffrey Brenner, founder and executive director of the Camden Coalition of Healthcare Providers. "Legislation needs to be written and branches of New Jersey government need to cooperate with one another to agree upon a structure of how to make data available."

Looking at the national landscape, keynote speakers Farzad Mostashari, visiting fellow at the Brookings Institution's Engelberg Center for Health Care Reform, and Aneesh Chopra, the first and former chief technology officer of the United States, discussed innovations in technology and big data that benefit patients and protect their privacy. 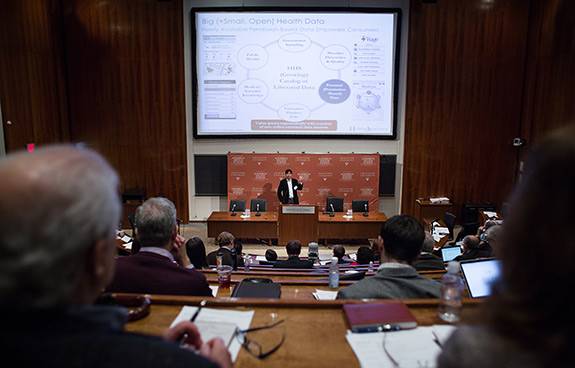 "Technology is available for physicians to know the health of their patients and use that information for preventative measures any time they want," Mostashari said. "If a patient goes to the hospital, their physician should be alerted right away. Physicians have the best working knowledge of their patients, know the best way to treat them and should no longer see patients just in the office."

In an effort to allow patients total control over their medical information, Chopra said the days of patients reading the small print on a consent form and signing their name should end.

"I'm able to allow Netflix and Apple TV to interconnect, but if I'm unhappy with Apple TV I can log into Netflix and de-permission Apple TV from accessing my Netflix history, simply by clicking a button," Chopra said. "Yet we don't do that in health care. If we started to allow patients control, new business models would emerge."

Yet despite the benefits of big data, concerns over privacy are real, said Joel Reidenberg, visiting professor of computer science and visiting research scholar of information technology policy at Princeton, and a professor at Fordham University's School of Law.

"Privacy will crash big data if we don't get it right," Reidenberg said. He cited the example of inBloom, a $100 million big data program designed to help make better decisions about education policy, losing all nine of its state partners because of privacy concerns over student data.

Julie Brill, commissioner of the U.S. Federal Trade Commission and a 1981 Princeton alumna, said she sees potential for big data projects, but privacy is paramount in the discussion.

"Privacy is an ethical discussion, it's a structural discussion and it's a legal discussion," she said. "Rather than have this big notion that big data is going to benefit mankind, we have to be specific about the benefits of any specific project and balance that with the potential harms." 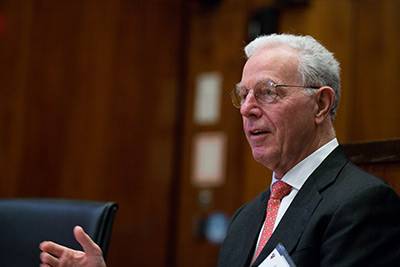 Health care economics expert Uwe Reinhardt, Princeton's James Madison Professor of Political Economy, asks a question during a session. He also spoke on a panel about big data's implications for cost and transparency.

Among the 24 speakers were Jan Nicholson, president of the Nicholson Foundation; Uwe Reinhardt, the James Madison Professor of Political Economy and professor of economics and public affairs at Princeton; Glenn Steele Jr., president and CEO of Geisinger Health System; Nirav Shah, New York State Commissioner of Health; Edward Felten, the Robert E. Kahn Professor of Computer Science and Public Affairs and director of the Center for Information Technology Policy; Mary O'Dowd, commissioner of the New Jersey Department of Health; and David Knowlton, president and CEO of the New Jersey Health Care Quality Institute.

Reflecting on the conference, Galen Benshoof, a second-year Master in Public Affairs student at the Wilson School, said the speakers provided him with a newfound appreciation for big data technologies.

"What stuck out to me most was how thoughtful you have to be in the collection and usage of data," Benshoof said. "Working with consumers and patients to collect and interpret data the right way is an interesting process and something I hadn't considered."