A sudden closing of a major airline hub such as the main Atlanta airport would undoubtedly leave thousands of travelers stranded. Because of Atlanta's hub status, such a blow would be felt nationally, altering the travel plans of millions while impacting the travel industry, tourism and other segments of the economy.

A team of economists including Esteban Rossi-Hansberg of Princeton University's Woodrow Wilson School of Public and International Affairs have developed a model that can measure the widespread effects of local industry fluctuations such as the one in this fictitious scenario. Gauging the power of these fluctuations, or shocks — which can be positive or negative — could be a useful tool when it comes to designing policies to manage past and future shocks.

Described in a working paper for the National Bureau of Economic Research (NBER), the model takes into account multiple industry sectors and geographic areas, and, with some manipulation, could be applied to any country in the world.

"The economy is intricately linked," said Rossi-Hansberg, an author on the paper and the Theodore A. Wells '29 Professor of Economics and Public Affairs at the Wilson School. "While some local shocks have little influence over the economy, others can have widespread effects on states, other sectors and the economy as a whole."

To study the issue, the team — which included Lorenzo Caliendo from Yale University, Fernando Parro from the Federal Reserve System's Board of Governors and Pierre-Daniel Sarte from the Federal Reserve Bank of Richmond — measured the effect of local productivity shocks across all 50 U.S. states and 26 industries on the Gross Domestic Product (GDP). Examples of these shocks included natural disasters, improvements in technology, changes in local regulations and even large corporate bankruptcies. They used a dataset of interregional trade from the year 2007, the most recent year available.

After performing multiple calculations, the researchers began to see a pattern: the importance of geography. Dramatically different effects were felt in the overall economy depending on where the local shock occurred. Likewise, effects were felt differently based on a state's influence over the economy. The researchers chalk this phenomenon up to both centrality and trade — an integral part of the interconnected U.S. economy.

"Shocks to a local industry are likely to change consumption and the inputs used in production. This will lead to different trade patterns, affecting not only local producers but other industries in different regions," said Rossi-Hansberg. "Before we can understand these effects, we need to specify the key characteristics of a region." 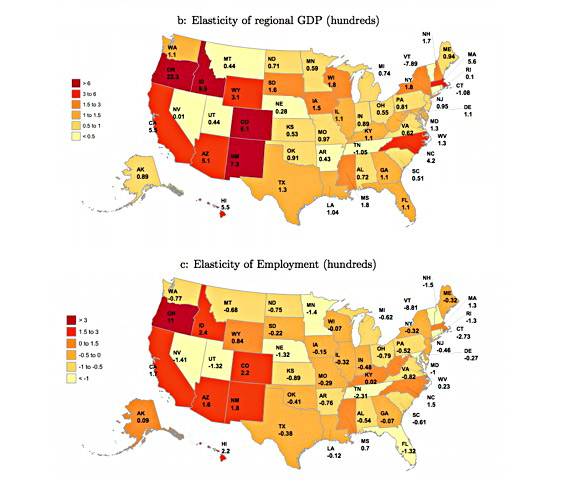 A team of researchers including Princeton economist Estaban Rossi-Hansberg has developed a model for measuring the effects of a local economic event on the broader U.S. economy. When a 10 percent productivity shock was added to the computers and electronics industry, the model showed some states such as California and Massachusetts — both important players in the industry — grew. Oregon, however, saw the largest increase in production and employees as a variety of sectors in the state sold goods and services to important producers in the industry. (Images courtesy of Estaban Rossi-Hansberg, Woodrow Wilson School of Public and International Affairs and Department of Economics)

To test the functionality of their model, Rossi-Hansberg and his collaborators examined the computers and electronics industry. In 2007, this industry represented 2.5 percent of the U.S. GDP. He and his colleagues gave the industry a 10 percent productivity boost.

Perhaps unsurprisingly, the researchers found that some states, like California and Massachusetts — which have both been important players in the industry — grew in terms of production as a result of the shock. Employees flocked to these states, looking for jobs. However, the biggest winner of all was Oregon, which saw the largest increase in production and employees.

"Oregon seems to be in a position where the loss in the computer industry employment is counteracted by the gains in other sectors that sell to states, like California or Washington (home of Microsoft Corp.), that are important producers in the industry," said Rossi-Hansberg. "There is a complex network of links, and the great thing about our model is that it can take all of these effects into account."

Of even more interest, said Rossi-Hansberg, is that many of the states surrounding California and Massachusetts actually suffered negative consequences from the shock in terms of outgoing trade and employment. These states include Vermont, Connecticut, Rhode Island and Nevada. Rossi-Hansberg explained that, because of the shocks, residents moved away from these states and relocated to California or Massachusetts. As a result, these smaller states lost their presence in the technology industry, leading to employment losses.

"In our paper, we do a variety of these types of counter-factual experiments," said Rossi-Hansberg. "The interest of the different experiments probably depends on the actual shocks an economy has received recently. Regardless, we find that, as in this case, the spatial characteristics of the economy play a crucial role in mediating the impact of the shock."

Rossi-Hansberg and his colleagues are hopeful that this type of exercise will be repeated for other countries in the future, but they urge caution when trying to extrapolate from one country to the next.

"Particularly interesting would be the case of Japan, which, as an island, is subject to its share of weather shocks. Such an exercise could assess the medium term impact of such an event on migration, productivity, employment and welfare," Rossi-Hansberg said. "Each country needs to do its due diligence. The evaluation of policies to relocate production in space, disaster rebuilding efforts or large federally funded infrastructure projects crucially depends on this analysis."

The paper, "The Impact of Regional and Sectoral Productivity Changes on the U.S. Economy," was released online in May and updated in June.