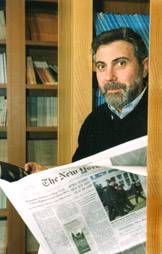 Princeton economist Paul Krugman, acclaimed in his field for insights into international trade patterns that overturned longheld theories about the global economy before he rose to popular distinction as a media columnist and commentator, has been awarded the 2008 Nobel Prize in economics.

Krugman, a professor in the Department of Economics and in the Woodrow Wilson School of Public and International Affairs at Princeton since 2000, was the only winner of this year's Nobel Memorial Prize in Economic Sciences. "By having shown the effects of economies of scale on trade patterns and on the location of economic activity, his ideas have given rise to an extensive reorientation of the research on these issues," the Royal Swedish Academy of Sciences noted in announcing the award today.

A press conference is scheduled for 2:30 p.m. today in Dodds Auditorium, Robertson Hall, in the Woodrow Wilson School of Public and International Affairs on Washington Road on the Princeton University campus. For more information, call (609) 258-3601 or e-mail commpro@princeton.edu.

In addition to teaching and conducting research at Princeton, Krugman is a well-known columnist for The New York Times and commentator on economic, policy and political issues, including the current crisis in the world's financial markets.

"It's deeply gratifying," said Krugman early this morning of the Nobel announcement. "There is so much shock involved that I can't really sort out. I think it will take a few days before I can assess it."

Princeton President Shirley M. Tilghman said, "Paul Krugman has had a significant impact on both economics and public policy, and we are delighted by this recognition of his work."

Anne-Marie Slaughter, dean of the Wilson School, added, "Paul Krugman has been at the cutting edge of research on the most important phenomenon of our time: policymaking in the face of rapid and seemingly inexorable globalization. At the same time, he is one of our most visible faculty members in the public sphere, actively engaging critical public policy debates. We congratulate him heartily, honoring him as the school's second Nobel laureate in economics in only six years."

Daniel Kahneman, a professor of psychology and public affairs, was awarded the Nobel Prize in economics in 2002.

"Paul Krugman's work on 'the new economic geography' provides a unified account of the determinants of trade flows across countries, and the location decisions of firms and workers," said Christina Paxson, chair of the Department of Economics. "His research has had a profound impact on the way economists think about international trade and globalization. We are enormously proud of him for this well-deserved award."

Beginning in 1979, Krugman proposed a new model that provided a theory for the effects of globalization and free trade. It offered a better explanation than the well-established theory of foreign trade that certain countries have a comparative advantage over others in more effectively producing particular goods based on their supplies of natural resources, labor or capital.

Krugman recognized that the long-established theory did not fully explain modern trends that showed international trade becoming increasingly concentrated among smaller numbers of producers and nations. His work shed light on key economic issues such as how companies decide where to locate, how people decide where to live and why dense urban areas become centers of economic activity while existing alongside sparsely populated rural areas.

"When I began working on this, world trade was a lot smaller than it is now, so it certainly is relevant to the changed environment," Krugman said today. "And I guess you could say I was being global before the world was. I was very concerned in the second part of this work with the location of people and industries within countries, and we certainly are seeing all of these issues about urban growth and regional growth in the U.S. These are issues that don't go away."

Krugman's stature as a rising star in the field was recognized in 1991 when he was awarded the John Bates Clark Medal, which is given by the American Economic Association to the economist under 40 who has made the most important contributions to economics.

"Paul's contributions on the trade and monetary sides of international economics have revolutionized the way economists think about the global economy," said University of California-Berkeley economist Maurice Obstfeld. "He has a unique ability to convey novel and profound concepts in a deceptively simple way. This simplicity gives him his unmatched ability to describe clearly the essence of very complex economic policy problems.

"The beauty and inspiration of Paul's technical research has always struck me as being quite unique," Obstfeld said. "If there has been a Mozart in my generation of economists, it is Paul Krugman."

"Paul Krugman almost single-handedly changed the course of two centuries of thinking about international trade and economic geography," said Gene Grossman, Princeton's Jacob Viner Professor of International Economics. "Whereas generations of economists thought about differences between countries as the basis for their trade, and about the natural advantages of locations as the basis for agglomeration, Krugman taught us that economies of scale motivates trade between similar countries, and that, in the presence of such economies, accidents of history can explain the growth of cities and regions." For example, Krugman's work has examined how economies of scale helped Rochester, N.Y., home of Eastman Kodak Co., become a hub for the photographic industry.

"Paul Krugman was the undisputed leader in research that modified and extended the traditional theory of international trade," said Avinash Dixit, Princeton's John J. F. Sherrerd '52 University Professor of Economics. "That theory was based on the notion of perfect competition among a large number of small sellers and was increasingly seen to be anachronistic in a world where many industries were oligopolistic, with a small number of large firms. Aircraft and autos were the exemplars of this new reality of trade."

Dixit added, "Large-scale firms exist because of economies of scale in production; Paul developed ideas about the implications of this for the location of such firms and revolutionized the field of economic geography from a largely descriptive endeavor into an analytical one. It is for these contributions that he has long been regarded as a shoo-in for the Nobel."

Paxson noted that Krugman's seminal 1991 article on international trade, "Increasing Returns and Economic Geography" (.pdf), published in the Journal of Political Economy, "is a classic on the reading lists of graduate courses in international trade. His research is also of practical significance, in that it helps us better understand the drivers behind globalization, urbanization and capital movements across countries."

In the 1990s, Krugman began to raise his public profile as a columnist for Slate and Forbes magazines, as he attempted to help inform the popular debate on international trade and economic policy. In 2000 he became a twice-weekly columnist for The New York Times, where he has gained attention for his criticisms of the Bush administration's economic and political philosophies. In addition to his prolific scholarly works, his books include the bestsellers "The Great Unraveling" (2003) and "The Conscience of a Liberal" (2007).

After taking the Times columnist position, Krugman said in 2001 he was determined to "help people get things right," adding that "I often feel there are glaringly obvious things that just aren't being picked up."

"I started taking on some causes, trying to speak to wider audiences," he said. "For example, I was upset that confused notions about international trade were driving public debate on economic policy -- such as the whole competitiveness issue, the commonly-used metaphor of international trade as a war with winners and losers."

Krugman's Nobel award came five days after former Princeton researcher Osamu Shimomura was named a winner of the 2008 Nobel Prize in chemistry for a discovery he made while working at University. It also is the second year in a row that the Nobel economics prize has a Princeton connection. One of the 2007 winners, Eric Maskin, has been a visiting lecturer with the rank of professor in economics at Princeton since 2002 and is a professor at the neighboring Institute for Advanced Study.

Krugman is the eighth Princeton faculty, staff member or alumnus to be awarded a Nobel in economics. He will receive the award, which is officially known as the Sveriges Riksbank Prize in Economic Sciences in Memory of Alfred Nobel, on Dec. 8 at Stockholm University.

The press conference will be Webcast live and archived online for later viewing. It also will be broadcast live on TigerTV Channel 7 on campus and on Channel 27 on Princeton cable television.

For satellite television trucks only, limited parking will be available in the circle behind Robertson Hall or on Prospect Avenue. All other vehicles will be towed.