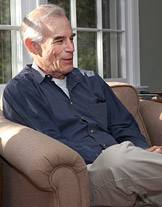 Princeton University economics professor Christopher Sims has been awarded the 2011 Nobel Prize in economics along with Thomas Sargent, a New York University economist who is a visiting professor at Princeton. Sims, shown here in his home this morning after the announcement, was lauded for his work in developing tools to analyze the effect of monetary policy on the economy. 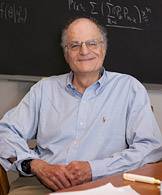 Sargent, who is teaching macroeconomics courses at Princeton this fall, is widely known for his work on coordinating monetary and fiscal policy, stabilizing inflation and fighting unemployment.

Princeton University professor Christopher Sims has been awarded the 2011 Nobel Prize in economics along with Thomas Sargent, a New York University economist who is a visiting professor at Princeton, for developing tools to analyze the effect of monetary policy on the economy.

Sims, who is Princeton's Harold H. Helm '20 Professor of Economics and Banking, has been a faculty member at Princeton since 1999.

Parking and other instructions for news media are located below. Members of the news media should continue to check the Princeton home page for updates throughout the day.

Sims and Sargent were honored with the Nobel Memorial Prize in Economic Sciences for their work in answering "questions regarding the causal relationship between economic policy and different macroeconomic variables such as GDP (gross domestic product), inflation, employment and investments," the Royal Swedish Academy of Sciences noted in announcing the award today.

"Economic-policy decisions are influenced by expectations about developments in the private sector," the Nobel announcement said. "The laureates' methods can be applied to identify these causal relationships and explain the role of expectations. This makes it possible to ascertain the effects of unexpected policy measures as well as systematic policy shifts."

"I am delighted that the exceptional scholarly work of Professor Sims and Professor Sargent has been recognized with a Nobel Prize," said Princeton President Shirley M. Tilghman. "Characteristically, on the day of the announcement they were both in the classroom teaching. Professor Sims is the third permanent member of our faculty in the past decade to win the Nobel Prize in economics and Professor Sargent is the second visiting member to be so recognized. These recognitions pay tribute not only to these individuals, but to the leading role that Princeton plays in scholarship and teaching throughout the field of economics."

Sims said this morning he was "very surprised" about receiving the notification of the award. "We jumped right out of bed, because we imagined it would be a very busy morning," he said, adding that at first his wife couldn't find the talk button on the phone when the Nobel representatives contacted him "so they called back 10 minutes later." 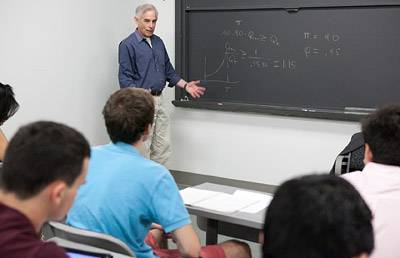 Sims leads a session of his undergraduate course on "Money and Banking" on Oct. 10, just a few hours after learning that he was awarded the 2011 Nobel Prize in economics.

Sims has developed statistical tools that have been useful in unraveling the effect of monetary policy on the economy. "These methods have been used in many countries, and one of the things that have given them credibility is they tend to give consistent results," he said.

Regarding the impact of his research, Sims said, "The most extensive applications have been by central banks that are trying to work out the effects of monetary policy.

Sims joins two other tenured Princeton faculty member who have received a Nobel Prize in economics in the last decade, following Paul Krugman in 2008 and Daniel Kahneman in 2002. In total, 13 members of the current Princeton faculty (including emeritus and visiting professors) are recipients of the Nobel Prize.

Mark Watson, acting chair of Princeton's economics department, said of Sims and Sargent, "They've changed macroeconomics in the biggest way possible, and allowed us to credibly answer questions that we just couldn't have answered before."

"Sims is one of the nicest guys in the world, and one of the best citizens we have in the department," he added. Sims postponed the sabbatical he was set to take this year because the department needed him to teach an undergraduate course, Watson said.

"Sims has trained hordes of graduate students; he's a wonderful adviser. He brings out the best research in our students, and he cares and spends lots of time with them," Watson said.

Daniel Lewis, a Princeton junior who is majoring in economics, is taking a course on "Money and Banking" with Sims this semester. Of the 30 students in the course, he also was among the handful of students randomly assigned to a precept with Sims, which met this morning.

"This is what it means to be at Princeton -- to have a precept with a Nobel Prize winner," Lewis said. "It's just amazing." 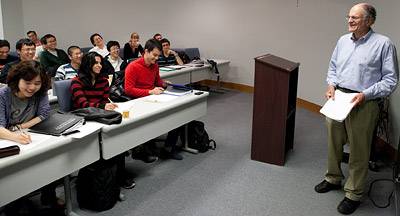 At Princeton this semester, Sargent is teaching a graduate course on macroeconomic theory. He is shown here during the class on Oct. 10, the same day he was named a co-winner of the 2011 Nobel Prize in economics.

"In addition to doing pathbreaking research, Sargent is an inspirational classroom teacher," Watson said. "Students leave his class so excited. He really turns graduate students on to macroeconomics. He's been doing that his entire career."

Sargent is widely known for his work on coordinating monetary and fiscal policy, stabilizing inflation and fighting unemployment. He and Sims have been longtime colleagues, going back to their graduate school days together at Harvard University. They also served together on the faculty of the University of Minnesota for more than a decade.

Sargent said he, too, was startled upon receiving the call notifying him of his Nobel Prize.

"I wasn't surprised when Chris Sims won, but I was surprised that I won," Sargent said in an interview this morning. He added that, upon telling his wife the news, she "told me to bring a tie, which wasn't very helpful -- but I guess it's useful."

Lauding the depth of Sims' work and its widespread theoretical and practical applications, Sargent said, "It's had an influence on the way all macroeconomists and actually all empirical workers look at time series -- data evolving over time. I was fortunate to work with Chris early, and it had a huge impact on how I do my work."

Regarding his own work, Sargent said he focuses on using "statistical methods to judge the success and failure of theoretical models that emphasize how people form expectations about government policies, and how those expectations influence what actually happens."

Sargent said the research that he and Sims have conducted has established useful tools that are used by monetary policymakers.

"It's used to characterize honestly what the data can say about how much uncertainty there is about the effects of policy," he said. "The data tell us we know some things and we don't know some other things. Central banks and treasuries are very interested in knowing what view of the world they can take. Chris and I have students at central banks all over the world, and they are applying this work."

Sims and Sargent will share the award of 10 million Swedish kronor (currently $1.5 million). The awards will be handed out Dec. 10, the anniversary of prize founder Alfred Nobel's death.

Alexander Hall is located off Nassau Street; view its location on the Princeton campus map. Driving directions to Princeton are available online.

Members of the news media who wish to participate by phone can call in using the following (please ask questions in English):

The press conference will be available via satellite feed: