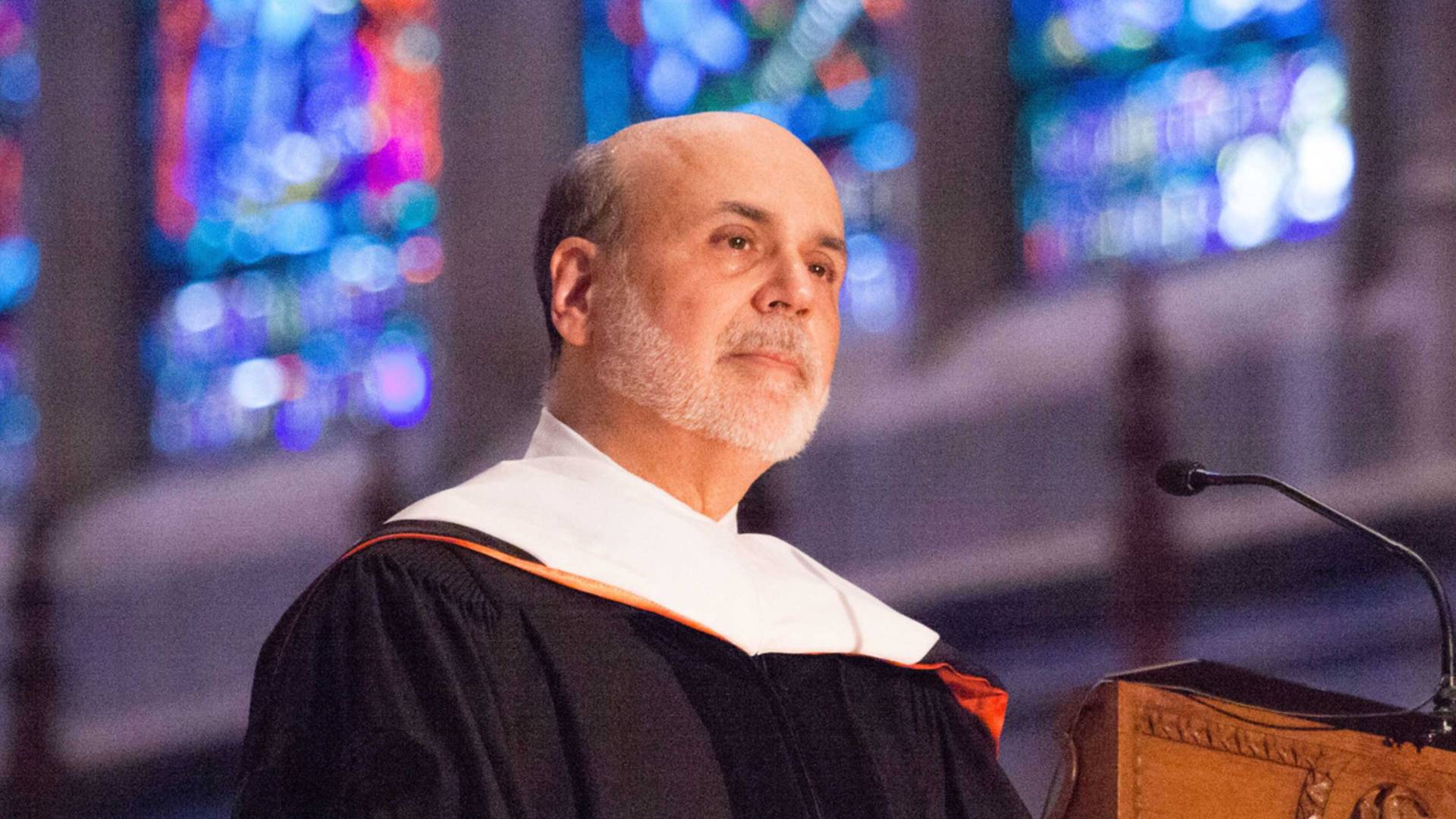 Ben Bernanke, a Princeton professor of economics and public affairs from 1985 to 2002, chairman of the economics department from 1996 to 2002, and founder of the Bendheim Center for Finance, is among three winners sharing this year’s Nobel Prize in economic sciences.

The Royal Swedish Academy of Sciences awarded the Sveriges Riksbank Prize in Economic Sciences in Memory of Alfred Nobel 2022 to Bernanke, Douglas Diamond and Philip Dybvig for significantly improving “our understanding of the role of banks in the economy, particularly during financial crises.” The prize amount is 10 million Swedish kroner, about $900,000, divided among the recipients.

"All of us at Princeton know Ben Bernanke to be not only a marvelous scholar but also a generous teacher, beloved colleague, and devoted University citizen," said Princeton President Christopher L. Eisgruber. "By using his path-breaking research, extensive learning, and practical wisdom to help lead America through a difficult financial crisis, Ben has exemplified brilliantly Princeton's commitment to be 'in the nation's service.' The Princeton community joins in congratulating him enthusiastically on this extraordinary and well-deserved honor."

An important finding in the laureates' research is why avoiding bank collapses is vital.

The three laid the foundation of modern banking research in the 1980s. It clarifies why we have banks, how to make them less vulnerable in crises and how bank collapses exacerbate financial crises.

The Nobel Committee wrote: “Their analyses have been of great practical importance in regulating financial markets and dealing with financial crises. For the economy to function, savings must be channeled to investments. However, there is a confiict here: Savers want instant access to their money in case of unexpected outlays, while businesses and homeowners need to know they will not be forced to repay their loans prematurely.”

Dybvig, the Boatmen’s Bancshares Professor of Banking and Finance at Washington University in St. Louis, Olin Business School, was an assistant professor at Princeton from 1980-81.

"This is a wonderful prize,” said Wolfgang Pesendorfer, the Theodore A. Wells ’29 Professor of Economics and economics department chair. “The three authors were instrumental in shaping our understanding of financial intermediation and its connection to macroeconomic fluctuations. I am, of course, most excited about the award to our former colleague Ben Bernanke. His 1983 paper on the Great Depression is a landmark contribution where he convincingly establishes the centrality of bank failures to the Great Depression. More broadly, his research demonstrates the importance of the financial sector for propagating and amplifying economic crisis, a view that was vindicated during the financial crisis from 2007-08 and the following Great Recession.”

In a press conference held at the Brookings Institution, where Bernanke is currently Distinguished Fellow in Residence, Economic Studies, Bernanke said his cell phone was turned off early this morning, and that he first learned of the news when his daughter in Chicago called him on his landline.

“I am incredibly honored, of course, to be a co-winner,” he said. “It was completely unexpected. … I am very happy to be sharing this prize with Douglas Diamond and Phil Dybvig, whose work on bank runs was very seminal, had a big impact on me in the early ’80s when I was working on these issues.”

Bernanke gave special mention to his collaborators, including Mark Gertler, the Henry & Lucy Moses Professor and professor of economics at New York University. He also cited later historical work he completed with Harold James, Princeton's Claude and Lore Kelly Professor in European Studies and professor of history and international affairs, examining countries with banking crises in the 1930s. He and James discovered that those countries where the gold standard prevailed, which meant they had inflationary and monetary contractions, suffered the most in terms of output and employment.

Bernanke was a member of the Federal Reserve Board starting in 2002 and served as its chair from 2006 to 2014, helping shape and guide economic and monetary policy. He also was chairman of the Council of Economic Advisers from 2005 to 2006.

After teaching at Stanford Graduate School of Business from 1979 to 1985, Bernanke joined the Princeton faculty as a professor of economics and public affairs. In 1994, he was named the Class of 1926 Professor of Economics and Public Affairs. He became economics department chair in 1996 and also was named the Howard Harrison and Gabrielle Snyder Beck Professor of Economics and Public Affairs that same year. He took public service leave from Princeton in 2002, when he joined the Federal Reserve Board, and resigned in 2005.

“Ben was foundational in shaping the economics department at Princeton,” Brunnermeier said. “He put a lot of energy into building up the department and founded the Bendheim Center. In this way, he not only pushed the research frontier in economics and finance, but also others’ research at Princeton University. He had a big impact on the profession.”

A toast, from Bendheim Center and economics colleagues

Brunnermeier, Sims, Pesendorfer and Alan Blinder, the Gordon S. Rentschler Memorial Professor of Economics and Public Affairs, were among those who attended a champagne toast honoring Bernanke at the Bendheim Center on Monday afternoon.

Several of those in attendance shared personal recollections of their work and their interactions with Bernanke.

“We remember him extremely fondly as a model of a department chair,” Pesendorfer said. “It couldn’t have happened to a nicer guy, so I’m extremely excited to celebrate this prize.”

Blinder, who played a prominent role in recruiting Bernanke to Princeton and who preceded Bernanke as a vice chairman of the board of governors of the Federal Reserve, said he felt fortunate having him as a colleague and a co-author at Princeton. He recalled recruiting Bernanke as “this young kid out of Stanford Business School,” remarking that he was a “superstar” even as a graduate student.

“I was bowled over by young Ben Bernanke's early work, and did everything I could to attract him to Princeton, where he fit perfectly and was very productive as a scholar,” Blinder said. “I practically cried when he left, though it was certainly for a good cause!"

Bernanke remains chair of the Bendheim Center Advisory Council. He earned his bachelor’s degree in economics from Harvard in 1975 and a Ph.D. in 1979 from Massachusetts Institute of Technology. Princeton awarded him an honorary degree during 2016 Commencement exercises. He was the University's 2013 Baccalaureate speaker.

The laureate joins a number of other Princeton faculty and alumni who have been awarded Nobel Prizes.