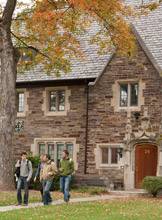 Researchers at Princeton's Bendheim Center for Finance are responding to the challenge of understanding today's rapidly changing economy by strengthening connections between the often separate disciplines of finance, economics, engineering and public policy. 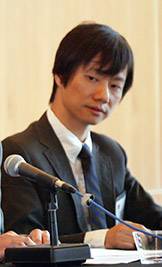 Photo by Frank Wojciechowski for the Bendheim Center for Finance

What happens in the halls of the Federal Reserve, at Chinese construction sites or in North Dakota oil fields ripples through financial markets and across the world economy today like never before, making it difficult to understand what is happening — and why.

At Princeton's Bendheim Center for Finance (BCF), researchers are responding to that challenge by strengthening connections between the often separate disciplines of finance, economics, engineering and public policy. This inclusive approach helps bring clarity to today's rapidly evolving economy.

"BCF's pioneering work — with its emphasis on market inefficiencies and the interaction among finance, the macro economy and monetary policy — has helped shape the modern way of thinking in the profession and among policymakers," said Markus Brunnermeier, the Edward S. Sanford Professor of Economics and, since last summer, the director of the Bendheim Center.

The center has 40 affiliated faculty members, drawn from economics, operations research and financial engineering, the Woodrow Wilson School of Public and International Affairs, and computer science. It offers a master's degree in finance that draws about 25 students each year and an undergraduate certificate that currently enrolls more than 200 students from about 15 majors. 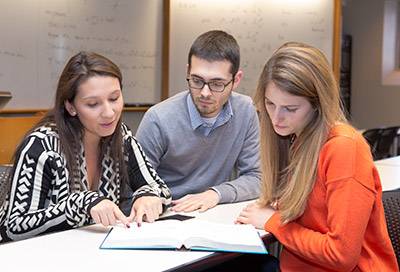 The master’s in finance program at the Bendheim Center draws students with backgrounds in finance and central banking, including (from left) Karen Leiton, Sebastian Maass and Sonya Flechon. (Photo by Denise Applewhite, Office of Communications)

Wei Xiong, the Hugh Leander and Mary Trumbull Adams Professor for the Study of Investment and Financial Markets and a professor of economics, said Brunnermeier has encouraged and helped make possible a more inclusive view of financial markets, monetary policy and the broad economy.

"Because of his work, as well as of the work of many of us together, the Bendheim Center is now widely recognized in both academic and policy circles," said Xiong, who works both on understanding the role of financial investments in commodity markets and the role of real-estate investment in the Chinese economy.

The background and research interests of faculty affiliated with the Bendheim Center demonstrate its interdisciplinary approach.

Among those faculty members are Harrison Hong, the John Scully '66 Professor of Economics and Finance, whose research has covered topics including behavioral finance and stock market inefficiency; former Federal Reserve Governor Alan Blinder, the Gordon S. Rentschler Memorial Professor of Economics and Public Affairs, who has done work on fiscal policy, monetary policy and the distribution of income; and Jianqing Fan, the Frederick L. Moore, Class of 1918, Professor in Finance, a professor of operations research and financial engineering, and chair of the Department of Operations Research and Financial Engineering, whose primary research focuses on developing and justifying statistical methods that are used to solve problems from the frontiers of scientific research.

Ben Bernanke, then chair of the Department of Economics and later chairman of the Federal Reserve Board, helped establish the Bendheim Center in 1997. Yacine Ait-Sahalia, the Otto A. Hack '03 Professor of Finance and Economics and a professor of economics, was the Bendheim Center’s founding director and served in the role until 2014. He remains an active affiliated faculty member. 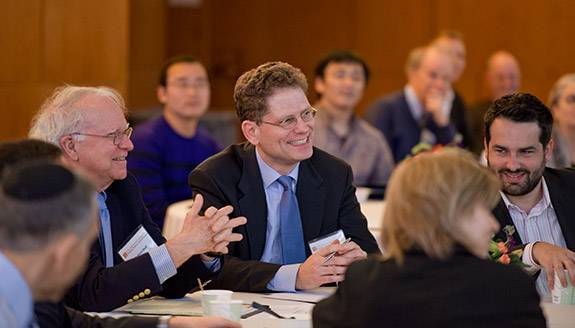 In his own research Brunnermeier has looked to the past, studying asset bubbles from the 17th century boom and bust in the value of tulip bulbs in the Netherlands known as Tulipmania to the U.S. real-estate bubble that burst in the early 21st century to understand how such bubbles form and the best ways to address them. Brunnermeier, who earned his Ph.D. from the London School of Economics, also looks ahead, developing models to accurately assess and monitor systemic risk to help avoid failures that proved costly in the recent financial crisis.

"When the financial crisis started, one big problem was that regulators didn't have data important to understanding what was going on. They didn't know who was buying what assets," Brunnermeier said, pointing particularly to instruments such as derivatives that weren't reflected in conventional measures. The result, he said, was that risk built up dangerously and regulators weren't aware of it until significant damage was done to the economy.

To help address that problem, Brunnermeier and Arvind Krishnamurthy of Stanford University edited a book published last fall called "Risk Topography: Systemic Risk and Macro Modeling" that includes contributions from researchers, central bankers and other financial-market experts who explore the possibilities for advanced models that can lead to more accurate measurement of what's happening in the economy.

"You really want to know where the risk is building up and go across the whole economy," Brunnermeier said.

Brunnermeier is working on a book project about the Euro crisis with Harold James, Princeton's Claude and Lore Kelly Professor in European Studies, a professor of history and international affairs, and an affiliated faculty member at the Bendheim Center, and Jean-Pierre Landau, a former French central banker and a professor at Sciences Po in France.

Brunnermeier works with Yuliy Sannikov on incorporating financial frictions in macroeconomic models and in modern models of money. Sannikov, a professor of economics and an affiliated faculty member at the Bendheim Center, was recently awarded the American Finance Association's Fischer Black Prize recognizing the person under 40 for original research that is relevant to finance practice. 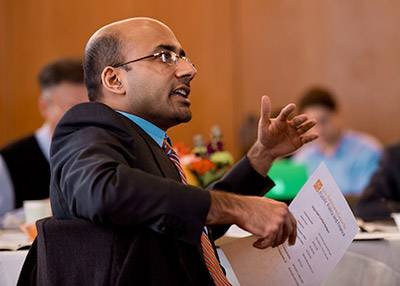 Atif Mian, the Theodore A. Wells '29 Professor of Economics and an affiliate of the Bendheim Center, studies the connections between finance and the macro economy using housing and other consumer data. (Photo by Sameer A. Khan/Fotobuddy)

Atif Mian, the Theodore A. Wells '29 Professor of Economics, another affiliate of the Bendheim Center, studies the connections between finance and the macro economy using various housing and consumption data. In a recent book, "House of Debt," Mian and co-author Amir Sufi, a professor at the University of Chicago, examined the impact of household debt on the economy.

In the book, they explain how the Great Recession and Great Depression, along with Europe's current economic malaise, were caused by a large increase in household debt followed by a significant drop in household spending. The book also explains why debt continues to threaten the global economy and what needs to be done to fix the financial system.

Master's student Karen Leiton, who previously worked at the central bank in Colombia, said she was drawn to the program in part by its breadth.

"You get a very deep quantitative background," Leiton said. "It also gives you a lot of possibilities to lead your studies as you want." 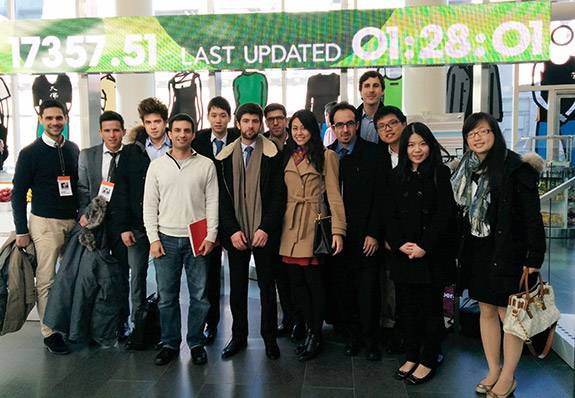 Students pursuing a master's degree in finance stop in at the headquarters of Bloomberg during a trip to New York. (Photo courtesy of the Bendheim Center for Finance)

Brunnermeier said an understanding of the workings of central banks is important for finance students regardless of their career plans.

"It's very important for finance students to be alert to what central bankers are doing and what their goals are," he said. "If you don't understand how they interact with the economy and with Wall Street it's very hard to be a successful investor."

Junior Karina Marvin, a computer science major pursuing a certificate in finance, said she has learned concepts that would be valuable to any college student, such as "Analysis of Big Data."

"Big data is a popular topic these days, and through this class I was able to truly understand not only what that meant, but also to do some actual analysis of huge data sets," Marvin said.