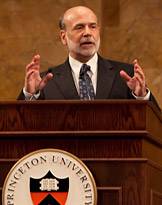 In an address at Princeton on Sept. 24, Federal Reserve Chairman Ben Bernanke discusses the importance of the field of economics in confronting the recent financial crisis and emphasizes the need for further work by policymakers and researchers to prevent future downturns. Bernanke was a faculty member at Princeton for two decades before entering public service in the White House and Federal Reserve.

Federal Reserve Chairman Ben Bernanke defended the importance of economic research in confronting the recent financial crisis and presented a vision for further study and reforms needed to avert future downturns during a speech Friday, Sept. 24, at Princeton University.

"The financial crisis did not discredit the usefulness of economic research and analysis by any means. Indeed, both older and more recent ideas drawn from economics have proved invaluable to policymakers attempting to diagnose and respond to the financial crisis," said Bernanke, speaking to a capacity crowd at Richardson Auditorium in Alexander Hall. "Recent events have made clear that understanding the role of financial markets and institutions in the economy, and of the effects of economic developments on finance, is more important than ever."

Bernanke, who taught at Princeton for two decades before entering public service in 2005, was invited to speak by two University centers, the Bendheim Center for Finance and the Center for Economic Policy Studies.

In her introduction, Princeton President Shirley M. Tilghman said that Bernanke, an authority on the Great Depression, "had the unenviable task of responding to the worst financial crisis since the 1930s and a recession that continues to adversely affect the lives of millions of Americans. … Under his leadership, the Fed responded with extraordinary measures that reflected both the gravity and the novelty of the crisis."

She added, "The full impact of these initiatives will not be known for some time, but it is not too early to say that were it not for the actions taken by the Fed and its chairman, the crisis in confidence that marked the Great Recession would have been far worse and the larger economic fallout infinitely more disruptive." 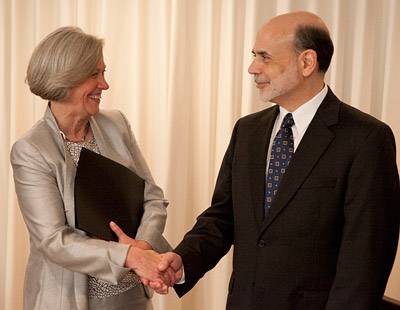 Princeton President Shirley M. Tilghman, who introduced Bernanke at the lecture, greets him prior to taking the stage. The Fed chair was the founding director of the University's Bendheim Center for Finance.

Speaking to an audience of Princeton students, faculty, staff and members of the public, Bernanke both defended and gave guidance to economists, citing their field's importance in understanding and responding to financial problems.

Bernanke discussed causes of the crisis, such as failure to manage risk by private institutions and the failure of regulatory systems to correct this overleveraging. He then defended the Federal Reserve's response to the crisis, such as providing funds to financial institutions, buying mortgage-based securities and putting banks through "stress tests."

Bernanke cautioned that, while the recession has officially been declared over, more work needs to be done by policymakers to encourage economic growth. "Although financial markets are for the most part functioning normally now, a concerted policy effort has so far not produced an economic recovery of sufficient vigor to significantly reduce the very high level of unemployment," he said.

He emphasized the role that academic research plays in economic policymaking.

In dealing with nervous banks that had stopped lending as the crisis mounted, "two centuries of economic thinking on runs and panics were available to inform the diagnosis and the policy response" by the Fed and central banks around the world to lend money to solvent institutions, Bernanke said.

Economic research also helped formulate policies to address incentives, excessive risk-taking and companies that were "too big to fail." New financial reform legislation and measures taken by the Federal Reserve are increasing oversight of the financial system and attempting to limit risk-taking, Bernanke noted.

"Numerous steps, both prescribed in the legislation and taken independently by regulators, will work to make our financial system more resilient to shocks," he said. "Together, better design of private- and public-sector frameworks for managing risk, better monitoring and supervision, and a more resilient financial system do not by any means guarantee that financial crises will not recur, but they should both reduce the risk of crises and mitigate the effects of any that do happen." 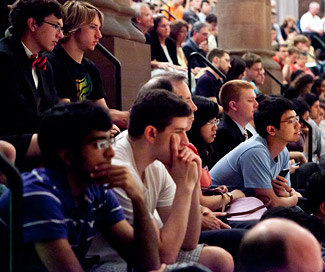 Students listen intently as Bernanke stresses that the financial crisis has made the study of economics more important than ever.

During a question-and-answer session at the end of his remarks, Bernanke discussed a range of topics, including reforms to the banking system, the long-term outlook for the national debt and deficit, and the pace of the economic recovery.

Professor Markus Brunnermeier, whose work on asset price bubbles was cited by Bernanke in the address, said he liked Bernanke's organization of the field into research (or economic science), tools and implementation.

"It was a nice way of separating the different aspects of economics," said Brunnermeier, the Edwards S. Sanford Professor of Economics at Princeton. "In economic science, there is not so much new to be done. But there is in these other areas, and Princeton is at the forefront, pushing these lines of research."

"If there is anything that we try to teach our students, it is to look at how to analyze problems and talk about them lucidly. What a wonderful example he provided," Malkiel said.

Maxx Frost, a junior economics major pursuing a certificate in finance, plans to work in public finance after graduation, and found the speech useful in his understanding of how policy decisions are made.

"I thought he was very good at describing a lot of the theories … he implements in practice when trying to solve such enormous national problems," Frost said.

Feruz Erizku, a senior majoring in operations research and financial engineering, said she was excited to see Bernanke in person after reading his articles and watching him on television.

"He was clear in noting that economics as a field is growing and developing, and there are things it needs to address in taking a more holistic approach," Erizku said. "I thought he defended it but with a note of caution." 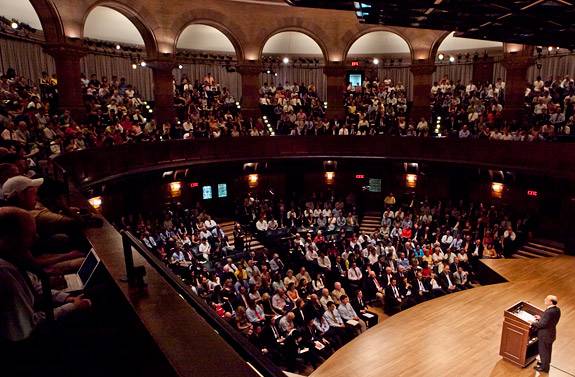 Bernanke was a member of the Princeton faculty from 1985 until July 2005, a month after he was appointed as chairman of President George W. Bush's Council of Economic Advisers. When tapped for the post, he was on leave from the University, serving on the Federal Reserve Board of Governors. At Princeton, he held a joint appointment in the Department of Economics and the Woodrow Wilson School of Public and International Affairs, and was chair of the economics department from 1996 to 2002.

In January 2006, Bernanke was appointed to a four-year term as chairman of the Board of Governors for the Federal Reserve System, taking office on Feb. 1, 2006. He began his second term as chairman on Feb. 1 of this year, and his 14-year term on the board ends in 2020.

Bernanke was the founding director of the Bendheim Center for Finance, which is celebrating its 10th anniversary this fall. The center supports interdisciplinary research in finance, primarily from a quantitative or mathematical perspective. It offers an undergraduate certificate in finance and a master in finance, as well as advising for doctoral students in related departments.

The Center for Economic Policy Studies, which is celebrating its 20th anniversary this year, is a membership organization that supports economic policy-related research in Princeton's economics department and brings together experts in academia, business and government.

Bernanke's talk will be archived for later viewing on Webmedia.