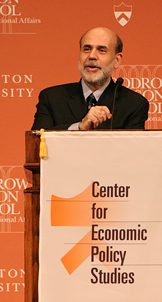 Former Princeton economist Ben Bernanke returned to the University on Feb. 24 to deliver his first public policy address as chairman of the Federal Reserve Board.

Returning to Princeton University for his first public policy address as Federal Reserve chairman, Ben Bernanke stressed that stable prices are the key to economic and job growth -- endorsing the path charted by predecessors Alan Greenspan and Paul Volcker.

Speaking on Friday, Feb. 24, in Richardson Auditorium, Alexander Hall, the former Princeton economist also noted that the Fed should not try to burst potential "bubbles" in asset prices by shifting interest rates, saying that the U.S. central bank's role is not to decide whether the cost of homes, stocks or other assets are too high.

Bernanke spoke at the culmination of a daylong conference on government service that was part of the Woodrow Wilson School of Public and International Affairs' yearlong 75th anniversary celebration. In discussing the Fed's evolution, Bernanke said that the current consensus view that low, stable inflation drives economic progress and controls unemployment was not always a widely held notion.

"Central bankers, economists and other knowledgeable observers around the world agree that price stability both contributes importantly to the economy's growth and employment prospects in the longer term, and moderates the variability of output and employment in the short to medium term," he said.

"But that view did not always command the support that it does today," Bernanke said. "Notably, during the 1960s and early 1970s, some policymakers appeared to believe that price stability and high employment were substitutes, not complements. Specifically, some influential voices of the time argued that, by accepting higher inflation, policy-makers could bring about a permanently lower rate of unemployment."

That notion was disputed by economists such as Milton Friedman and Edmund Phelps, whose work influenced Volcker (a 1949 Princeton alumnus) as he "embarked on his campaign to break the back of U.S. inflation" upon taking over as Fed chairman in 1979. Greenspan, who succeeded Volcker in 1987, followed that path.

His predecessors' efforts to stabilize U.S. inflation "resulted from the constructive interplay between academic research and practical policy-making experience … that significantly improved policy outcomes and economic welfare in the United States," Bernanke noted, adding that such collaboration is a principal objective of the Wilson School.

The consensus view on inflation and unemployment "has not been achieved easily, however, but is the product of many years of policy experience, policy leadership and sustained economic analysis," Bernanke said. "No doubt we will continue to learn about the economy and economic policy, even as we benefit from the insights of those who went before us. I am sure the Woodrow Wilson School, its faculty and its students will continue to play an important role in that ongoing process."

After his formal remarks, Bernanke took questions from Princeton students. Addressing whether the Fed should try to defend against potential bubbles in home or stock prices by changing interest rates, he said, "It's generally a bad idea for the Fed to be the arbiter of asset prices. In particular, the Fed doesn't really have any better information than other people in the market about what the correct value of asset prices is." Bernanke also said he expected that the relatively low savings rates among Americans will improve.

Following Bernanke's address, sophomore Rob Biederman said, "As an economics major, it was fantastic to see the first speech by a sitting chairman of the Federal Reserve Board. It was very kind of him to have it here rather than in Washington. … It certainly was a very good overview of the past 40 years of monetary policy."

Volcker, who attended the address after participating in the government service conference earlier in the day, said that Bernanke argued the case for continued emphasis on stable inflation "in a good professorial manner."

Bernanke served on the Princeton faculty from 1985 until July 2005, a month after he was appointed as chairman of President Bush's Council of Economic Advisers. He was sworn in as Fed chairman Feb. 1. At Princeton, he held a joint appointment in the Wilson School and the Department of Economics and served as chairman of the economics department from 1996 to 2002.

In introductory comments, Princeton economist Alan Blinder, a former Fed vice chairman under Greenspan, noted that Bernanke moved into government service after "an academic career that can only be characterized as a smashing success," marked by "stunningly original work on how monetary policy works."

Blinder remarked that, in just a few weeks as the world's most influential economic policy-maker, Bernanke "has already wowed the crowd with his initial congressional testimony, about which it was noted he answered in clear, intelligible English. I guess all those years in Princeton classrooms did pay off."

Bernanke's address was sponsored by the Wilson School and Princeton's Center for Economic Policy Studies.