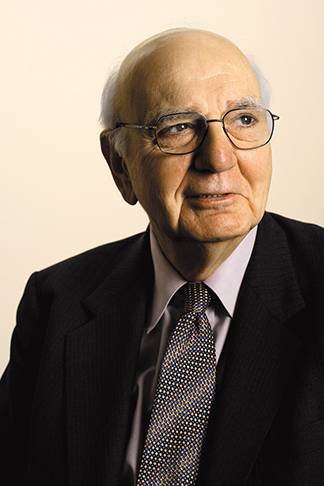 Photo courtesy of Paul A. Volcker

The public service papers of Paul A. Volcker, former chairman of the Federal Reserve, are now part of the permanent collection of Princeton University, where the economist earned his undergraduate degree in 1949.

These documents, which include correspondence, speeches, reports and memos, are housed in the Seeley G. Mudd Manuscript Library, a division of the Princeton University Library's Department of Rare Books and Special Collections.

Consisting of 29 boxes, with an additional 30 expected in the coming months, the collection primarily documents Volcker's time as chairman of the Board of Governors of the Federal Reserve System, where he served under Presidents Jimmy Carter and Ronald Reagan. Several of the boxes relate to his tenure as undersecretary of the Treasury for International Monetary Affairs and as president of the Federal Reserve Bank of New York. Additional materials will be transferred to the library detailing Volcker's work with the World Bank, United Nations and President Barack Obama's Economic Recovery Advisory Board, on which he served as chairman.

Volcker — now 88 years old — said he was "delighted to add to the historical records placed with the fine Mudd Library facilities." He said, "There are more papers yet to come!"

"Paul Volcker is one of Princeton's most distinguished alumni from the second half of the 20th century, and so I am very happy that the Mudd Library will be home to the documents from his remarkable public service career," said Daniel Linke, University archivist and curator of public policy papers. "His papers touch upon our nation's — and the world's — economic history, as well his work with a number of humanitarian efforts. This collection will be a rich resource for students and scholars for many years to come."

Most recently, Volcker was instrumental in creating the "Volcker Rule," a regulation in the Dodd-Frank Wall Street Reform and Consumer Protection Act banning U.S. commercial banks from proprietary trading. This rule, which Obama publicly endorsed in 2010, specifically prohibits banks from making certain investments, especially with regard to hedge funds and private equity funds. The rule is intended to prevent banks from making speculative investments, such as those seen during the 2008 financial crisis.

Volcker also is widely cited for ending high and rising inflation levels during the 1970s and 1980s, nearly reaching a rate of 15 percent per year. As the 12th chairman of the Federal Reserve, Volcker, then a Democrat, enacted a tight-money policy. With restrictive monetary policies, the federal funds interest rate went from 11.2 percent in 1979 and peaked at 20 percent in 1981. The unemployment rate briefly rose to over 10 percent.

While viciously attacked for his policy of preemptive restraint, Volcker's approach yielded powerful results: The economy was recovering by 1982, and inflation fell below 3 percent by the end of his term in 1983. Of Volcker's inflation policies, economist William Silber said, "The combination of sound monetary and fiscal integrity sustained the goal of price stability."

Prior to his work as Federal Reserve chairman, Volcker divided his time between the Federal Reserve Bank of New York, the Chase Manhattan Bank and the U.S. Department of Treasury.

During his time with the Treasury, Volcker played an influential role in President Richard Nixon's decision to end the conversion of American dollars into gold, economic measures known as the "Nixon Shock." This led to the abolition of the Bretton Woods system, an international monetary exchange system.

Upon leaving public service in 1987, and again in 2003, Volcker headed private, nonpartisan National Commissions on the Public Service, each recommending a sweeping overhaul of the organization and personnel practices of the United States federal government. After leaving the Federal Reserve, Volcker became chairman of the New York City banking firm Wolfensohn & Co.

Between 1996 and 1999, Volcker headed a committee formed to identify existing dormant accounts and other assets in Swiss banks of victims of Nazi persecution. These documents will ultimately be in the collection at Princeton.

Since 2000, Volcker has served as chairman on a number of committees and groups including the Board of Trustees for the International Accounting Standards Committee; the Independent Inquiry Committee investigating corruption in the United Nations Oil-for-Food Program, which allowed Iraq to sell oil in exchange for food, medicine and other needs; and the Economic Recovery Advisory Board. And in 2007, he chaired a panel for the World Bank to review the operations of the Department of Institutional Integrity.

Volcker earned his undergraduate degree from Princeton University in 1949 and his master's in political economy from Harvard University in 1951. He attended the London School of Economics from 1951 to 1952.

Spanning 28 linear feet, Volcker's public service documents will be available within a year at the closed-stack Mudd Library, a state-of-the-art facility that houses more than 35,000 linear feet of archival documents.

"Given all that Paul Volcker has done related to public service, we fully expect this to be a well-used collection," Linke said.

While Mudd Library will maintain most of Volcker's public service papers, documents detailing Volcker's time at the Treasury Department are housed at the National Archives and Records Administration in Washington, D.C.

For more information on the collection, visit the online guide.