Princeton University professor Christopher Sims accepted his Nobel Prize in economics Dec. 10 during a ceremony at the Stockholm Concert Hall in Sweden. The prize was awarded to Sims along with Thomas Sargent, a New York University economist and visiting professor this semester at Princeton, for developing tools to analyze the economic causes and effects of monetary policy. 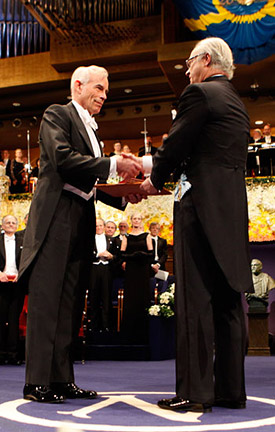 Sims, who is Princeton's Harold H. Helm '20 Professor of Economics and Banking, has been a faculty member at Princeton since 1999, and is the third tenured faculty member at Princeton to win the Nobel Prize in economics in the past decade. He and Sargent are longtime colleagues, and are currently teaching partners for a graduate course at Princeton. Their work has revolutionized the field of macroeconomics and how it is applied by central banks and governments around the world.

"Thank you for recognizing the many women and men like us who use statistics and economic theory to understand how governments and markets can improve peoples' lives," Sargent said in a speech that he gave on behalf of both winners during a banquet in Stockholm City Hall following the presentation ceremony.

Sims delivered his prize lecture, "Statistical Modeling of Monetary Policy and Its Effects," on Dec. 8 at Stockholm University. Advocating for "serious probability-based policy modeling," his lecture focused on work done in the 1930s by Jan Tinbergen, a Dutch economist who in 1969 received the first Sveriges Riksbank Prize in Economic Sciences in Memory of Alfred Nobel.

Using historical data about economic events, Sargent and Sims have independently worked to develop and critique models that seek to analyze the cause and effects of monetary policy. The laureates' work has been largely based on the U.S. economy and has provided consistent results when applied to other economies.

Sims and Sargent, who are among 13 Nobel laureates this year, share the award of 10 million Swedish kronor (currently $1.5 million). At the prize award ceremony in Stockholm, the Nobel laureates received a diploma and a medal from King Carl XVI Gustaf of Sweden. More information about the award events is available on the Nobel Prize website. 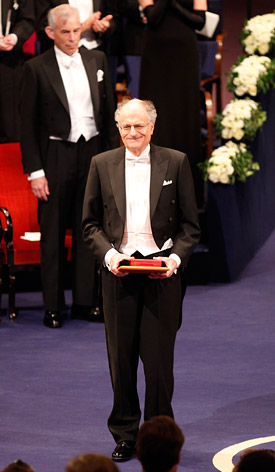 Thomas Sargent, a New York University economist and visiting professor at Princeton, is honored with the Nobel Prize in economics as his co-winner, Sims, looks on. (© The Nobel Foundation 2011/Photo: Frida Westholm)