Princeton economist Paul Krugman was presented with the Sveriges Riksbank Prize in Economic Sciences in Memory of Alfred Nobel on Dec. 10. He was recognized for his academic work on international trade patterns and economic geography that has greatly influenced research in his field. (© The Nobel Foundation 2008/Photo: Hans Mehlin)

Also honored on Dec. 10 was Osamu Shimomura with the 2008 Nobel Prize in chemistry for a discovery he made while working at Princeton. Shimomura, who was a researcher in the Department of Biology from 1960 to 1982, was recognized along with two other researchers for his work on the green fluorescent protein (GFP) in jellyfish. (© The Nobel Foundation 2008/Photo: Hans Mehlin) 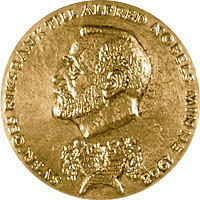 The medals bear the portrait of Alfred Nobel and are cast by Myntverket -- the Swedish Mint. (Photo: ®© The Nobel Foundation)

In accepting his Nobel Prize in Sweden this week, Princeton economist Paul Krugman gave credit to a global network of colleagues who helped him reshape the way people understand how the world's economy functions.

On Dec. 10 -- the 112th anniversary of Alfred Nobel's death -- Krugman was among 11 laureates to receive the prize in a ceremony at the Stockholm Concert Hall. The sole winner of this year's Sveriges Riksbank Prize in Economic Sciences in Memory of Alfred Nobel, he is acclaimed in his field for insights into international trade patterns that overturned long-held theories about the global economy.

Krugman, in remarks at the banquet in Stockholm City Hall following the ceremony, said, "My thanks go out, in this wonderful moment, to those who made it possible -- to my wife, to my parents, and, not least, to my colleagues around the world.

"The great economist John Maynard Keynes once wrote of the foolish things a man thinking alone can temporarily come to believe," he said. "Fortunately, I did not have to think alone: The creation of the modern theory of international trade and economic geography was very much a collective effort. The new ideas were hammered out over years of conferences and correspondence involving men and women from many countries. This group of men and women constituted one of history's great invisible colleges, and together we made a revolution in the way economists think about the most fundamental aspects of the global economy.

"So let me express my deepest gratitude to the Economics Prize Committee for recognizing this work, and for honoring my own part in the achievement," he concluded. "It's an honor that I will spend the rest of my life trying to live up to." 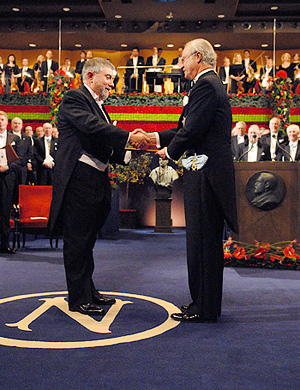 Krugman has been a professor in the Department of Economics and in the Woodrow Wilson School of Public and International Affairs since 2000. In announcing the award earlier this fall, the Royal Swedish Academy of Sciences noted, "By having shown the effects of economies of scale on trade patterns and on the location of economic activity, his ideas have given rise to an extensive reorientation of the research on these issues."

In addition to teaching and conducting research at Princeton, Krugman is a well-known columnist for The New York Times and one of the country's foremost liberal commentators on economic, political and policy issues, including the current crisis in the world's financial markets.

Krugman's Nobel award announcement on Oct. 13 came five days after former Princeton researcher Osamu Shimomura was named a winner of the 2008 Nobel Prize in chemistry for a discovery he made while working at the University.

Shimomura, who was a researcher in the Department of Biology from 1960 to 1982, also was honored in Stockholm along with two other researchers for his work on the green fluorescent protein (GFP) in jellyfish. The protein, a key tool of contemporary bioscience, was discovered by Shimomura in his lab at Princeton in 1961.

Shimomura left Princeton at the end of the academic year in 1982 to join the staff of the Marine Biological Laboratory in Woods Hole, Mass. He is a professor emeritus there and at Boston University Medical School. 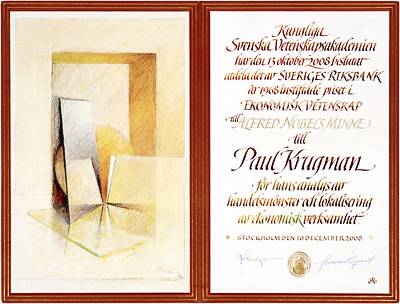 At the prize award ceremony in Stockholm, the Nobel laureates received a diploma and a medal from King Carl XVI Gustaf of Sweden. Earlier in the week, the winners presented lectures at Stockholm University. Also on Dec. 10, the Nobel Peace Prize was awarded in Oslo, Norway. More information about the awards events is available on the Nobel website.

This is the second year in a row that the Nobel economics prize has a Princeton connection. One of the 2007 winners, Eric Maskin, has been a visiting lecturer with the rank of professor in economics at Princeton since 2002 and is a professor at the neighboring Institute for Advanced Study.

This is the second Nobel Prize in economics in the past six years for a Princeton scholar affiliated with the Woodrow Wilson School. Daniel Kahneman, a professor of psychology and public affairs, received the award in 2002. Overall, Krugman is the eighth Princeton faculty, staff member or alumnus to be awarded a Nobel in economics.