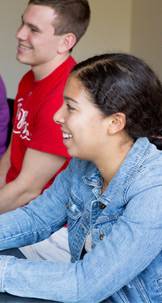 The Princeton University Preparatory Program (PUPP) is a multiyear college preparation program for low-income Princeton-area high school students, and this summer's theme was Nigerian history and culture. Above, teaching assistants Max Skelly (left) and Neely Lewis (right), both members of the University's Class of 2016, lead a group discussion about the film "Half of a Yellow Sun," which focuses on the Biafran War.

On a recent Wednesday morning in July, 70 local high school students immersed themselves in Nigerian history and culture through film, food and discussion on Princeton University's campus.

This event was one of many activities offered to these students this summer as part of the Princeton University Preparatory Program (PUPP). PUPP is a multiyear, tuition-free institute that fosters academic achievement and prepares low-income, high-achieving students from Princeton-area school districts for admission to and success in college.

PUPP students — who the program staff call scholars — enter the competitive program in the summer after their freshman year and participate throughout high school. The program involves summer sessions at the University, weekly after-school enrichment sessions during the academic year and a series of cultural excursions to museums, theaters and shows.

Each summer, PUPP chooses a theme around which classes and activities are structured. The theme this summer is Nigerian history and culture. Students read the award-winning novel "Americanah" by Nigerian author Chimamanda Ngozi Adichie, made presentations on Nigerian history and events, and performed in-depth cultural analyses of the country.

PUPP Director Jason Klugman said immersing students in a new topic each summer is one of many things that sets the program apart.

PUPP teaching assistant Marcus Stroud (far left), a member of the University's Class of 2016, leads a small group discussion focusing on the roles of men and women in the film "Half of a Yellow Sun."

"We really like to have the scholars develop a complete perspective, as well as an understanding and knowledge of a specific area," he said. "For example, last year we focused on Islam and Afghanistan, and scholars learned about Native American culture the year before."

This July day began with a viewing of the film "Half of a Yellow Sun," an adaptation of another novel by Adichie. The movie chronicles the stories of two sisters in and around the Biafran War, a three-year conflict in the late 1960s that resulted in more than one million deaths. After watching the movie, students divided into small groups to discuss its themes and how they relate to "Americanah," and their perspectives on Nigeria and the Biafran War.

One student, Youtee Wheagar of Ewing High School, drew parallels between Adichie's writing and her own life. Wheagar said she relates to the author's message about the dangers of a single story for one group or a "misconception from a story about a nation or people." 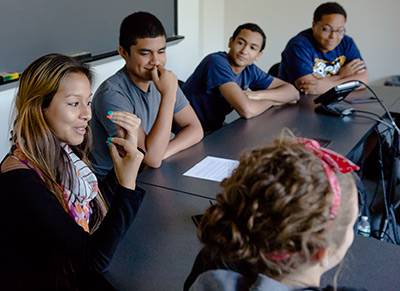 "Since many PUPP scholars were raised in low-income households and some in inner cities, people on the outside may look at us as having a single story," Wheagar said. "People might think that all we do is drugs or cause violence, but that's not the case. We all have unique backgrounds that make us who are. I love how PUPP stresses that we are not single stories, but active individuals with our own voices."

One small group, led by teaching assistant Marcus Stroud, a member of the University's Class of 2016, featured a lively discussion among scholars about the role of men and women in the film.

Because he was a teenager who grew up in a low-income, single-mother household, working with PUPP resonates with Stroud.

"I want to give scholars some wisdom and encouragement and just be a familiar voice to them. I want to show them that I went through the same thing they're going through, but look how everything turned out," Stroud said. "I really wish I had a program like this growing up."

Akabashorun said it was enlightening to have an open discussion with her peers about how other people view Nigeria. 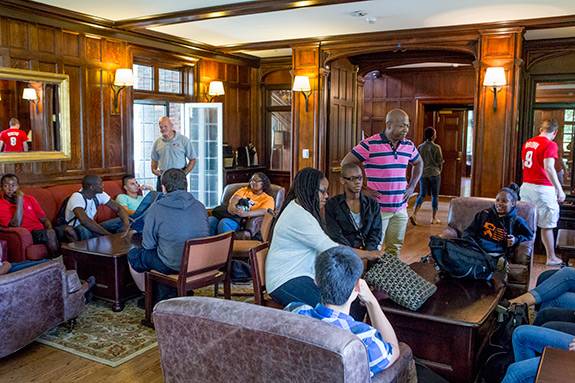 PUPP students and teachers chat at the University's Campus Club before a lunch of Nigerian cuisine.

"There's a stereotype of Nigeria that it's poverty-ridden or uncivilized, but seeing people come up and thank us for sharing our culture made me very happy," Akabashorun said. "I really appreciate my peers trying new things with an open mind and not having any biases."

For many students, PUPP offers access to resources, such as college counseling, that they might normally not have access to. Anthony Hernandez of Nottingham High School said that because some participants are first-generation citizens, their parents don't necessarily understand the college process.

"With our backgrounds, you don't always see that level of guidance or direction like we get in PUPP," Hernandez said. "Before I started the program, with the exception of a family visit to Puerto Rico, I had never been outside New Jersey. But in the program, they've taken us to New York and Pennsylvania to visit colleges and universities and to experience culture. For example, this year we visited the Brooklyn Museum and toured Haverford College and the University of Pennsylvania. Everything we get to experience is great."

In addition to literature, scholars take academic courses such as math, science and writing, as well as classes in yoga, personal development and art. Admission is based on a student's academic record, state exam scores, a writing sample, household income, performance in a small group interview, leadership potential and a commitment to pursuing higher education. 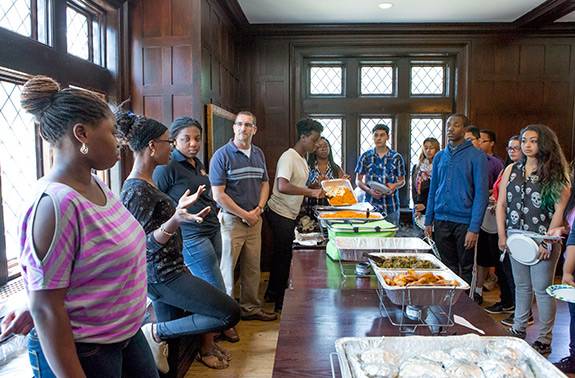 The payoff of the program is clear.

With more than 220 alumni, PUPP has seen scholars attend and graduate from selective colleges and universities across the country, including Princeton, Columbia University, Amherst College, Occidental College, the University of Richmond and Wesleyan University. More than 90 percent of PUPP alumni have continued to college, either completing a degree in four to six years or currently being in good standing at their college or university.

Among PUPP's first six cohorts, 72 percent have earned a college degree, compared with a national average of 55 percent for all college students and less than 10 percent for low-income students. PUPP alumni have also earned advanced degrees in medicine, law, education, public policy and international affairs. 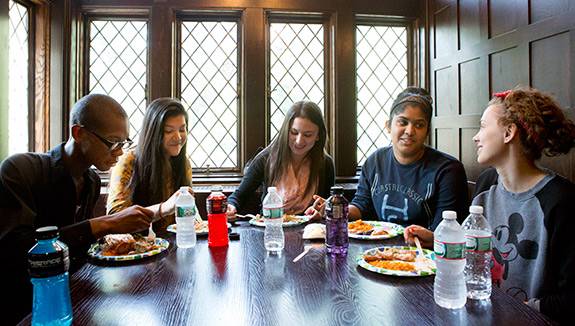 Started in 2000 by Miguel Centeno, the Musgrave Professor of Sociology and professor of sociology and international affairs in the Woodrow Wilson School of Public and International Affairs, and John Webb, former director of Princeton's Program in Teacher Preparation, the program launched a year later with a full cohort of students. Centeno said he thinks of PUPP as a mechanism for expanding the choices available to all students.

"I think over and above the training that we provide over the three summers and the school year program, the most important thing is that we make the students aware of a whole different world that exists if they choose to move into it," said Centeno, who is also the chair of the University's sociology department. "We then give them the tools and support needed to make it into that world."

Looking at the how the program has grown since he took over 10 years ago, Klugman said it's an incredible experience to see students, challenged by so much in their lives, come into the program as rising sophomores and leave as high school graduates ready to attend competitive colleges and universities.

"It's remarkable to see scholars' 'aha' moment, either in a summer institute math course or on a tour of a prestigious college," Klugman said. "It is particularly gratifying to have PUPP alumni come up to me, years after their official time as PUPP scholars has ended, and say that they now realize, understand and appreciate the impact the PUPP experience had in shaping their collegiate careers and professional goals."