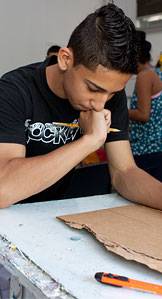 The Princeton University Preparatory Program, also known as PUPP, offers a six-week summer institute on the Princeton campus that includes academic coursework, homework and field trips to help equip local high school students for college. This year, Haiti served as the focus of the PUPP classes in art, literature and science. Here, Simon Lopez, a rising sophomore at Trenton Central High School, works with cardboard as he creates a Haitian prayer flag for his art class. 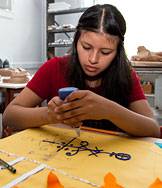 Paint is one of the many materials Dennisse Calle, a rising senior at Trenton Central High School-West, uses as she constructs her Haitian prayer flag.

On a recent summer day, a group of high school students manipulated black soil in their hands to simulate landslides, while others worked with fabric and paint to construct mythological figures with colorful histories.

For the 72 students enrolled in the Princeton University Preparatory Program, all of their imaginations were inspired by the island nation of Haiti, which served as the focus for their hands-on learning on the Princeton campus. 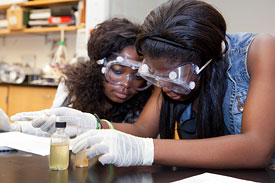 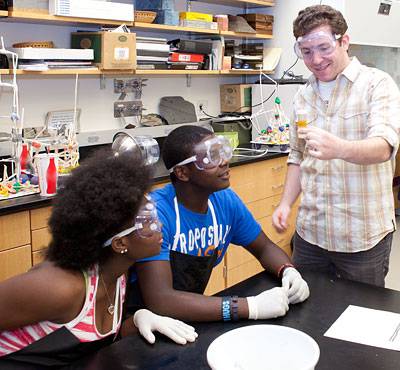 Sean Hammer (far right) -- a science teacher with PUPP and at Ewing High School, who graduated from Princeton in 2008 with a certificate in teacher preparation -- assists rising seniors Kaja Nelson (left) and Sean McJunkins (center) with their lab exercise.

This year's focus on Haiti was woven deeply into art, literature and science courses. In literature, students read works by Haitian-American writers including Edwidge Danticat; in art, students worked on prayer flags, or voodoo flags, featuring mythological Haitian gods; and in science, students studied natural disasters' effects on ecosystems, such as Haiti's 2010 earthquake and the island's history of landslides due to deforestation.

"The scholars are genuinely happy and enjoying the work," said Jason Klugman, director of the program, which is administered by the Program in Teacher Preparation. "We have a great mix of new and veteran faculty, and a new set of teaching assistants -- all of whom are dedicated to the work of providing PUPP scholars with an engaging and challenging summer academic program." 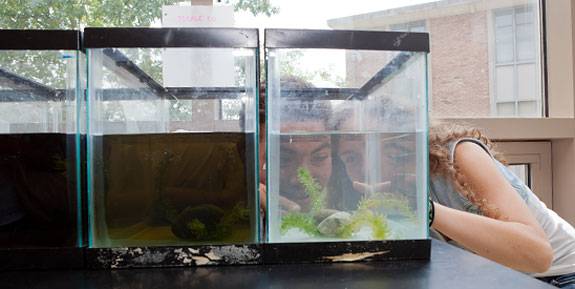 On one recent afternoon, groups of seniors were wrapping up a two-day experiment examining oil's effect on water quality, as part of a lesson on how oil spills affect the environment. In a laboratory in Guyot Hall, they used pipettes to add different quantities of oil to water, then wrote reports on how the oil changed the water's appearance and chemical properties.

"You learn in a different way" in PUPP, said Jayah Feliciano, a rising senior at Trenton Central High School. She noted how the experiments are conducted within the context of the class and are related to other subjects.

Two instructors -- physics teacher Alison Miller and biology teacher Sean Hammer -- moved around the room answering questions and offering advice. Miller, a physics teacher at South Brunswick High School, said previous exercises during the program, such as constructing levees and earthquake-resistant buildings, relied on her expertise, while others with a focus on biology were an opportunity for her to learn something new.

"It's a nice meshing of the two subjects," Miller said. "In reality a natural disaster touches so many areas of science." 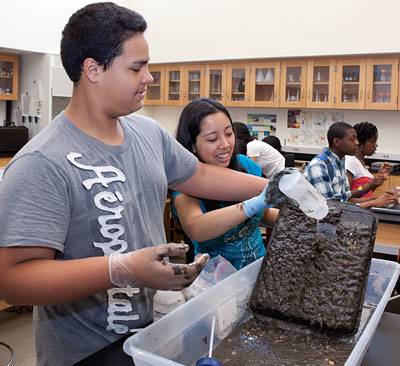 In a classroom down the hall, groups of rising sophomores tried to replicate a landslide with trays of dirt, some of which were seeded with plants. The project was a culmination of the students' classes up to that point.

"We're seeing if vegetation prevents a landslide," said Jeremy Whaley, a rising sophomore at Ewing High School. "The labs at school are typically one day. This one is building on knowledge. At the beginning of the summer, we were out collecting samples, and then we were working on hypotheses and methods in class. This project combines them."

Teaching assistant Yemi Olorunnipa, a rising senior and sociology major at Princeton, said working with PUPP has furthered his interest in education.

"I've really enjoyed it, and it's a great resource for kids," he said. "After class, I'm editing papers, and the students text or email me with questions. Being in the classroom has inspired me and motivated me to want to teach." 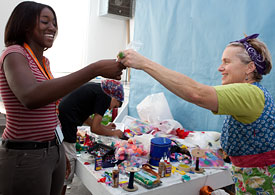 Maria Evans (right), an arts instructor for PUPP and the community arts manager at the Arts Council of Princeton, helps Angela Amankwaah, a rising sophomore at Ewing High School, select beads for her Haitian prayer flag. The program emphasizes hands-on activities, as well as teamwork.

Earlier that day in art class, sophomores and seniors worked in pairs on their prayer flags. Their instructor, Maria Evans, the community arts manager at the Arts Council of Princeton, said that after Haiti's earthquake last year, artists shifted from using expensive beading and sequins to using litter such as bottle caps to make prayer flags, due to the shortage of materials.

Evans provided colorful scraps of fabric, ribbon, beads and other craft supplies and asked students to select a deity, and the students researched the gods to create a concept for their flags.

"The flag should be clear -- who it's about and what is happening. It should tell a good story," she said. "It's also a great way to learn about different materials -- what the material can and can't do. The students work in teams and learn each other's strengths and how to divide the work."

Samuel Williams, a rising senior at Ewing High School, glued fabric onto a flag featuring a family of water gods named Simbi. On his flag, three serpent-like creatures had begun to emerge on a sea of navy blue cloth.

"We're using our creativity because we interpret what we learn about the gods, while keeping true to what we're learning," he said.

Williams said participating in PUPP for three years has made a big impact on him. "What I learned helps me during the school year, and PUPP gives you the competitive edge you need to prepare for college" through teaching skills such as organization and college essay writing, he said. He added, "I cherish the friends I've made in the program, people I can rely on. I didn't have that before."

In the foreground, PUPP students Diana Gomez (left) and Daniel Cox (right) work on a Haitian prayer flag featuring the god Ti Jean Quinto, while Samuel Williams (back left) and Antoinette Chavis (back right) look on.

Throughout the summer, the students also took classes in math, writing and college preparation, which consisted of personal development, SAT prep and college admissions, depending on the student's grade level. In addition, students visited colleges and museums in New York City and Philadelphia.

Klugman said the program has established credibility with the students because of the many alumni who have gone on to attend college at universities across the country, including Princeton, with a nearly 70 percent completion rate.

"We try to tell them this is hard. We're going to expect you to work hard, to struggle, but we know what the results can be," Klugman said. "After 10 years, we are confident that if you go on this journey with us, the opportunities are boundless on the other end."