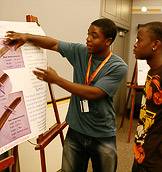 Students in the Princeton University Preparatory Program, which provides academic and cultural enrichment for high-achieving, low-income students from high schools in Ewing, Princeton and Trenton, concluded their six-week summer session with a research symposium. The forum, held Aug. 14, was an opportunity for students to showcase their work to each other and to practice their public speaking skills.

High school student Manna Selassie stood before a poster that bore the words "Arabs on the Silver Screen." She had decorated it with cartoon depictions of Arabs, a list of 17 movies she had studied and quotes from some of the Arab American students she had interviewed for her research project about the depiction of Arabs in film and other mediums.

"Many people get their information about the outside world from the media, and a lot of media portray Arabs negatively," said Selassie, who will be a junior next year at Trenton Central High School.

Selassie is one of 65 students participating in the Princeton University Preparatory Program (PUPP), which concluded six weeks of summer classes, lectures and field trips with a research symposium on Aug. 14 where students presented projects in biology, physics/engineering and the social sciences. For Selassie and others, it was an opportunity to showcase their work to each other and to practice their public speaking skills.

"I've learned a lot about tolerance and other people's views and perceptions" doing this project, said Selassie, who produced an annotated bibliography and an outline and then wrote "the longest research paper I've ever done." The program's instructors "give you confidence that you can speak in front of people," she said. "They make you think everything is achievable." 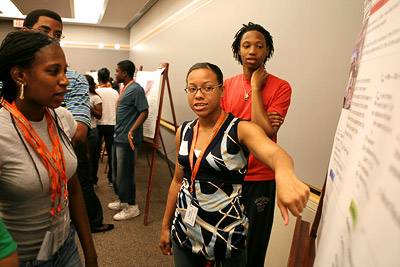 Students presented projects in biology, physics/engineering and the social sciences at the symposium.

A few yards away, Princeton High School student Leslie Castrejon presented the results of her experiment, which examined how a fish's respiration rate changed when the water temperature was raised or lowered. All around her in the Frist Multipurpose Room students were asking each other about their projects.

"How did you know how many respirations the goldfish did?" inquired Zendy Deleon, a student at Trenton Central High School.


"Did you have a control group?" asked Sade Williams, who goes to Ewing High School.

Now in its eighth year, the program provides academic and cultural enrichment for high-achieving, low-income students from high schools in Ewing, Princeton and Trenton. Participants, who attend the summer institute for three years and receive academic and cultural enrichment during the school year, are prepared for admission to and success at selective colleges and universities. This summer the students took a biology course that featured a new unit in forensic science, constructed a roller coaster to study kinetic energy and attended guest lectures by Princeton professors Miguel Centeno, Angel Harris and Tera Hunter.

"We're getting a lot of preparation we wouldn't normally get," Williams said. "I'm getting exposed to professors, and I'm asking them questions. Once I get to college, I'll know how to interact with professors." 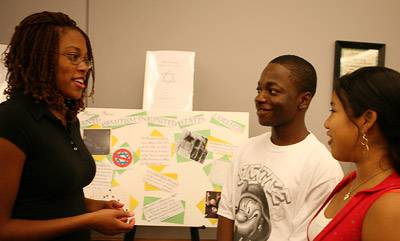 Jasmine Evans (left), a member of Princeton's class of 2010 who served as a teaching assistant in the program, talked to two students at the research symposium. Evans was inspired by the students, she said. "They are so willing to step up and be challenged."

"These presentation skills will help so much with interviewing and the college process," said Amber Wedges, a member of Princeton's class of 2008 who spent the summer as a teaching assistant in the program.

Tim Prugar, a member of Princeton's class of 2006 who taught a social science class, said the final projects helped students understand both sides of an issue.

"They picked some hot-button issues, but this wasn't just sitting around the table talking with their friends. They had to back up their opinions with information," Prugar said. When research contradicted their preconceived notions, the students told him that their opinions had been changed, he said.

Serving as a teaching assistant in the program this summer gave Jasmine Evans, a member of Princeton's class of 2010, a new perspective on the teaching career she plans to pursue after finishing college.

"I worked one-on-one with the students in physics, and it was exciting," she said. "I learned a lot about how to teach students at different levels." Above all, she was inspired by the students, she said. "They are so willing to step up and be challenged."

Wedges, Prugar and Evans are affiliated with the University's Program in Teacher Preparation, which administers PUPP and offers Princeton students the opportunity to earn their New Jersey state teaching certificate.

Jason Klugman (standing at right), the program's director, introduced a series of presentations by students at the research symposium. Now in its eighth year, the program also provides academic enrichment during the school year.