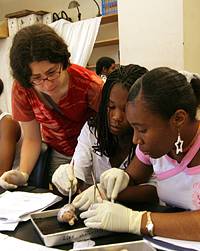 From left, Teresa Leonardo, a researcher in Princeton's Department of Ecology and Evolutionary Biology, assists sophomores Shantae Gordon from Ewing High School and Karla Bagley from Trenton Central High School during a biology session in which students compared the brains of a sheep and a dogfish shark. (photo: John Jameson)

From left, Teresa Leonardo, a researcher in Princeton's Department of Ecology and Evolutionary Biology, assists sophomores Shantae Gordon from Ewing High School and Karla Bagley from Trenton Central High School during a biology session in which students compared the brains of a sheep and a dogfish shark. (photo: John Jameson)

From intensive lab work to SAT training to a tour of the United Nations, students in the Princeton University Preparation Program (PUPP) are on an excursion of learning that will help lead them to a college education.

The program currently enrolls 59 high school students from Princeton, Trenton and Ewing who are academically talented and come from disadvantaged backgrounds. Over the course of three years, the students participate in academic exercises to develop skills and experiences needed to successfully apply to selective colleges and universities.

Now in its fifth year, PUPP is administered by the University's Program in Teacher Preparation. Graduates of the program are attending colleges and universities around the country, including Princeton, Columbia, Rice, Vassar, North Carolina-Chapel Hill, George Washington and Rutgers.

"I'm in the program because it helps with my education and builds a stronger future," said Frances Nova, a first-year PUPP student who will be a sophomore at Trenton Central High School.

Marquis Stone, a classmate at Trenton Central, added, "It helps you pick a direction and get better prepared." 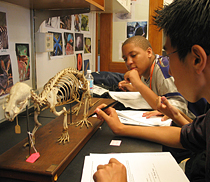 Both Nova and Stone said they are most interested in studying math but they particularly enjoy their literature course, in which students are performing scenes from James Baldwin's "Go Tell it on the Mountain" and William Shakespeare's "The Tempest."

This year's offerings include a stronger science component, enabling the students to spend more time in laboratories and on fieldwork, said program coordinator Jason Klugman.

"There are a lot of summer programs that emphasize only one subject area, like math, performing arts, writing or leadership development. We try to take the best of all of those subjects, and now we rounded out the academic experience with the addition of a significant hands-on science component including biology, electrical engineering and physics," Klugman said.

At a recent session in Guyot Hall led by Cassandra Nuñez and Teresa Leonardo, postdoctoral researchers in ecology and evolutionary biology, 24 rising sophomores dissected sheep brains and compared their structures to those of dogfish sharks. Nuñez and Leonardo, joined by three Princeton undergraduate teaching assistants, helped the students identify sections of the brains that offered clues about the differences in how the animals lived -- noting, for example, that the sheep's brain has a more developed visual system.

"This lab is used for upper-level college students, so we really challenged them in terms of reading the material and executing the directions," Nuñez said. "They ask very good questions in terms of the ideas and concepts we're trying to teach them."

Karla Bagley, who attends Trenton Central and hopes to become a forensic scientist, was engrossed in the experiment. "This is my first time taking biology, which we're supposed to take in 10th grade, so this is a preview of what we might do," she said.

Brendan Williams, a rising Princeton senior and one of the PUPP teaching assistants, noted, "Compared to their high school courses, this is a lot more hands-on."

Students in the biology course have collected water and soil samples from Lake Carnegie and extracted DNA samples from organisms found in the soil. They also studied skeletons of a variety of animals -- including anteaters, goats, cats, turtles and flying squirrels -- to see how their bone structures might be related and learn how the animals move.

"We're focused on critical thinking and teaching them how scientists think about problems," said Leonardo. "They really love doing the labs, and they have enjoyed getting dirty and touching all the things in nature. Everyone has been really excited and enthusiastic."

An exhibition of the students' science projects will be held from 1 to 3 p.m. Wednesday, Aug. 10, in the Frist Campus Center Multipurpose Room. The closing ceremony is scheduled for 7 p.m. Thursday, Aug. 11, in Taplin Auditorium, Fine Hall. Both events are open to the public.