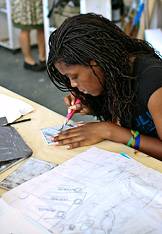 Larissa Guillaume, a rising sophomore at Nottingham High School in Hamilton, works on a project in art class during the Princeton University Preparatory Program summer institute. The summer program includes intensive coursework and other activities intended to help area high school students enhance their academic skills in preparation for applying to college.

The photographs on this page were taken by Ivona Kaczmarek, a former resident of Ewing, N.J., who was enrolled in the Princeton University Preparatory Program from 2000 to 2004. She graduated from West Virginia University in 2008 and currently is pursuing a career as a photographer in the Pittsburgh area.

For local high school students who aspire to higher education, the Princeton campus this summer served as a launching pad toward their goal of attending college. 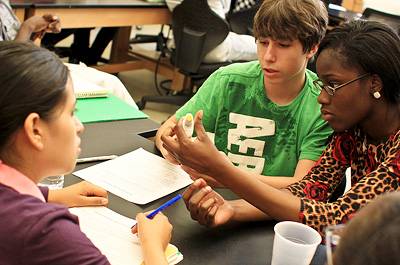 From left, rising sophomores Dennisse Calle of Trenton Central High School and Dan Cox and Tamara Frater of Ewing High School prepare for an exercise using a micropipette during biology class, which focused this summer on the study of infectious disease.

"We had a very successful summer," said Jason Klugman, director of the program, which is administered by the University's Program in Teacher Preparation. "In addition to our outstanding faculty, we had a great group of teaching assistants who helped us manage the program quite well." Nine Princeton undergraduates served as teaching assistants, aided by teaching assistant liaison David Ponton, who graduated from Princeton this spring and will teach social studies at Ewing High School this fall.

"The PUPP scholars were challenged in the classroom from day one, and demonstrated the grit and determination it takes to be successful in a collegiate setting," Klugman said.

During the summer institute, which concluded earlier this month, students took courses in art, writing, literature, math, physics, biology, social science and college-preparation skills. They also participated in activities such as yoga, capoeira, salsa dancing and singing. At the end of the session, students presented the results of their academic work at a research symposium intended to help them hone their public-speaking skills. 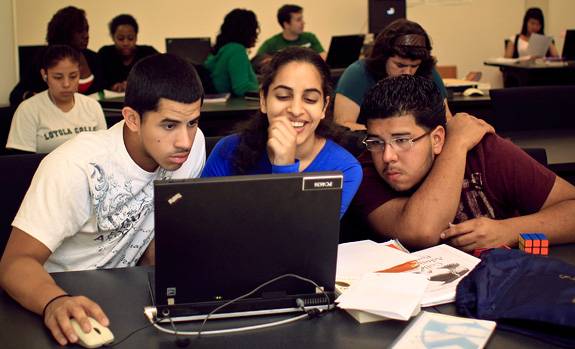 Sean Hammer, a 2008 Princeton graduate who teaches biology at Ewing High School, led the biology course for rising PUPP sophomores along with Trenton Central High School teacher Mary Courtney. "PUPP achieves its goal of fostering a sense of community among students, faculty, TAs and the administrators," he said. "To be a part of a program where everyone is so highly invested in the success of these students is truly something special."

Hammer said a highlight of the summer was conducting unusual fieldwork with students in the biology course, which focused on infectious disease. The PUPP students donned protective clothing and collected ticks from three areas near campus to study the prevalence of Lyme disease in the Princeton community. 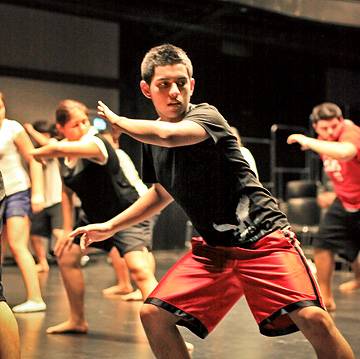 Eddson Donado, a rising junior at Trenton Central High School, joins in a session of capoeira, a combination of acrobatics, music, martial arts and dance. The summer program balanced intensive coursework with activities such as capoeira, yoga, dancing and singing.

"We were able to provide students with the opportunity to not only perform original research but research of real value to the local community, and it was an experience that should serve them well in their future science courses. More importantly, it was memorable -- these kids will never forget the time they went out into the woods and actually tried to catch ticks!" he said.

The students also took advantage of other opportunities off campus, beginning with a leadership retreat at the Princeton-Blairstown Center. Later in the summer, a tour of Spanish Harlem in New York City allowed them to experience the heritage and culture that they explored while focusing on Latin American literature and immigration in their coursework. They also visited the Franklin Institute science center in Philadelphia.

In addition to becoming familiar with Princeton's campus, the group took tours of Lafayette and Muhlenberg colleges in Pennsylvania, while the rising seniors also visited Drew University and the Stevens Institute of Technology. Muhlenberg and Stevens are among the many colleges and universities around the country where members of the PUPP class of 2009 will continue their studies. Others include Princeton, Columbia University, New York University, Wake Forest University, Kenyon College, Franklin and Marshall College and Wesleyan University.

"One of the greatest strengths of PUPP is that the summer institute provides academic and social experiences that truly challenge the students," Hammer said. "They need to adjust to the rigor of the summer institute, the level of independent thinking and the work ethic that is now expected of them, and to the experience of being surrounded by other, equally-bright individuals. PUPP is a lot like college in that sense -- the students come into a new academic and social environment that challenges them in ways they have not previously been challenged and provides an opportunity for them to find the answers to some very important questions about their own abilities, goals and priorities." 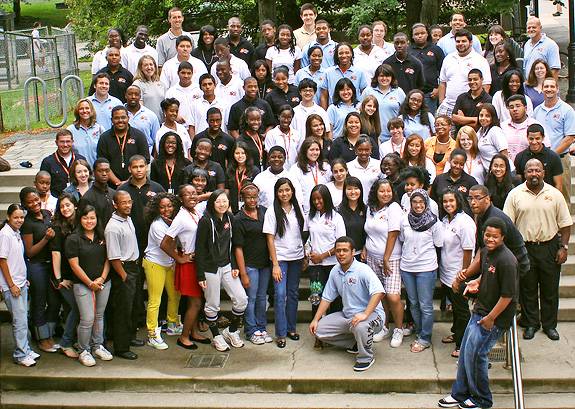 PUPP students are supported by Princeton undergraduate teaching assistants, local educators and staff from the University's Program in Teacher Preparation. "To be a part of a program where everyone is so highly invested in the success of these students is truly something special," said Sean Hammer, a 2008 Princeton alumnus and biology teacher at Ewing High School who taught a PUPP course this summer.