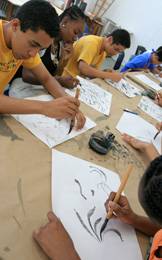 Below left: Emily Aull (left), a member of Princeton's class of 2008 who is interning at the Princeton University Art Museum this summer and assisting in the PUPP art course, helped the students carve linoleum squares used to make seals to decorate their projects.

After touring the Chinese art collection at the Metropolitan Museum of Art and the Asia Society in New York, students in the Princeton University Preparatory Program (PUPP) were ready to create some Asian-inspired works of their own.

On a recent morning, some two dozen students worked diligently in a studio at 185 Nassau St., carving designs into linoleum squares to make seals that would adorn their art projects. The works that the students viewed on their trip to New York typically were decorated with seals representing the artist, an art collector or the government.

"They're making their own seals based on that concept, but they're bringing a lot of their own personalities to them," said Maria Evans, an art teacher from Stuart Country Day School in Princeton, who leads the studio portion of the PUPP art course.

While other students' designs represented their families or personal interests, Tatiana Robinson, a rising senior at Trenton Central High School, created a seal with a pair of theatrical tragicomic masks. For Robinson, the masks represented both the challenge and reward for students involved in PUPP, which enrolls academically talented high school students from disadvantaged backgrounds with the goal of preparing them for college.

Robinson, in her third year of the program, said she advises younger students "that although it's not going to be easy and it's something different, you should still try hard. You never know -- your finished product might be what you really want it to be."

For PUPP, now in its sixth year, the finished product has been impressive. The program includes 67 students this year -- its largest group ever -- from Princeton, Ewing and Trenton public schools. Graduates of the program are attending colleges and universities around the country; the most recent group of graduates will attend universities such as Princeton, Brown, Howard, Lehigh, Rutgers, Texas A&M and Morgan State this fall.

This year's program features a newly expanded art course, which includes studio work in 185 Nassau and art history lessons in the Princeton University Art Museum. After working on their seals, the students learned Chinese scroll painting techniques from local artist Heather Barros. They practiced depicting leaves, branches and blades of grass using brushes made of bamboo and goat fur, which they dipped in ink made from burnt oil.

Emily Aull, a member of Princeton's class of 2008 who is interning at the art museum this summer and assisting in the PUPP art course, said the students didn't know much about Asian art prior to their field trip into New York. "They're really picking things up," Aull said in between helping students carve the designs on their seals. "The visual style is coming into play, which is great."

The art course relates to the program's literature class, which also has an Asian theme. During the six-week program, students also take courses in writing, math, physics, biology and college-preparation skills. In addition, they attend a leadership retreat at the Princeton-Blairstown Center and take cultural excursions throughout the summer.

Besides the expanded art classes, another new element in the program this year is a social science survey course, which includes guest lectures from Princeton faculty members in psychology, sociology, politics, economics and anthropology.

Students enroll in PUPP for three years following their freshman year in high school. Bentrice Jusu, a rising sophomore at Trenton Central, said she applied to the program this year "to gain more experience as I go into the next grade level, so I won't have trouble with anything."

Robinson, in her final summer, said, "The program really prepares you for your coming year in school. You get a leg up and you're able to take advanced classes and honors classes because you already had the review" during the summer.

Evans, the art instructor, is in her third year with PUPP. "It's a great program," she said. "I love progressing with the students, knowing what they've accomplished the year before."