Anyone who has ever had a glass of fizzy soda knows that bubbles can throw tiny particles into the air. But in a finding with wide industrial applications, Princeton researchers have demonstrated that the bursting bubbles push some particles down into the liquid as well.

"It is well known that bursting bubbles produce aerosol droplets, so we were surprised, and fascinated, to discover that when we covered the water with oil, the same process injected tiny oil droplets into the water," said Howard Stone, the Donald R. Dixon '69 and Elizabeth W. Dixon Professor of Mechanical and Aerospace Engineering at Princeton and the lead researcher for the project.

The conclusions provide new insight into the mixture of non-soluble liquids — a process at the center of many fields from drug manufacturing to oil spill cleanups. 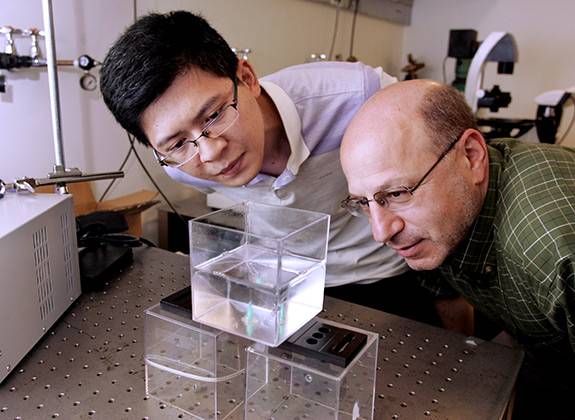 Princeton researchers have discovered that bursting bubbles can push tiny droplets of a surface material down into a base liquid as well as sending them into the air above. The finding has important implications for science and industries that are concerned with mixing liquid solutions. From right, Howard Stone, the Donald R. Dixon '69 and Elizabeth W. Dixon Professor of Mechanical and Aerospace Engineering, and graduate student Jie Feng observe bubbles in a tank. (Photos by Frank Wojciechowski for the Office of Engineering Communications)

In an article published on July 13 in the scholarly journal Nature Physics, the researchers describe how they reached their conclusions after examining bubbles in containers holding water covered by a layer of oil. Using several experimental approaches, they presented a detailed physical description of how the bubbles burst and how that affected the oil and water mix.

"If you look at this system, which has a thin layer of oil over water, the bursting bubbles were dispersing the oil phase in the form of nano-droplets into the water," said Jie Feng, a graduate student in Stone's lab and the lead author of the paper. "Essentially, it is an unrealized form of mass transport related to bubble bursting."

In one observation, the researchers noted that the water in one container changed from clear to translucent after bubbles ran through the mixture for some time. The change in appearance "suggested that small objects had been dispersed in the lower water phase," the researchers wrote. 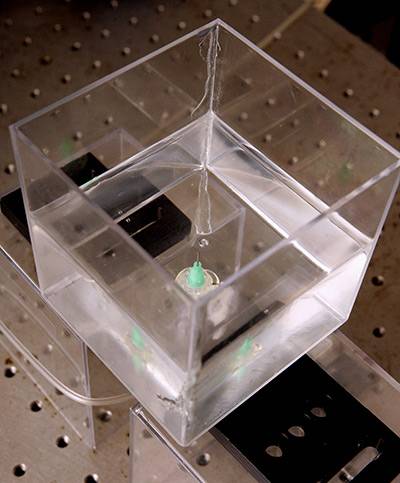 The researchers send bubbles through a tank containing a thin surface of oil above a water bath to make their observations.

To get a better understanding of how this was happening, they used a high-speed camera to break down the steps involved in a bubble's final pop. They found that a bubble's collapse caused a pressure wave just below the bubble; this wave pushed a small amount of liquid out and down, away from the collapsing void.

The researchers also found that the addition of a surfactant, which decreases surface tension, was critical to the formation of the nano-droplets. In fact, they concluded that without a proper amount of surfactant, the droplets would not form.

The nano-droplets are so small they are impossible to see with the naked eye, so the researchers performed further experiments to test their analysis. In one, they spread an extremely thin layer of latex particles over the water and were able to observe the particles moving into the water. They also added a layer of material that is sensitive to ultraviolet light and then used the light to solidify the droplets for observation in the water mixture.

Bubbles' ability to mix liquids offers insights into a number of important systems. During oil spills, for example, it is important to understand how the oil moves from the surface of the water into deeper layers. This has generally been attributed to wave action, but the researchers' findings indicate that even in a flat calm the oil can gradually filter down into the water because of tiny bubbles.

"Bubbles are used to make foams and are part of common gas-liquid processes used in chemical processing," Stone said. "But bubbles also occur in lakes, rivers and oceans because of wave breaking and rain. As a consequence, bubbles can impact many systems."

The researchers said that bubbling also might play a role in a critical system in which organic matter circulates through the ocean. A thin film of material, called the sea surface microlayer, rests at the very top of ocean water. The microlayer contains lipids, proteins and hydrocarbon pollutants.

"Our work suggests that the sea surface microlayer may not only be transported into the atmosphere within aerosol droplets produced by bursting bubbles, but it might also be dispersed into the bulk of the oceans, thus redistributing organic matter into the ecosystem," they wrote.

Feng also said that applying this approach could play an important role in many industrial mixing systems. For one, this manner of bubbling to produce nanoemulsions uses much less energy than traditional mixers, so it is cheaper and more efficient. It also does not require extremely low surface tensions, which some types of industrial processes require. And it provides a good method to mix typically insoluble liquids, such as oil and water.

"This system offers an energy-efficient route to produce nanoparticles, with the potential to increase in scale, for applications in a variety of fields such as drug delivery, food production and materials science," he said.

Besides Stone and Feng, the project researchers included Matthieu Roche and Daniele Vigolo (now research associates in Paris and Zurich, respectively) who worked as postdoctoral researchers in Princeton's Department of Mechanical and Aerospace Engineering; Luben Arnaudov and Simeon Stoyanov, of Unilever Research and Development; and Theodor Gurkov and Gichka Tsutsumanova, of Sofia University, Bulgaria.

Support for the research was provided in part by grant from the Consortium for the Molecular Engineering of Dispersant Systems funded by the BP/Gulf of Mexico Research Initiative, and the European Union's Beyond Everest project.