Invention produces cleaner water with less energy and no filter

The same technology that adds fizz to soda can now be used to remove particles from dirty water. Researchers at Princeton University have found a technique for using carbon dioxide in a low-cost water treatment system that eliminates the need for costly and complex filters.

The system injects CO2 gas into a stream of water as a method of filtering out particles. The gas, which mixes with the water in a system of channels, temporarily changes the water's chemistry. The chemical changes cause the contaminating particles to move to one side of the channel depending on their electrical charge. By taking advantage of this migration, the researchers are able to split the water stream and filter out suspended particles.

"You could potentially use this to clean water from a pond or river that has bacteria and dirt particles," said Sangwoo Shin, an assistant professor of mechanical engineering at the University of Hawaii at Manoa. Shin, the lead author of a paper describing the process, performed the research as a post-doctoral researcher in the laboratory of Howard Stone, the Donald R. Dixon '69 and Elizabeth W. Dixon Professor of Mechanical and Aerospace Engineering at Princeton. 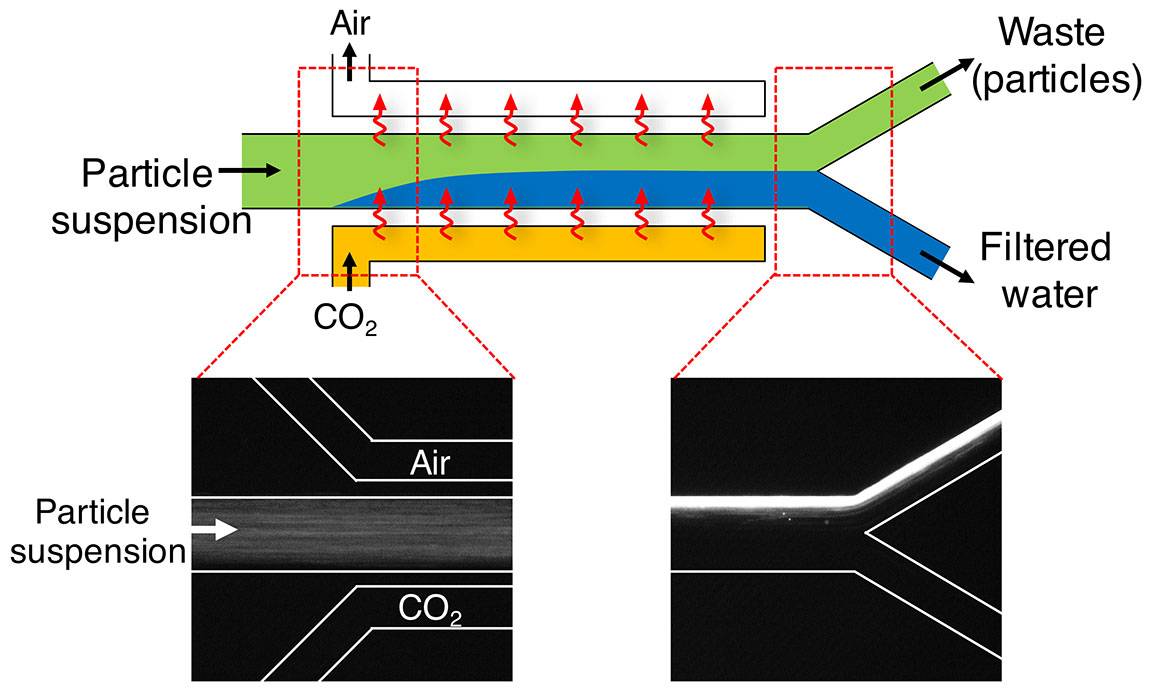 Researchers at Princeton University have found a way to clean particles from water by injecting carbon dioxide into a water channel. The gas changes the water's chemistry, which causes particles to move to one side of the water depending on their chemical charge. By taking advantage of the motion, the researchers can split the stream of water and filter out suspended particles. (Graphics courtesy of the researchers, Princeton University)

In a paper published May 2 in the journal Nature Communications, the researchers describe how they built a laboratory-scale filter that removed particles three orders of magnitude (1,000-fold) more efficiently than conventional microfiltration systems. The system is low energy, with bottled carbon dioxide as the only moving part (besides the pump responsible for the flow), and has no physical filter or membrane that can clog or require replacement.

Carbon dioxide alters water's chemistry by making it slightly more acidic: the tart taste of carbonic acid is familiar in most sodas, and its absence is a reason for flat soda's unpleasant flavor. In chemical terms, the acidity means that when CO2 dissolves in water it creates charged particles called ions. One of those ions, a positively charged hydrogen atom, moves very quickly through the water solution. Another, a negatively charged bicarbonate molecule, moves more slowly. The ions' movement through the water creates a subtle electric field; this field draws particles in the water — which have either negative or positive charges of their own — toward one side of the water stream.

Because most contaminants have some amount of surface charge, the electric field is an effective way to strain them from water. The researchers' device takes advantage of this electric sorting by drawing the contaminants to one side of the flow and then splitting the water into two channels. One path carries water containing the contaminating particles and the other holds clean water. Because the system does not have a membrane or a mechanical filter, clogging is not a problem.

To maintain the electric field, the researchers needed to keep the ions moving through the water channels. They accomplished this by making the channel walls out of material that is permeable to carbon dioxide, in this case silicone rubber (polydimethylsiloxane). Pressurized carbon dioxide diffuses through one wall of the channel and permeates out the other side. Shin said if the channel is enclosed, designers could capture the carbon dioxide gas for later use. When finished, the dissolved CO2 can be easily removed by exposing the water to the air so that the water contains only normal levels of carbon dioxide; it is not carbonated.

The researchers thought of the technique while examining the motion of colloidal particles in a salt gradient — a term for the interface between bodies of salt and fresh water. In a salt gradient, the difference in chemistry of the two solutions causes pressure on particles. Shin said the researchers were observing the motion of charged particles in the salt water when they realized the phenomenon could be useful as a filter.

Salt — sodium chloride — would not be useful for water purification because the salt would remain in the water after filtration. So the researchers thought to substitute carbon dioxide because it is cheap, not harmful for humans to ingest and as easy to remove from water as opening a can of soda.

The researchers said using a soluble gas as a method of controlling particles in a solution could lead to other industrial or scientific applications beyond water filtration.  "The principles being explored in this research we hope will also be impactful in other research areas," Stone said.

Shin said the CO2 system could be particularly useful in the developing world because it does not require the installation and replacement of filters. The idea may be useful for portable systems. It is also relatively low cost, only requiring a canned source of carbon dioxide to use.

"It is definitely able to scale up to a hundred liters per hour, which meets a practical household standard," Shin said.

Shin is now working on methods to scale the system for possible use in water treatment plants to supply larger communities. He said the basic science works, but further engineering is needed to create a large-scale carbon dioxide filter.

"In Hawaii, we have a fresh water problem," he said. "We hope to scale up the device to help solve it."

Besides Shin and Stone, the researchers include Orest Shardt, who worked on the project as a co-lead author while at Princeton and is now a lecturer at the University of Limerick in Ireland; and Patrick Warren of Unilever. Support for the project was provided in part by Unilever Research, the Natural Sciences and Engineering Research Council of Canada, and the Princeton Environmental Institute.