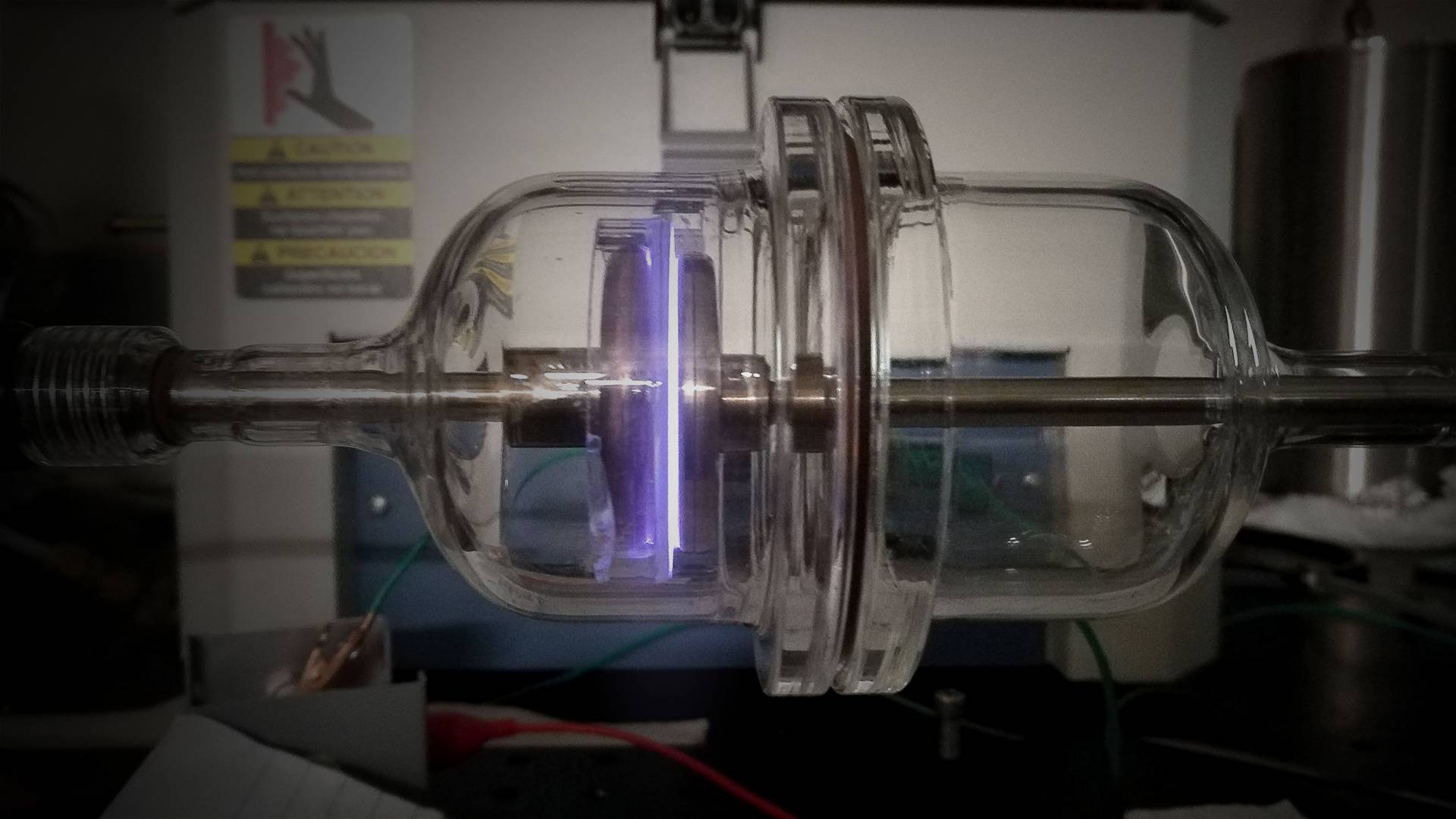 Jen A. Miller for the Office of Engineering Communications

Princeton researchers have developed a method to create lower-cost catalysts for fuel cells and hydrogen fuel production. Researchers used plasma to create new catalysts that are much cheaper than and almost as effective as standard, platinum-group versions.

As anyone who has purchased jewelry can attest, platinum is expensive. That's tough for consumers but also a serious hurdle for a promising source of electricity for vehicles: the hydrogen fuel cell, which relies on platinum.

Now a research team led by Bruce Koel, a professor of chemical and biological engineering at Princeton University, has opened a door to finding far cheaper alternatives. In a paper published April 4 in the journal Nature Communications, the researchers reported that a chemical compound based on hafnium worked about 60% as effectively as platinum-related materials but at about one-fifth the cost.

“We hope to find something that is more abundant and cheaper to catalyze reactions,” said Xiaofang Yang, principal scientist at HiT Nano Inc. and visiting collaborator at Princeton who is working with Koel on the project. 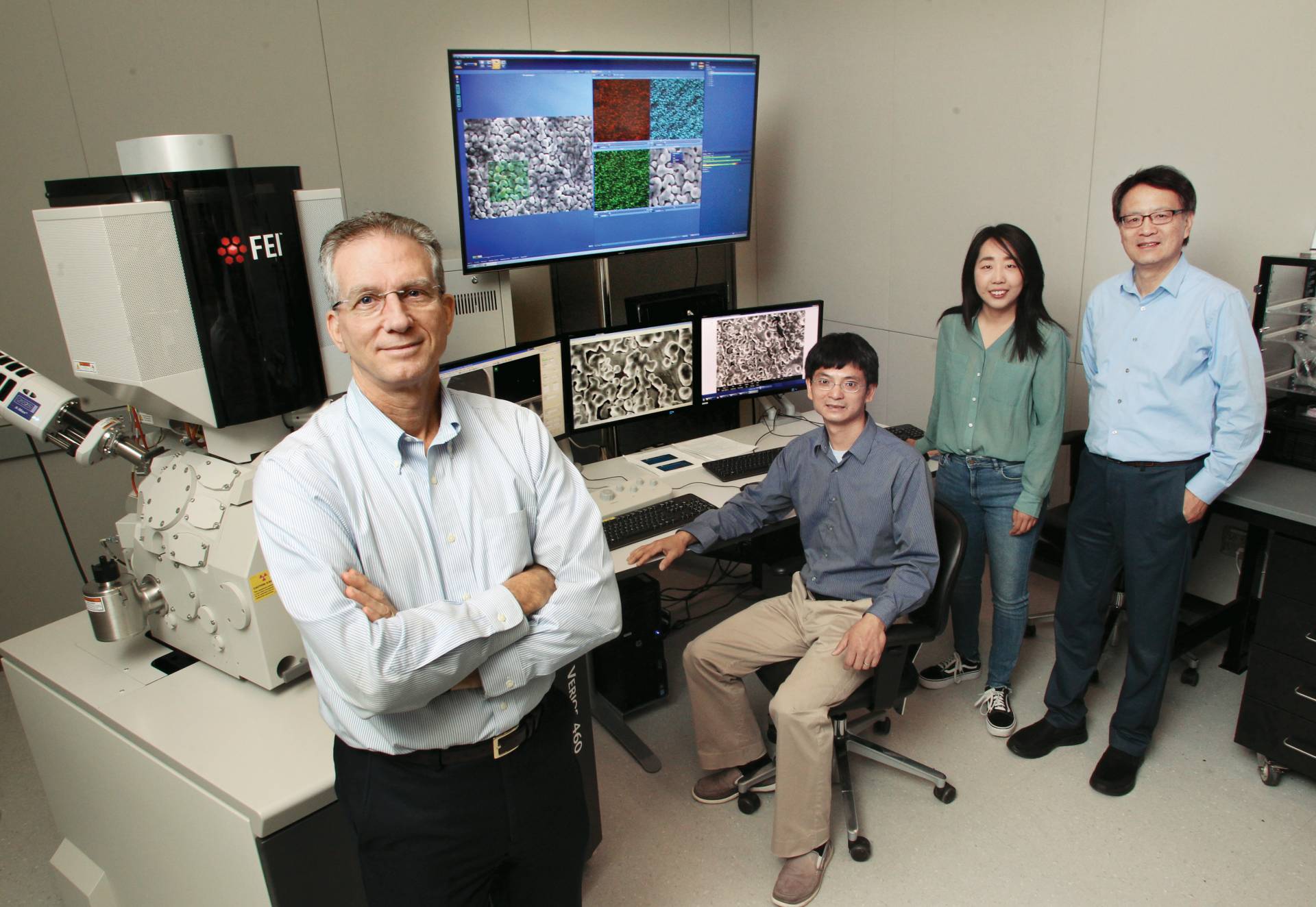 From left, the research team included Bruce Koel, professor of chemical and biological engineering, and co-researchers Xiaofang Yang, a visiting researcher, Fang Zhao, a postdoctoral researcher, and Nan Yao, a senior research scholar and director of the Imaging and Analysis Center at Princeton’s materials institute.

Hydrogen is the simplest and most abundant element not just on this planet, but also in the known universe.

At the most basic level, fuel cells produce electricity by splitting hydrogen into its two components, a proton and an electron. The protons flow through a membrane and combine with oxygen to form water. The negatively charged electrons flow toward a positively charged pole in the fuel cell. This flow of electrons is the current that the fuel cell generates, which can power engines or other electrical devices. This splitting requires a material such as platinum to catalyze the reaction.

Catalysts are also used in reactions that create the hydrogen gas that serves as fuel for the fuel cell. In the most desirable, fossil-fuel independent case, renewable electrical energy can be used to split water molecules (two hydrogen atoms and one oxygen) in the presence of a catalyst. The reaction splits the water into oxygen and hydrogen gases. The more efficient the catalyst, the less energy is needed to split the water.

Right now, the best catalysts for both reactions are platinum group metals. The researchers don’t think that will change because “platinum is almost perfect,” Koel said. With platinum group metals, the electrochemical reactions to draw out the hydrogen are quick and efficient, plus the metals can stand up to the harsh acidic conditions currently required for such reactions.

The problem, though, is that the platinum is rare and costly. “You can’t really imagine replacing the transportation infrastructure with fuel cells based on platinum,” Koel said. “It’s too rare and too expensive to use at that scale.”

For such applications, platinum’s perfection may not be needed. One good-enough substitute, the researchers found, is hafnium oxyhydroxide that has been treated with a nitrogen plasma (plasma is an ionized gas and is a state of matter found in fluorescent lights and the sun) to incorporate nitrogen atoms into the material.

Previously, many materials have been overlooked for electrochemistry applications because they are non-conducting. However, the researchers found that processing hafnium oxide with the nitrogen plasma forms a thin film of material that functions as a highly active catalyst that also survives in strong acid conditions.

While this hafnium-based film is only about two-thirds as effective as platinum, hafnium is far cheaper than platinum. The researchers plan to test zirconium, which is even cheaper, next.

Although they could be useful in fuel cells, Yang and Koel believe that the biggest prospect for these kinds of materials are in systems that use a catalyst to electrochemically split water to produce hydrogen for use as fuel.

“The future renewable economy heavily depends on how we can efficiently split water to generate hydrogen,” Yang said. “This step is pretty important.”

But Yang and Koel emphasize that their discovery isn’t going to lead to a rush of new affordable technologies just yet — or even in the near future. Right now, the procedure to create the material is complex and confined to the lab. While they’ve confirmed the performance of the film, one always has to consider the engineering required for making it practically on a large scale. Instead, this discovery is opening the door to further exploration of materials that may be able to replace platinum.

“We still don’t understand why this particular material is so special, but we’re confident about the properties that we’ve measured,” Koel said. “The material is complicated, so we have a lot of work to do.”

Besides Koel and Yang, the paper’s authors include: co-lead author Fang Zhao, a postdoctoral researcher in physics at Princeton; Yiguang Ju, a professor of mechanical and aerospace engineering at Princeton; Christopher Tully, a professor of physics at Princeton; Rachel Selinsky, an associate research scholar, and Zhu Chen, a  former graduate student in chemical and biological engineering at Princeton who is now a postdoctoral researcher at Northwestern University; and Nan Yao and Yao-Wen Yeh, researchers at the Princeton Institute for Science and Technology of Materials. Support for the project was provided in part by the National Science Foundation, the Simons Foundation, the John Templeton Foundation and the Princeton Center for Complex Materials.