Katie Kennedy traveled to the Himalayas to study 250-year-old bridges made from living tree roots. Hans Hanley built a tool to close a loophole in online privacy. Meagan Yeh evaluated material for possible use in a fusion reactor.

For Princeton undergraduates, the senior thesis is a chance to pursue original research or creative work on a topic of their own choosing. All students earning bachelor’s degrees complete independent projects. Faculty advisers serve as guides for students as they learn to apply their knowledge in new ways. Below are descriptions of projects by seniors in the engineering school's six departments.

“The independent thinking was a great way to round out my time at Princeton,” said Kennedy, a civil and environmental engineering major who graduated June 5. She added that she found it rewarding “to lead a project on my own and think through the entire process of what questions I wanted to answer and how to answer them.” 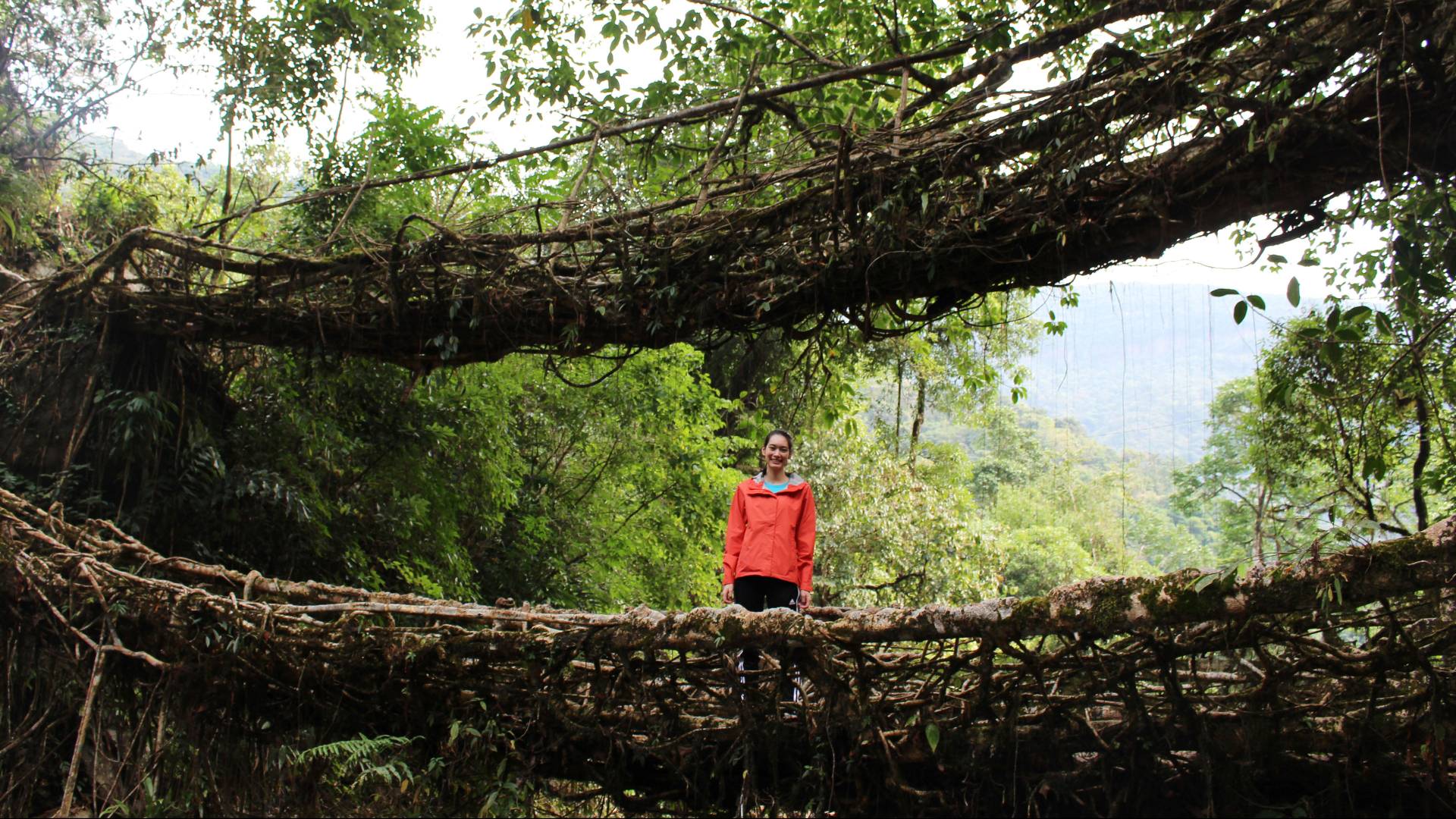 For her senior thesis, Katie Kennedy, a civil and environmental engineering major, traveled to northeastern India to study living bridges, which are grown from aerial roots of the Indian rubber tree.

Kennedy first learned about living root bridges from Sanjeev Shankar, an architect who lectured at Princeton about his work documenting and preserving the structures. She was captivated by the long tradition of these sustainable spans, which are unique to Meghalaya, India. Grown from aerial roots of the Indian rubber tree on frames built of small palm-tree trunks, the bridges can span rivers tens of meters wide. They grow stronger and safer over time, and are remarkably resilient to the region’s monsoons.

Kennedy worked with Branko Glišić, an associate professor of civil and environmental engineering, to analyze the bridges’ growth process, material properties and structural capabilities. Glišić said Kennedy’s thesis is an important contribution toward understanding the bridges’ engineering. “It creates a foundation for future research and opens many questions that no one thought about before,” he said. Also advising Kennedy on the project were Professor Maria Garlock and Assistant Professor Maurizio Chiaramonte, both of civil and environmental engineering; and Shankar, who is based in Bangalore, India.

Living root bridges are at risk from misuse by tourists, lack of maintenance and replacement with concrete. To help ensure the bridges remain a practical option in a modernizing world, Kennedy explored possibilities for refining their structures and speeding their productive growth — the bridges typically take about 30 to 40 years to become usable. She said she hopes these studies can advance the broader field of sustainable architecture through a new understanding of the structures’ “natural intelligence.” 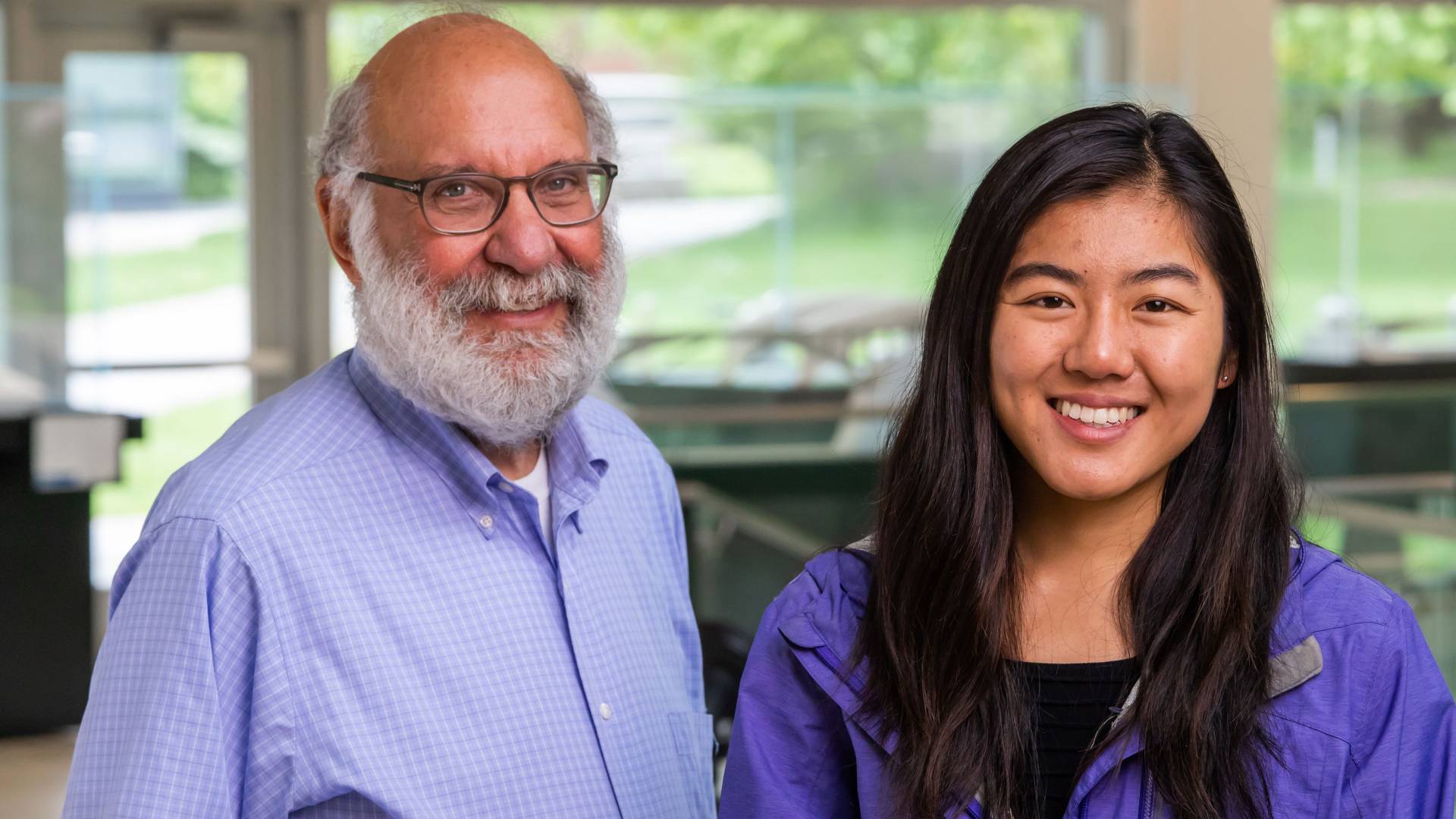 A 2016 internship sponsored by the Princeton Environmental Institute showed Lindy Zeng the power of applying computer science to environmental problems; she used computer vision and machine learning to gather data on African agriculture from satellite imagery.

Zeng, who graduated with an A.B. in computer science along with a certificate in environmental studies, pursued further independent work analyzing satellite imagery — including a project helping a governmental conservation program plan patrols of the Philippine rainforest to protect biodiversity. Toward the end of her junior year, Zeng was inspired by a competition she found on Kaggle, an online platform that hosts contests for machine-learning models using provided data sets.

Zeng worked with Professor David Dobkin to use a Kaggle data set for her senior thesis project. Using satellite images of the Amazon rainforest, she developed methods to identify features such as rivers and roads, and to track land use patterns leading to forest loss.

Dobkin, Princeton’s Phillip Y. Goldman ’86 Professor in Computer Science, praised Zeng’s creativity and persistence in continuing to tweak her algorithms to achieve higher accuracy scores. He said they had many conversations about using remote-sensing approaches to extract more information from the images — for example, by removing cloud cover.

Zeng said the work was a valuable way to combine her interests. “I think it’s really important to apply novel research ideas to other domains — to show a larger audience what computer science can do to improve their fields,” she said. 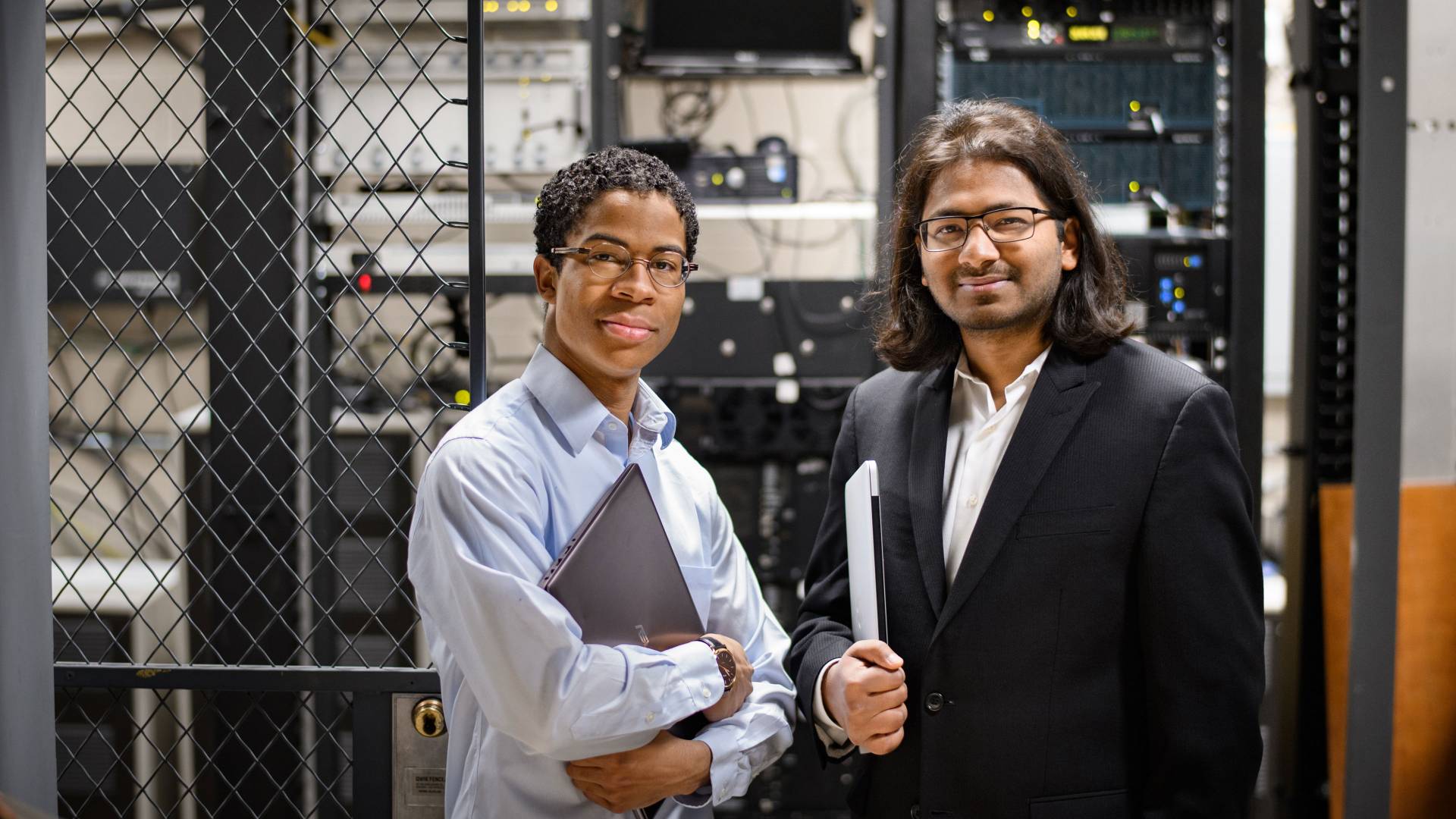 The sheer scope of the 2013 revelations about government surveillance sparked an intellectual fire in Hans Hanley, who graduated with a degree in electrical engineering. “At the time, the fact that any organization was collecting that much information about people was chilling,” said Hanley, who came to Princeton already interested in cybersecurity.

What he didn’t know is that before graduation, he would find himself at the cutting edge of online privacy. Working with Prateek Mittal, an assistant professor of electrical engineering, Hanley identified a new method for improving security within Tor, a web browser designed to provide anonymity to users. His research borrowed from a theoretical framework used in databases, known as differential privacy, and applied that framework to a known problem in the Tor browser’s relay system — the very mechanism that allows users to remain anonymous. Hanley’s approach essentially creates a layer of digital noise that would obscure any information leaks within Tor.

“One thing that working on Tor has taught me is that there are many different tradeoffs that you must take into account when designing a system,” he said. “As an engineer, it is all about finding the best tradeoffs and picking a point along that optimization that you think is best and can help the people using your system the most.”

This year, Hanley was one of three recipients of Princeton’s Daniel M. Sachs Class of 1960 Graduating Scholarship. As a Sachs Scholar at the University of Oxford, he will pursue two master’s degrees, one in computer science and one in mathematics and foundations of computer science. Hanley plans to continue researching privacy, security and information theory; he has also received a National Science Foundation Graduate Research Fellowship for doctoral work at Stanford University. 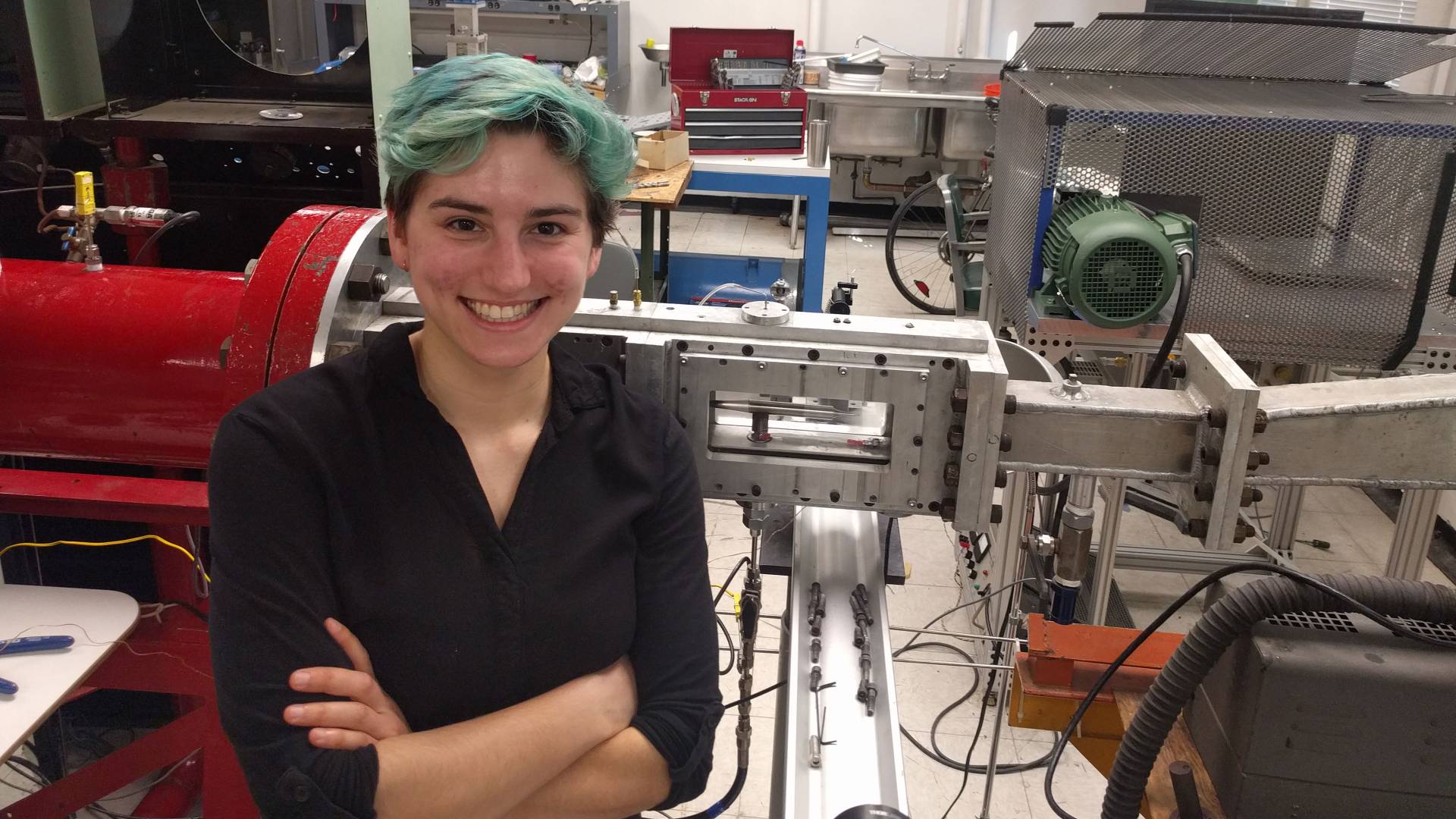 Isabel Cleff’s senior thesis on rocket design stemmed from a fierce fascination with flight. Earning a pilot’s license in high school was “the driver towards realizing that I liked hands-on stuff … I liked the kind of machines that we use to explore space and the air,” said Cleff, a mechanical and aerospace engineering major.

In her sophomore year, she heard about the supersonic wind tunnels in the Princeton Gas Dynamics Laboratory, and wondered what experiments she might do in a chamber that could move air faster than the speed of sound. For her thesis project, Cleff worked with Marcus Hultmark, assistant professor of mechanical and aerospace engineering, to design and test an aerospike nozzle: a structure on the end of a rocket engine that, in contrast to the standard bell nozzle, has the potential to markedly improve the rocket’s fuel efficiency. The wind tunnel allowed Cleff to simulate the rapid movement of air that occurs during a rocket’s launch through the atmosphere.

Engineers have long theorized that an aerospike, which directs the flow of combustion gas through the nozzle, would enable a rocket to operate more efficiently as air pressure changes with altitude, but few have demonstrated this experimentally. Cleff’s work represents a “clever way of doing it on a small scale,” said Hultmark, whose research group is building on the system that Cleff established.

This summer Cleff, who is also a founder of the Princeton Rocketry Club, will begin a position in rocket engine development at the satellite launch startup Virgin Orbit, where she interned in 2017. Testing real rockets is “the coolest thing that I’ve had experience with in my life,” she said. “It’s awesome to stand out in the middle of the desert and watch a rocket engine fire.” 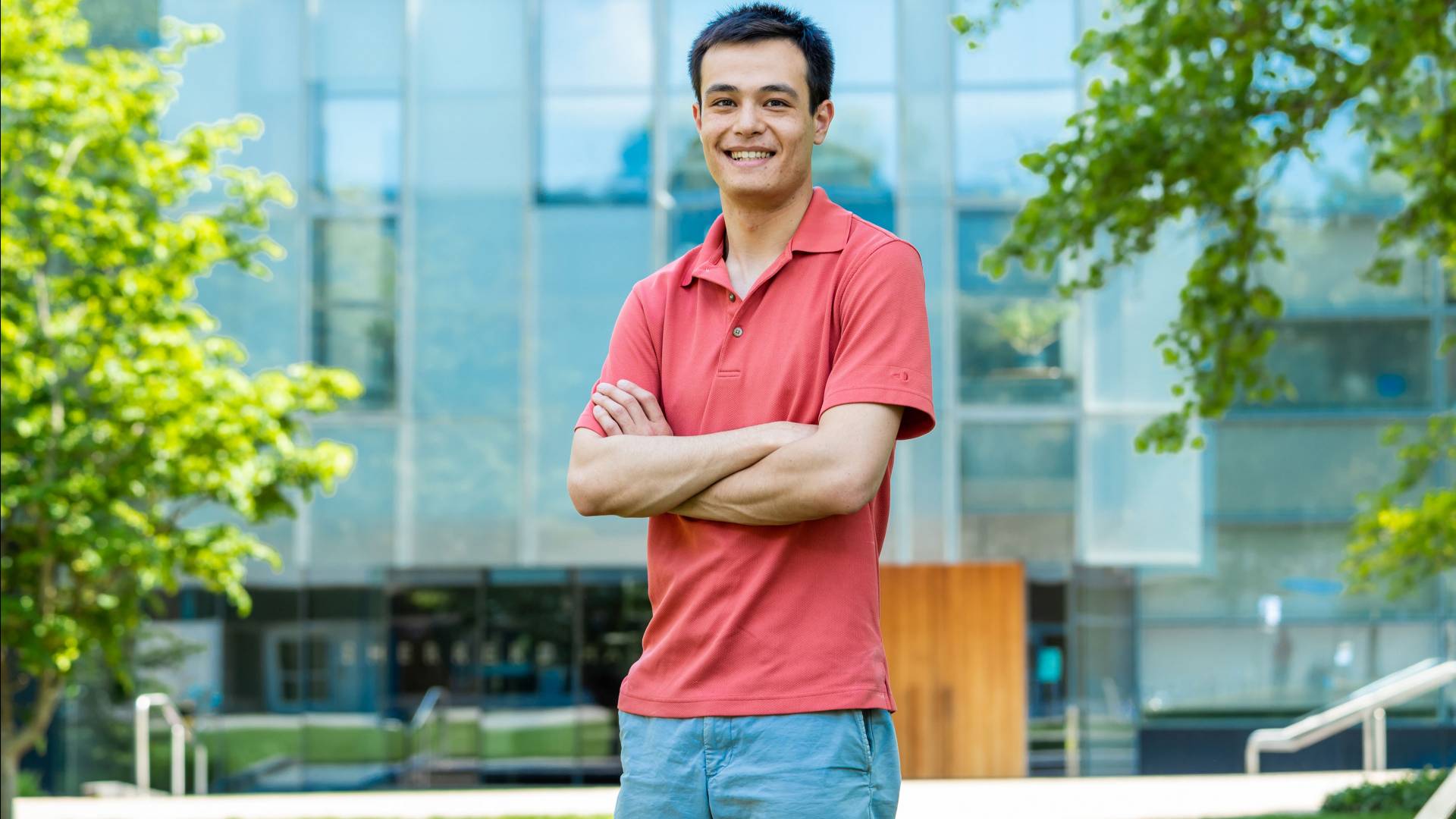 Evan Wood, an operations research and financial engineering major, examined methods to optimize energy use by the industrial gas company Air Liquide, which uses 0.1 percent of the world’s electricity.

Evan Wood sees a great opportunity in the uncertainty that comes with the rise of technologies like renewable energy and self-driving cars. Wood, who majored in operations research and financial engineering (ORFE), seeks to tackle the challenges of making smart decisions within complex, changing systems.

For his thesis project with Professor Warren Powell, Wood said he had the chance to take on a “massive, rich and messy problem” involving energy usage. Through a partnership between Powell’s research group and the multinational industrial gas company Air Liquide, Wood examined methods to optimize the company’s electricity and natural gas contracts as well as its plant operations by using Air Liquide’s industrial gas storage capabilities. Air Liquide uses 0.1 percent of the world’s electricity to produce pure hydrogen, oxygen, nitrogen and other gases for applications such as manufacturing, health care and electronics.

Energy prices and supplies are notoriously volatile, and have become especially unpredictable in Texas, the base for a large portion of Air Liquide’s production, thanks in part to the state’s growing adoption of wind power. Using an approach known as stochastic optimization, Wood wrote algorithms to generate policy options designed to maximize the profitability and reliability of the company’s operations within a system characterized by a high degree of randomness (or stochasticity).

Powell said he was impressed by the “elaborate piece of software” Wood built. “He did a very careful study of different configurations and ways to help Air Liquide handle the volatility.”

“I found this to be a really great exercise in understanding how you can take everything that you’ve learned and combine it together to solve a real-world problem,” Wood said. “It’s the whole reason why I joined ORFE in the first place.” 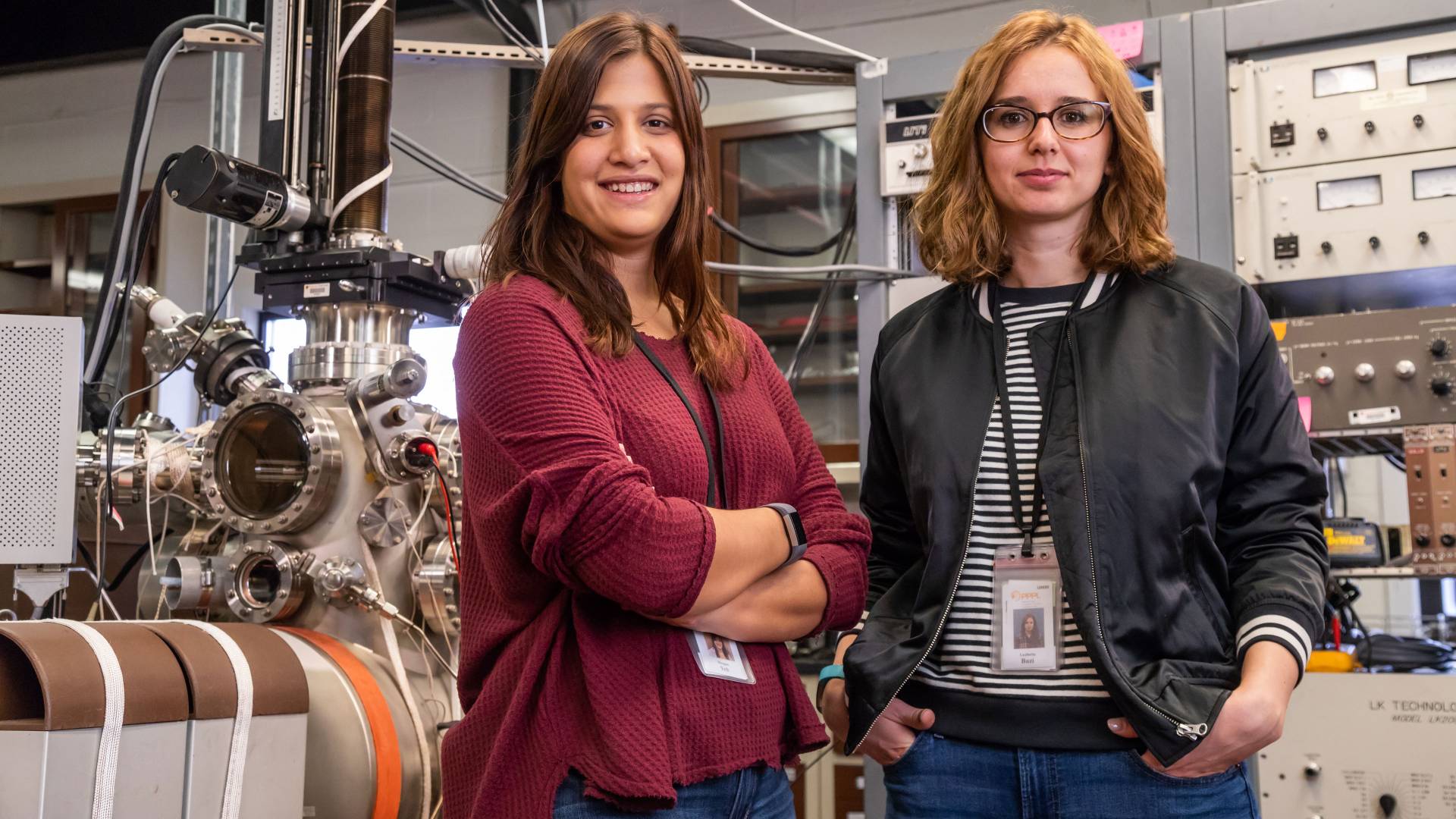 For her senior thesis, Meagan Yeh, left, a chemical and biological engineering major, worked with Luxherta Buzi, right, a postdoctoral researcher, and Professor Bruce Koel to test material for possible use in a fusion reactor.

Meagan Yeh, a chemical and biological engineering major, applied her training to explore possible options for bringing the use of fusion energy closer to fruition. After a summer working at the Princeton Plasma Physics Laboratory with Professor Bruce Koel and Samuel Cohen, the director of the Program in Plasma Science and Technology, she used her independent work to address one of the most difficult challenges facing fusion researchers: making the reactor’s walls able to withstand the heat and energetic particles from the reactions.

Koel suggested that Yeh join an effort examining a new approach that involves working with a special type of the metal tungsten, which is extremely hard and dense and has the highest melting point of any element.

Yeh said she was immediately interested. The material, a formulation called “nano-grained” tungsten, has promising properties. The proposal “was exciting,” she said. “It was challenging. It was intimidating.”

In nuclear fusion, enormous amounts of energy are released when two light atoms such as hydrogen isotopes fuse to make one slightly heavier atom such as helium. One proposed method for building a fusion plant involves reactions in superheated plasma that has been confined in magnetic fields. Plasma is an ionized gas made up of positively charged ions and negatively charged electrons.

To test the tungsten’s performance in conditions that simulated a fusion reactor, Yeh and Luxherta Buzi, a postdoctoral researcher in Koel’s lab, used state-of-the-art equipment at the University of California-San Diego. At the Princeton Institute for the Science and Technology of Materials, Yeh examined the tungsten samples for damage using a scanning electron microscope.