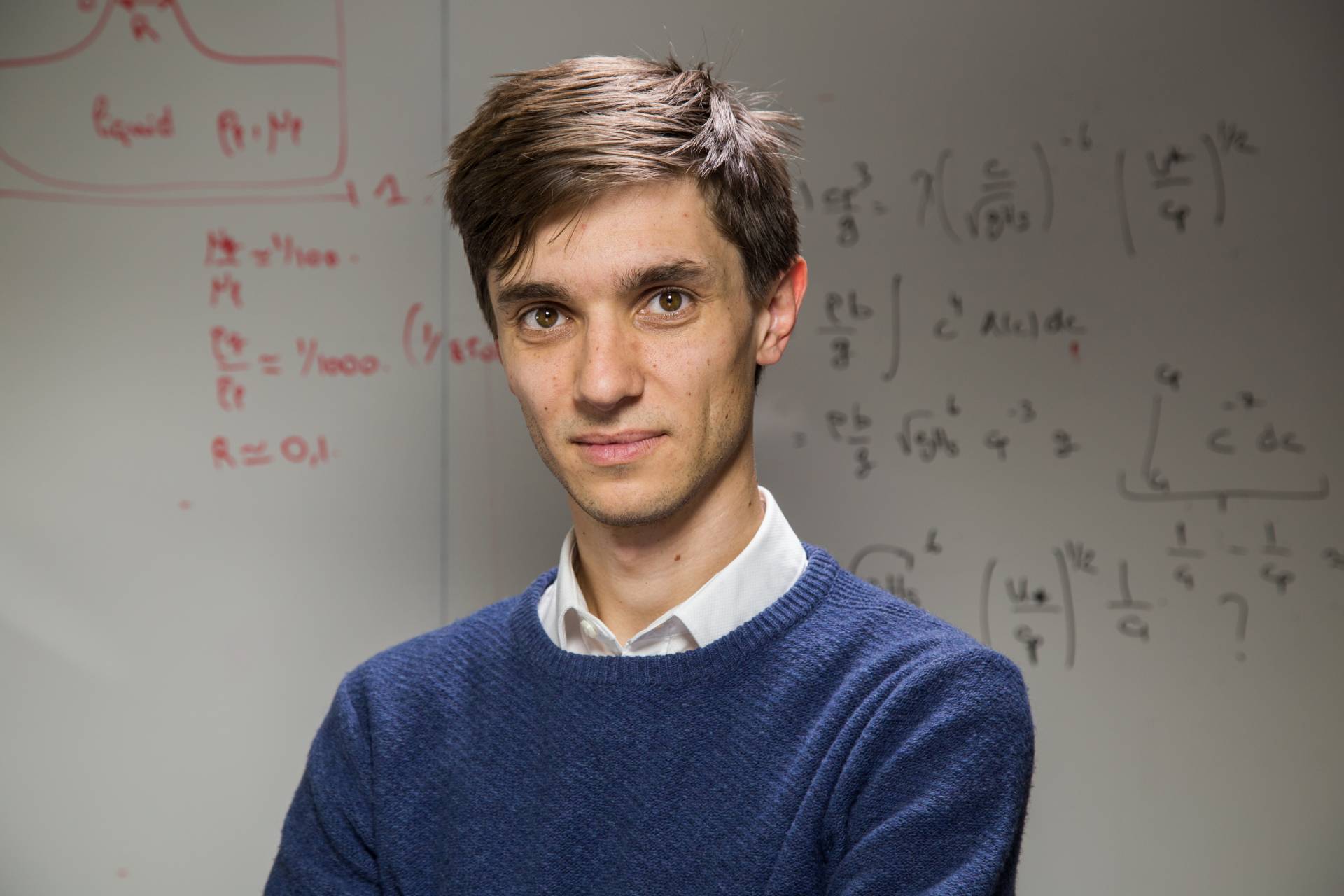 New research by Princeton's Luc Deike (pictured) and colleagues describes the velocity of aerosols cast upward as bubbles on a liquid's surface burst. Above the ocean, these droplets transfer moisture, salt and even toxins such as algae from water to air. Knowing the speed and height of aerosols applies to numerous areas of scientific and economic interest, including more accurate climate modeling or creating a perfect glass of champagne.

A day at the beach beset by heavy clouds or the sticky heat of a salty haze can seem like the work of large, unpredictable forces. But behind such atmospheric phenomena are billions of tiny interactions between the air and microscopic drops of saltwater cast upward as bubbles on the ocean's surface burst.

Research recently published in the journal Physical Review Fluids now describes the "jet velocity" of these droplets, or aerosols, as they occur in liquids such as seawater and sparkling wine. The researchers created a model for predicting the velocity and height of jet aerosols produced by bubbles from 20 microns to several millimeters in size, and in liquids as viscous as water or up to 10 times more viscous.

The "jet" refers to the liquid that spurts up after a bubble has burst. Once the dome-like film of the bubble is gone, the small cavity the bubble created beneath the surface rushes to close. The bottom of the pocket rises rapidly as the sides of it collapse downward. When these forces meet, they launch a jet of water into the air that contains droplets ranging in size from 1 to 100 microns (a micron is one-millionth of a meter; the diameter of a human hair is roughly 100 microns).

Droplets from bursting bubbles are the principal means by which aerosols are produced above the open ocean, said first author Luc Deike, a Princeton University assistant professor of mechanical and aerospace engineering and the Princeton Environmental Institute (PEI). Knowing the speed and height at which aerosols are being thrown into the air can be used for more accurate climate modeling or creating a perfect glass of champagne.

"We have a model that describes jet velocity in many types of liquids," Deike said, whose PEI Urban Grand Challenges project, "Extreme Wave Breaking in Coastal Urban Areas," supported the research. "If you know the liquid you're considering and the size of the initial bubble, we can tell you the size of the jet and the velocity of it."

The researchers used water and water mixed with glycerin to create a model for predicting the velocity and height of the droplets, or jet aerosols, cast upward as bubbles on a liquid's surface burst. In the illustration above, once the bubble is gone (far left), the small cavity it created beneath the surface rushes to close. When these forces meet (center), they launch a jet of water into the air (right) that contains droplets ranging in size from one to 100 microns.

In seawater, aerosols transfer moisture, salt and even toxins such as algae from the ocean to the air, Deike said. The researchers found that these bitsy bundles of elements and organisms can soar upward at speeds as fast as 50 meters per second (111 miles per hour) where they can be transported into the atmosphere.

"I'm looking at this process to provide a better explanation of sea-spray aerosols that can be used to feed atmospheric models," he said. "The idea is to have something that's more physical and more precise. This is something at a small scale that affects large-scale atmospheric processes, such as cloud formation and radiative balance. If you have a harmful biological agent on the water that's releasing toxins, those toxins can become part of the atmosphere."

Deike and his co-authors used experimental results — based on water and glycerin mixed with water — and numerical predictions to create their model. The researchers found that viscosity is everything — at a certain point, a liquid, such as honey, becomes so thick that aerosols are no longer produced. At the same time, the "sweet spot" in terms of bubble size in water is about 20 microns. Bubbles smaller than 10 microns or more than 4 millimeters produce no jet aerosols after they burst.

Co-author Gérard Liger-Belair, University Professor of chemical physics at the University of Reims Champagne-Ardenne, who studies dissolved gases and bubble dynamics in champagne and sparkling wine, said that the researchers' work applies to numerous areas of scientific and economic interest.

Play video:
Play Video: So much depends on the velocity of tiny droplets cast upward

The researchers found that aerosols can soar upward at speeds as fast as 50 meters per second (111 miles per hour). Knowing the speed and height of aerosols can be used for more accurate climate modeling or even creating a perfect glass of champagne. Aerosols from bursting bubbles are the primary way in which moisture, salt, and even toxins are transferred from oceans to the atmosphere. In sparkling wine, the first (and largest) droplet ejected transports the aroma above the rim of a glass and to the nose of its consumer, so maximizing this droplet is a priority for the wine industry.

"This article shows that the fine interplay between bubble size and various liquid parameters — mainly its viscosity, density and surface tension — has an impact on the aerosol produced by a bursting bubble," said Liger-Belair, who wrote the 2013 book "Uncorked: The Science of Champagne," published by Princeton University Press. "This paper is indeed universal, and the conclusions can apply to the sea spray produced in oceans or the aerosols produced above a glass of sparkling wine."

In wine — which is about twice as viscous as water — the first (and largest) droplet ejected transports the wine's aroma above the rim of a glass and to the nose of its consumer, Liger-Belair said. For the billion-dollar industry he studies, maximizing this droplet is a priority. This published work could be used to alter glass geometry, levels of dissolved carbon dioxide, or even wine viscosity — which a consumer would not notice — to enhance bubble size, velocity and, thus, the "aroma experience," he said.

"Being able to predict the best parameters of the glass and sparkling wine in terms of aroma release through the action of bursting bubbles is indeed a significant advance," Liger-Belair said. "The champagne industry could benefit from the results of this paper, which, for the first time, presents a detailed description of jet velocity formed by bursting bubbles for a wide range of physical parameters."

The researchers' next steps are to specify the size of the aerosols as well as quantify the number of droplets released, Deike said.

"This piece of work tells you the velocity and projection of aerosols, but we are working on how many droplets there actually are," Deike said. "It may seem like there are too many to count, but we still need to count them."