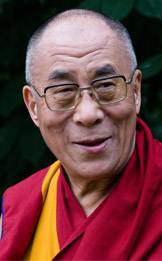 His Holiness the 14th Dalai Lama is participating in two events at Princeton University on Tuesday, Oct. 28. He will give a public talk on compassion titled "Develop the Heart," and he will participate in a conversation with students and faculty on Princeton's informal motto, "In the Nation's Service and in the Service of All Nations."

Photo by Tenzin Choejor, Office of His Holiness the Dalai Lama

His Holiness the 14th Dalai Lama will discuss the importance of compassion and service in two events at Princeton University on Tuesday, Oct. 28. Both events will be streamed live on the Media Central Live website. The Dalai Lama, the most well known figure in Tibetan Buddhism, will give a public lecture and participate in a dialogue with students and faculty.

"To some, he is an important religious leader; to others he is an advocate for justice and autonomy for the Tibetan people; to still others he is a powerful moral voice on many issues, including the environment, interfaith understanding and community service," said Rev. Dr. Alison Boden, Princeton's dean of religious life and the chapel.

In the first event at 9:30 a.m. in Jadwin Gymnasium, the Dalai Lama will give a public talk on compassion titled "Develop the Heart" and answer audience questions. Free tickets have been distributed to students, faculty, staff and Princeton area residents.

At 1:30 p.m., the Dalai Lama will join a select group of students and faculty members for a conversation on Princeton's informal motto, "In the Nation's Service and in the Service of All Nations." The students have met in small groups to discuss service, and will meet after the Dalai Lama's visit to continue the discussion. In addition, Princeton is coordinating with the Campus Compact civic engagement network, inviting 400 college student groups on the East Coast to watch the live stream to reflect on the meaning of service.

Click the text above to go to the live stream player on the Media Central Live website.

"Our hope and goal is that his teachings while he is here will be profoundly impactful and meaningful to those who hear him," Boden said. "For some that might mean new ways to think about practicing compassion (the subject of his morning talk), or a renewed dedication to community service, or a more intentional link between faith and service (the subject of his afternoon talk). We hope, too, that his visit will promote greater interfaith understanding and cooperation."

When the Dalai Lama arrives at Jadwin Gym, a welcoming rice ceremony will take place in which he will bless the campus, a Buddhist custom traditionally done when visiting homes to cleanse them of evil elements and bless them for goodness.

On the stage with the Dalai Lama, a sacred Tibetan painting called a thangka — with a representation of Buddha and four disciples — will be displayed.

The visit is co-sponsored by Princeton's Office of Religious Life and the Kalmyk Three Jewels Foundation. The Kalmyk community's ancestors, who came from the Kalmykia Republic of Russia, helped bring Tibetan Buddhism to the United States when they arrived in 1951. The Howell, New Jersey-based foundation works to maintain and strengthen Kalmyk language, religion and tradition around the world.

Throughout the semester, special lectures and weekly meditation events have been offered. At Forbes College, for instance, students worked on sand paintings for several weeks, and attended an Oct. 17 talk by Tibetan Buddhist monk Geshe Lobsang Dhargey on sand mandalas.

Since Saturday, Oct. 18, two Tibetan Buddhist monks from the Sera Mey Monastery in India have been building a sand mandala on campus. Students have been watching the monks at work, and conversing with them in Chinese and English about the mandala's meaning.

Mandalas, painstakingly created grain by grain, depict different aspects of Buddhist beliefs. Shortly after they are finished, they are dismantled, symbolizing the impermanence of life. The sand then is poured into a nearby river or stream, so that its blessings and energies can be carried throughout the world.

Students in Princeton's Forbes College have been learning about Tibetan Buddhism through sand mandalas. (Video by Danielle Alio, Office of Communications)