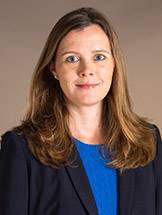 Regan Crotty, director of student life at Wilson College at Princeton, has been appointed to the new position of Title IX administrator at the University.

Crotty will have primary responsibility for implementing the University's Sex Discrimination and Sexual Misconduct Policy. She will support Title IX programming and training on campus; investigate student, faculty and staff cases with others; and prepare documentation for the U.S. Department of Education's Office of Civil Rights (OCR). The federal Title IX statute prohibits discrimination on the basis of sex under any education program or activity receiving federal funds.

"We are very pleased that Regan Crotty will be taking on the responsibility of coordinating the University's response to sexual misconduct and Title IX," said Michele Minter, vice provost for institutional equity and diversity. "She has an ideal set of skills and experiences drawn from her work with students on our campus, as an investigator, and as a lawyer in private practice. The University is committed to providing a safe, supportive community, and Regan is particularly well suited to lead our efforts."

Before beginning her assignment at the Wilson residential college in November 2012, Crotty worked as the University's first external investigator for the Office of the Vice President for Campus Life, looking into allegations of student violations of University policy and preparing cases for disciplinary hearings. She also conducted investigations of student, faculty and staff Title IX grievances.

She was interim executive director for planning and administration in the Office of the Vice President for Campus Life from March to August of 2012.

From 2003 until coming to the University, she was a general litigation associate at Dechert LLP law firm. She handled class action, employment, and civil rights cases, among others.

"I am eager to begin working as Title IX administrator," said Crotty. "I know that our students, faculty and staff are committed to a Princeton that is welcoming and inclusive for all members of the community, and I look forward to supporting these efforts."

Crotty is a member of Princeton's Class of 2000 and received a law degree from the University of Chicago in 2003. She will begin her new duties working part-time for the Office of the Provost, reporting to Minter, as of Dec. 1 and transition fully in mid-January.

Earlier this month, the OCR concluded an investigation of Title IX complaints filed against Princeton in 2010 and 2011. The office released a resolution agreement (PDF) that when fully implemented will bring the University into full compliance with Title IX as it applies to sexual harassment and violence.