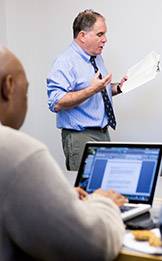 Miguel Centeno, the Musgrave Professor of Sociology, is the head of the Global Systemic risk research community, which is working to better understand the nature of risk, the structure of increasingly fragile systems and the ability to anticipate and prevent catastrophic consequences.

There's a risk, for example, that volcanic ash will damage aircraft engines. So when a volcano erupted in Iceland in April 2010, concerns about the plume of volcanic ash disrupted air travel across Europe for about a week. Travelers, from the Prince of Wales to Miley Cyrus, were forced to adjust their plans.

In the interconnected world of the 21st century, that risk also put Kenyan flower farm employees out of work because their crop couldn't reach Europe, and forced Nissan to halt production of some models in Japan because certain parts weren't available.

Welcome to global systemic risk, where virtually every person on Earth can be affected by disruption in interdependent systems as diverse as electricity transmission, computer networks, food and water supplies, transportation, health care, and finance. The risks are complicated and little understood.

A core group of about two dozen faculty members from across the University — along with postdoctoral research fellows, graduate students, undergraduates and outside researchers — has come together for a three-year research effort focused on developing a comprehensive and cohesive framework for the study of such risks.

The Global Systemic Risk research community, with financial support from the Princeton Institute for International and Regional Studies, is working to better understand the nature of risk, the structure of increasingly fragile systems and the ability to anticipate and prevent catastrophic consequences.

"You can't isolate any of these systems," said Miguel Centeno, the Musgrave Professor of Sociology and head of the research community. "They're all complex systems complexly put together. We've been running this unique experiment for the past 50 years or so, and we're all dependent on it continuing to work."

The goals of the community, now in its second year, include research, course development, conferences and even a movie series that will give the public a chance to use popular disaster films as a point of entry to discuss the serious issues of systemic risk.

Thayer Patterson, a research fellow who has worked closely with Centeno to establish the research community, said the work that emerges should be useful not just for academics, but also policymakers, leaders in business and finance, and the public.

"This isn't just an academic pursuit; it's an intellectual exercise that has the potential for real consequences in terms of making our systems stronger and more robust to the inevitable shocks that they will experience," Patterson said.

Policymakers, for example, may learn more about the ways dangerous unintended consequences can arise from seemingly sensible laws and regulations, Patterson said. And business leaders may better understand the importance of realistic risk assessment.

"We want to celebrate the risk takers and the inventors and their innovations that have made our lives better," Patterson said. "We are by no means risk-averse, but we hope to provide more information to people on the robustness and fragility of systems." 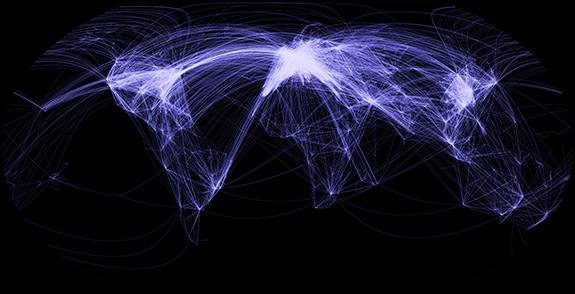 What are the most fragile global systems? Centeno points to two that concern him the most: the Internet and global health.

While the Internet itself is fairly robust by design, Centeno said, many other crucial systems — such as electrical grids, financial institutions and transportation systems — rely on the Internet, and a catastrophic failure there could quickly have dangerous effects worldwide.

And the ease of global travel today raises the risk that disease can spread unchecked around the world before health authorities have an opportunity to react, he said.

"We now have the conditions under which we could create some kind of pandemic very quickly that we would not be able to resolve," Centeno said.

The research community includes faculty members from 17 academic departments and five interdisciplinary programs at Princeton. Each brings his or her own background and approach to the topic.

Adam Elga, a professor of philosophy, said he has been interested in the topic of risk for several years and previously co-taught a course on the philosophy of extreme risk. That course piqued his interest in the idea of cascading failures, in which a series of small failures builds within a system and results in a catastrophic failure.

Elga is conducting a series of experiments this year with financial support from the research community that examines how individuals assess risks in situations where there is a small, but real, risk of catastrophic failure.

Elga's hypothesis is that many experiment participants will struggle to accurately account for the risk of catastrophic failure. In the same way, Elga said, policymakers and the public can be lulled into complacency by the fact that important global systems haven't experienced catastrophic failure — even though the risk is real and the potential consequences devastating.

"There is some evidence that people aren't going to be scared enough by the bad outcomes until they've already been hit by one," Elga said. "But once you get hit by a really big one, it's too late and the game is over." 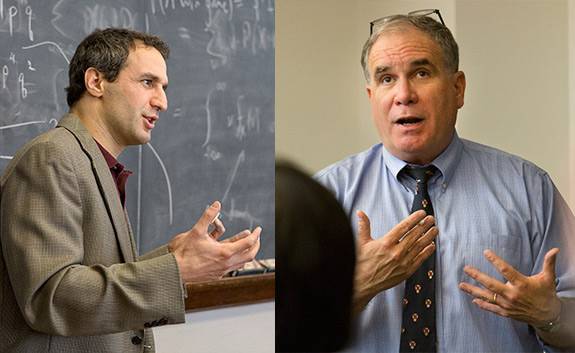 Adam Elga (left), a professor of philosophy, is conducting a series of experiments this year with financial support from the research community that examine how individuals assess risks in situations where there is a small, but real, risk of catastrophic failure. Centeno (right) says systemic risk is a topic that doesn't lend itself to easy answers. "Maybe the way to approach this isn't that we need a better financial system or a better food system. Maybe we need a better system as a whole," he said. (Photo of Elga by Brian Wilson; photo of Centeno by Denise Applewhite, Office of Communications)

Elga said he has derived benefits from the research community beyond direct support for his work.

"It's been stimulating to hear people from adjacent fields such as psychology, to talk to people who have thought about this from mathematical and engineering perspectives," he said.

Another participant is Stanley Katz, a lecturer with the rank of professor in public and international affairs, who has begun applying ideas about risk from the research community in his study on philanthropy.

How does a major philanthropic donor, for example, decide between spending $100 million in Africa on bed nets, which have a known effect on the transmission of malaria, or spending the same sum on an unproven vaccine that could either be much more effective than bed nets or be a total failure? Such decisions, Katz said, are based, in part, on assessments of risk.

"The field hasn't ordinarily been studied this way," Katz said. "This is relatively new language, and this is one of the things that appeals to me about the project. I'm learning a lot from scholars in social sciences who are much more accustomed to working with the language of risk."

Vu Chau, a member of the Class of 2015, is an undergraduate fellow with the research community and received funding for summer research on risk-related topics. The economics major is working to understand the impact that policies the Federal Reserve implemented in response to the 2007-08 financial crisis had on emerging markets.

"Before the crisis, the common thinking was that we need only design policies and regulations that focus on individual agents such as banks, because the larger system would be safe if each of its components is safe," Chau said. "However, the crisis taught us that even when individual parts act prudently and follow regulations, the whole system can fail under certain conditions. This is precisely why systemic risk is dangerous and deserves the kind of attention it is getting."

Systemic risk is a topic that doesn't lend itself to easy answers, Centeno said.

Warning systems — such as better measures of financial risk to avert another financial crisis — can be helpful but are limited.

Regulations — such as environmental rules to slow global warming — can cause unintended problems.

Safety nets — such as redundant equipment on power grids — are expensive and can actually increase risky behavior.

Shut-off switches — such as quarantines to limit the spread of disease — are practically and ethically challenging.

So while the research community won't be able to solve the problems of systemic risk during its three-year term, Centeno said its role is both clear and important: "The task of a research community is to create interdisciplinary conversations about a set of problems or issues so you can better understand what you're looking at. That's what we're trying to do."