Former President Jimmy Carter put a spotlight on the mistreatment of girls and women around the world during a speech Wednesday, Dec. 3, in the Princeton University Chapel that offered both distressing statistics and reasons for hope.

Carter spoke from the chapel's pulpit to about 800 students, faculty, staff and community members on the topic of his new book, "A Call to Action: Women, Religion, Violence, and Power," before answering questions from the audience, including what advice he would give President Barack Obama and what universities can do to reduce sexual assaults on campus. 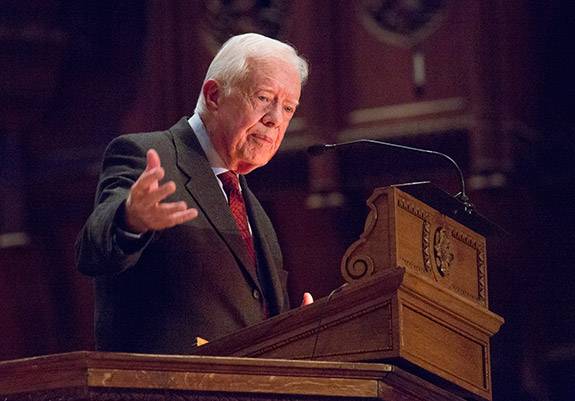 Former President Jimmy Carter speaks to about 800 students, faculty, staff and community members about the mistreatment of girls and women around the world on Wednesday, Dec. 3, in the Princeton University Chapel. (Photos by Amaris Hardy, Office of Communications)

Alison Boden, dean of religious life and the chapel, introduced Carter as "a person of profound religious faith."

"My humble observation of him is that he believes religion is about what is noblest in human beings," Boden said. "It is what calls us to our highest purposes and brings us closest to the divine. The manipulation of religion to support human rights abuses is its deepest betrayal."

Following Boden's introduction, the University's Whig-Cliosophic Society, the world's oldest college political, literary and debate society, awarded Carter its James Madison Award for Distinguished Public Service, highlighting the work of the Carter Center, established by the former president in 1982, in advancing human rights and alleviating human suffering around the world.

"While every president has accomplishments to be proud of from their time in office, few have continued to serve the public with such dedication and vigor since leaving office," said Adam Tcharni, president of the group and a member of the Class of 2015. "President Carter revolutionized what it meant to be a former president." 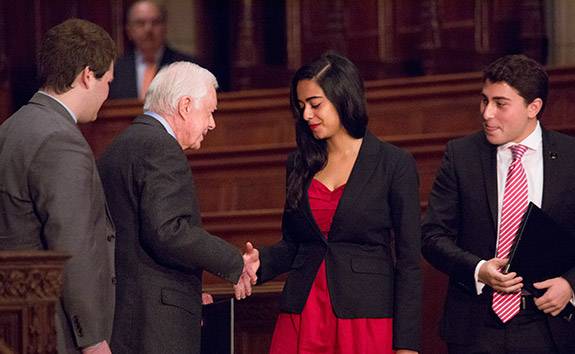 Carter said his interest in the plight of women and girls grew from his travels with his wife, Rosalynn, which have taken him to more than 140 countries.

"We have learned increasingly from one year to another that the greatest unaddressed, sometimes unadmitted violation of human rights is the deprivation of equal opportunities for girls and women," Carter said.

"Women and girls face horrible prospects in life in most countries in the world," Carter said.

He cited statistics that highlight his concerns:

Carter said that such mistreatment is often based on, or supported by, misreadings of religious texts.

"You can pick out a verse or two in there that say women should be subservient or inferior. And some of the great religions interpret the scriptures now to mandate that in the eyes of God women are inferior," Carter said, noting restrictions by Catholic and Baptist churches on the role of women.

Carter said he believes in equal treatment of women.

"There is no verse in the Bible that you can find that shows Jesus Christ didn't treat women equally to men," he said. 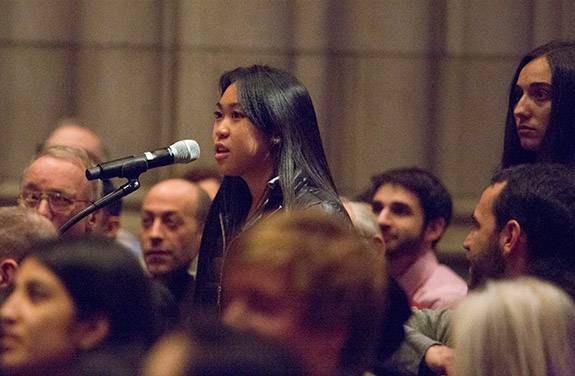 Members of the audience asked Carter questions including what advice he would give President Barack Obama and what universities can do to reduce sexual assaults on campus.

Turning his focus to the United States, Carter criticized how the military and universities handle sexual assaults.

"Almost every university administration is very reluctant to admit that on my campus girls are sexually assaulted," Carter said. "And so the policy of most universities is, if a girl is raped let's give counseling, let's don't make a public issue of it, let's don't take it to the local authorities, let's just look the other way."

And in the military, Carter said, few rapists are charged in sexual assault and military rules give commanding officers too much power over the handling of such cases.

Carter said one key to improving treatment of women and girls is for individuals to make it their personal responsibility.

"Whatever your sphere of influence might be, small or large, let your voice be heard to stop these crimes against your mother, your sister or, in the future, against your daughter. I don't know of a more important issue," Carter said. "I hope you will join me and many others around the world in trying to bring this criminal activity to [the] attention of leaders and to make sure they do something about it."

Asked during the question-and-answer session about what steps can be taken to reduce sexual assaults on college campuses, Carter said universities should be subject to severe penalties for mishandling cases.

"I think when universities reach the point of investigating adequately and turning the cases over to police it's going to resolve itself," he said.

In response to a question about what advice he would give Obama overall, Carter touched on the need for personal involvement by the president to handle issues such as Middle East peace talks, but he also acknowledged that he doesn't have much of a relationship with the president.

Ella Kesaieva, a junior majoring in politics, said she appreciated Carter speaking passionately on the treatment of women and the role of religion.

"I just wrote my junior paper on religion and human rights, so it was very interesting to come and hear what he had to say on it," Kesaieva said as she waited for Carter to sign a copy of his book. "I was very impressed and moved by it, too."