With passion and humor, Iranian human rights activist and Nobel Peace Prize laureate Shirin Ebadi called for an intellectual response rather than military action against religious fundamentalism in a talk Thursday, Dec. 4, at Princeton University.

"What counts is to eliminate the grounds that these type of people thrive on," such as illiteracy, said Ebadi, who spoke in Farsi with friend Shirin Ershadi serving as translator. "Western countries should use the budget that they allocate to fight groups like ISIS to building schools. Instead of throwing bombs on ISIS, we have to throw books at them. 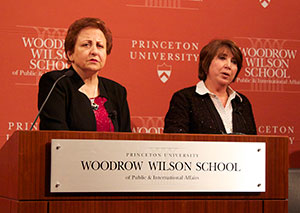 Shirin Ebadi (left), an Iranian human rights activist and winner of the 2003 Nobel Peace Prize, discusses the ways individuals, media and governments can work to balance human rights and religious beliefs, with the help of her translator, Shirin Ershadi. (Photo by B. Rose Huber, Woodrow Wilson School of Public and International Affairs)

"We have all witnessed how the terrorists are scared of schools. Look at what happened to Malala Yousafzai," said Ebadi, referring to the Pakistani teenager who was shot by the Taliban for advocating for girls' education and who was a co-recipient of the 2014 Nobel Peace Prize.

Ebadi, who won the Nobel Prize in 2003, is a lawyer who has fought for democracy and human rights, particularly for women and children. Ebadi visited Princeton's Woodrow Wilson School of Public and International Affairs Dec. 3 and 4 as the 2014 Joseph S. Nye Jr. '58 International Lecturer. Her visit also was part of the Wilson School's Leadership Through Mentorship program, in which prominent policymakers visit the school for several days to meet with students.

Introducing Ebadi, Wilson School Dean Cecilia Rouse called Ebadi "one of the world's notable champions of human rights" and said, "She has dedicated her life to protecting and defending Iran's most marginalized and vulnerable."

Ebadi was Iran's first female judge, but she and all other female judges were removed from their posts after Iran's 1979 revolution. She was able to return to private practice as a lawyer in 1992, defending many controversial political and human rights cases against the government. Using some of her Nobel Prize award funds, she established the Center for the Defenders of Human Rights in Iran. She has not returned to Iran since 2009 due to heightened pressure on human rights activists.

Updating the interpretation of religious laws

Ebadi began by talking about the widespread existence of discrimination and violence against women, listing examples of widows shunned in India, genital mutilation in Liberia, domestic violence in Italy and economic inequality in Finland, as well as legal inequality and terrorist kidnappings in Islamic countries.

"Unfortunately, I have to say, in all countries of our world and all of our societies, violence against women still exists. But it appears differently in different countries and different societies," she said.

Similarly, religious fundamentalism and violence exist in many countries, Ebadi said, giving examples of the persecution of Muslims in Myanmar, Chechnya and China. But as a Muslim woman, she said, she wanted to specifically address whether Islam and Shariah — Islamic law — call for violence against women.

At its birth, Islam afforded women more rights than they had in Arab countries, such as giving them the right to inherit property, she said. While laws governing the relationship with God, such as rules about praying or fasting, cannot be changed, those that deal with people's relationship to society should be modernized, Ebadi said.

For example, she said, adultery by women is not accepted in Shariah, but the penalty should be adjusted from stoning, which was prevalent 15 centuries ago, to financial penalties in a divorce, and should be applied for both men and women, Ebadi said.

"This way the general spirit of the law regarding adultery will be preserved but the punishment is changed according to the time that we live in," Ebadi said. "On the basis of the same argument, modern Muslims believe that they can change many rules of the Islamic law and bring them up to the standard of human rights.

Governments will not be able to defeat fundamentalist ideology with military action, pointing to the United States' 13-year fight against the Taliban in Afghanistan, Ebadi said.

"Young people should know that violence is contagious, and if we resort to violence, we will see violence," she said.

Instead, "we can and should live in peace and in friendship," Ebadi said. "This world may be like a dream today, but let's not forget that dreams have been the source of many movements in the world."

In the question-and-answer session, freshman Omid Abrishamchian asked Ebadi what the United States' role should be in on the world stage. She said that as a leading power, the United States should accept and participate in international legal conventions, such as the International Criminal Court, and U.S. citizens should vote for politicians who respect international law.

"I liked the fact that she's very outspoken in her opinions, and she brought her answer to our level too, in terms of how we should vote," said Abrishamchian, who plans to major in operations research and financial engineering. "Anytime you have the chance to hear a Nobel Peace Prize laureate talk, it's an opportunity worth taking."

During her visit, Ebadi met with students over lunch, dinner and coffees; attended an undergraduate class, "Civil Society and Public Policy," taught by Stanley Katz, a lecturer with the rank of professor in public and international affairs; and had multiple one-on-one meetings with students during office hours. In total, about 125 students had the chance to meet with her in small, off-the-record settings to discuss her work, students' career paths and policy issues.

Magda Anchondo decided to attend the talk after being inspired by Ebadi during a lunch meeting the previous day. Anchondo, a Master in Public Affairs student, co-chairs the Gender and Policy Network at the Wilson School and her work focuses on adolescent sexual and reproductive health.

"I particularly liked her emphasis on discrimination and violence against women. I liked how she touched on it on a universal spectrum, and how she got into the crux of how it's one thing for Western governments to say that it's wrong and then to also collude with them in commercial engagements," she said. "Reproductive health has also been fraught with a lot of talk of discrimination against women in the United States and internationally, so it was good to get a more cerebral view of things that are going on rather than tackling a specific issue."

Leadership Through Mentorship program visitors this fall have included former president of Ireland Mary Robinson, who is now the United Nations Special Envoy for Climate Change, and Princeton alumnus David Risher, president of Worldreader, a nonprofit that aims to improve global literacy rates by providing e-readers to schools in the developing world.