As part of his international outreach since becoming president of Princeton University in 2013, Christopher L. Eisgruber traveled to Israel Dec. 29-31 to meet with alumni and strengthen academic connections.

The itinerary included visits to the Interdisciplinary Center Herzliya (IDC) outside Tel Aviv, and to Technion — Israel Institute of Technology, in Haifa.

More than 115 alumni representing a wide range of class years attended the reception and dinner in Herzliya on the evening of Dec. 30. It was the largest gathering of Princeton alumni in Israel and the first time a Princeton president hosted an alumni gathering in the country. It was Eisgruber's third visit to Israel; he visited with his family in 2011 and attended a scholarly conference at the Israel Democracy Institute in 2012. 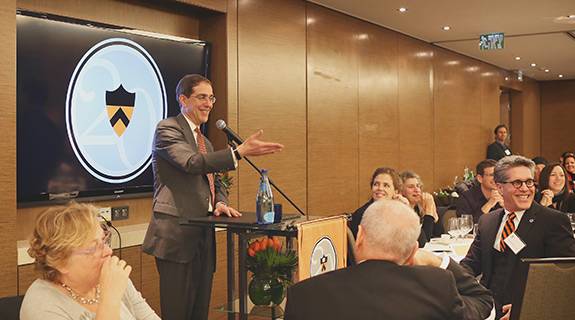 Christopher L. Eisgruber addresses alumni at a reception and dinner in Herzliya, Israel, on Dec. 30 as part of his international outreach since becoming president of Princeton University in 2013. Eisgruber traveled to Israel Dec. 29-31 to meet with alumni and strengthen academic connections. His itinerary included visits to the Interdisciplinary Center Herzliya (IDC) outside Tel Aviv, and to Technion — Israel Institute of Technology, in Haifa. (Photos by Tali Dovrat Photography)

"Israel is a place that has special meaning for me and for my family, and I was delighted to meet with Princeton's engaged and growing alumni community in that country," Eisgruber said. "We had a spectacular turnout, and the gathering was lively and spirited."

Eisgruber spoke to alumni about important initiatives at the University, including Princeton's commitment to financial aid and the development of the arts neighborhood. He also underscored the University's emphasis on international initiatives, and highlighted the vibrancy of Jewish life on campus. 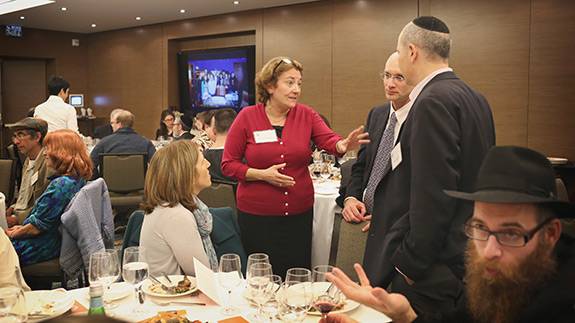 Alumni take the opportunity during the dinner to catch up with one another and to learn about initiatives at the University.

"I am pleased that my trip also afforded me an opportunity to meet with the presidents and other academic leaders from the Interdisciplinary Center in Herzliya and the Technion in Haifa, which are — along with other leading universities — important partners for us," added Eisgruber. "I was impressed both by the distinction and by the values of the people with whom I spoke. This region faces critical challenges in the years ahead, and Princeton's international scholarly and teaching mission will require it to build its engagements with Israel and the Middle East more broadly."

Eisgruber's visit to the IDC centered on conversations and meetings with its leadership, including founder and president Uriel Reichman; Alex Mintz, director of the IDC's Institute for Policy and Strategy; and Aharon Barak, a professor of law and former president of the Israeli Supreme Court.

"As a constitutional scholar, I was thrilled that my visit to the IDC included conversations with Justice Barak, who is famous for his humane and egalitarian interpretation of Israel's basic laws, and with Professor Amnon Rubinstein, who played a critical role in creating those laws," Eisgruber said.

More than 115 alumni attended the reception and dinner. It was the largest gathering of Princeton alumni in Israel and the first time a Princeton president hosted an alumni gathering in the country.

During his visit to the IDC, Eisgruber also met former Israeli Prime Minister Ehud Barak, Supreme Court Justice Yoam Danziger, former deputy governor of the Israeli federal bank Zvi Eckstein, and Chairwoman of the Science Division of the Israeli Academy of Sciences and Humanities Ruth Arnon, among others.

In fall 2015, Princeton students concentrating in the Woodrow Wilson School of Public and International Affairs will be able to study at the IDC, taking courses with an international focus dealing primarily with the Middle East.

On Dec. 31, Eisgruber visited Technion, the oldest university in Israel, to meet with President Peretz Lavie and faculty members. Eisgruber also took a tour of the university's Zisapel Nanoelectronics Center. Princeton and Technion researchers have a long history of collaboration in science and engineering.