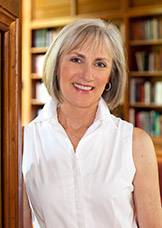 Cherrey, who has overseen a wide range of student activities and services at Princeton since 2010, will assume her new duties Sept. 1. As a board member and officer, she has been involved with the ILA, a global organization for people who practice, study and teach leadership, since its inception in 1999.

At Princeton, she oversees the Office of the Dean of Undergraduate Students, the Department of Athletics, Career Services, University Health Services, the Office of Religious Life and the Pace Center.

"During her five years at Princeton, Cynthia Cherrey has been a creative and energetic leader for the Office of Campus Life," said Princeton President Christopher L. Eisgruber. "She has improved Princeton's residential life in many ways, including through innovative programs to support mentorship and women’s leadership.

"Cynthia has also recruited outstanding talent to Princeton, and she has been a visible presence at innumerable student events. I am grateful to her for these and many other contributions to Princeton, and I wish her every success in her new role. The International Leadership Association has made a spectacular appointment by choosing Cynthia Cherrey as its chief executive."

Of her accomplishments at Princeton, Cherrey said she was particularly proud of developing a strong and capable staff; collaborating with administrative and faculty colleagues to develop programs and services for undergraduate and graduate students; and strengthening leadership and learning opportunities beyond the classroom.

"It has been such an opportunity and gratifying experience to work with extraordinary campus life, academic and administrative colleagues and exceptional students who impact the world in greater proportion than their numbers," Cherrey said.

Prior to coming to Princeton, Cherrey was vice president of student affairs, dean of students and a clinical professor at the A.B. Freeman School of Business at Tulane University.

From 1989 to 2003, Cherrey worked at the University of Southern California, serving ultimately as an associate vice president for student affairs and as a clinical associate professor in the Rossier School of Education.

In addition to her duties at Princeton, Cherrey has in recent years served in a limited role as president of the ILA. In her new role, she will work full-time directing the organization, which holds conferences and programs in the United States and around the world.

"I have seen the ILA grow from an idea to bring together leadership scholars to an independent 501(c) organization with over 2700 leadership scholars, educators and practitioners from around the world.  I am excited to devote my full attention to the ongoing strategic growth of the ILA," Cherrey said.

Cherrey has published in the areas of leadership, organizational development and higher education.  She is a fellow at the World Business Academy and a recipient of a J.W. Fulbright Scholarship. She earned her Ph.D. in communication studies with a concentration in organizational leadership and management from the University of Denver.

Princeton Executive Vice President Treby Williams will direct the search to find a successor to Cherrey.